Please ensure Javascript is enabled for purposes of website accessibility
Log In Help Join The Motley Fool
Free Article Join Over 1 Million Premium Members And Get More In-Depth Stock Guidance and Research
By Nicholas Rossolillo - Oct 23, 2019 at 6:19AM

Shares might look cheap, but paying off debt is a hard thing to do.

2019 has been billed as a transitional year by AMC Entertainment's (AMC -13.91%) management. It's the year that Stubs A-List -- the company's subscription service answer to the now-defunct MoviePass -- came into its own; the company started screening National Football League games at select theaters; and it recently became the first theater to take a stab at home entertainment by launching on-demand movies and TV shows.

The world's largest cinema chain is testing new ideas, and it's driving decent enough growth in a mature industry. In fact, management said the company's Stubs A-List program is already profitable. But profits overall have been subdued during this period of "transition", and debt is high from its acquisition spree of Odeon & UCI, Nordic Cinema Group, and Carmike Cinemas a couple years ago. This could be a long-term value stock but probably not the stable dividend play income investors are looking for. 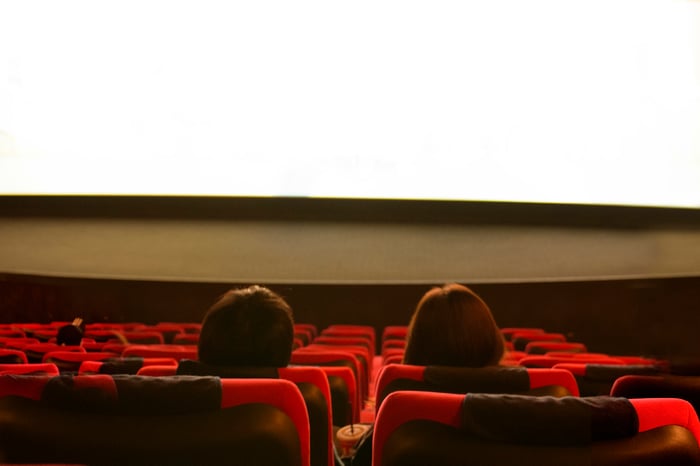 First, let's address the video on-demand launch. It's impressive that AMC has cobbled together relationships with nearly all major studios and content creators to create its own at-home entertainment offering. Nevertheless, being in the game doesn't ensure success, especially during a time when streaming is getting so crowded. Virtually all of the major studios will have their own digital offerings by next year.

But it's worth a shot. AMC's website and apps are popular, they're on track to get over one billion views this year. Its Stubs rewards program has over 21 million members, and the A-List subscription service should surpass one million members. There's a decent chance the company picks up the occasional rental or purchase from one of those consumers from time to time. A Netflix killer it is not, though.

And all of the aforementioned projects -- as well as a few more theater seating and screen upgrades -- are seriously eating into the company's bottom line. Through the first half of the year, net cash from operating activities is down 48% to $154 million, and adjusted free cash flow (money left after basic operating and capital expenditures) is $50.3 million, compared with $187.3 million during the first half of 2018.

The bottom-line -- cash flow especially -- has been in the red at times in the last year. Management did recently say that full-year expectations for capital expenditures should be $415 million and will be reduced further to $300 million in 2020, providing at least some cushion for the nearly $21 million in dividends paid out each quarter (good for a juicy 8.7% annualized yield as of this writing). Still, I hesitate to say this is a buy for those seeking income, as that payout could be at risk if profitability doesn't improve next year.

Moderating expenses, but debt is high

An expense reduction plan is also in the works, which is expected to yield an extra $50 million in operating income in 2020. All of this is part of AMC's plan, announced during its investor day back in April, to get profits back in gear and reduce debt.

It's going to be an uphill climb, though, especially with negative free cash generation over the last 12 months. The good news is that the price to book ratio is at 0.72 (below 1.0 would indicate AMC is undervalued based on the worth of all of its assets), but debt hasn't budged much from its peak. 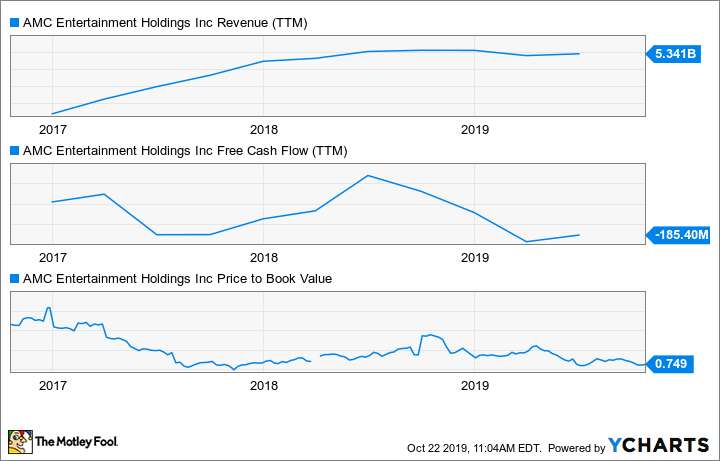 At some point, the company will need to turn a corner and use its theater industry leadership and new entertainment projects to get the books back in order. There's a lot of competition out there for consumers' downtime, and there's no guarantee this will all work out for the company.

So while shares aren't a screaming value, they aren't such an incredibly high-risk proposal at this point that I'd say walk away and never look back. This one is worth watching, but beware: Things could head south real quick if tight profit margins and high debt don't reverse course soon.