Taco Bell recalled 2.3 million pounds of beef from restaurants in 21 states because metal filings were found by a customer, and though the Yum! Brands (NYSE:YUM) Mexican food chain seems to have moved swiftly and exhibited an abundance of caution with its response, this still could weigh heavily on its performance.

Because the recall comes so soon after Taco Bell's "tortillapocalypse," when it ran out of the tortillas used across most of its menu, the beef recall could raise concerns in consumers' minds about the efficacy of the food, leading to a cascade of events such as struck its fast-casual rival Chipotle Mexican Grill (NYSE:CMG). In Chipotle's case, an outbreak of food-borne illness ended up decimating sales and causing the stock to crater. 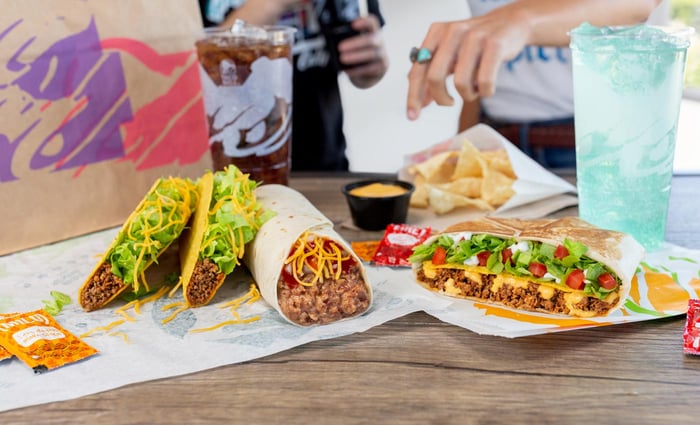 Overwhelming response to the problem

Taco Bell said the seasoned beef recall started when it received a complaint from a customer who reported finding metal shavings in his food. The beef is used in the Mexican food chain's taco and burrito dishes.

As soon as the first report came in, Taco Bell said it began removing possibly contaminated beef from all restaurants in states where it had been shipped. While only three complaints were ultimately received, according to the Food Safety & Inspection Service of the U.S. Agricultural Department, and no illnesses or adverse reactions were reported, the Taco Bell supplier Kenosha Beef ordered a recall.

It's a comprehensive response by the Yum! Brands restaurant to what looks like an isolated issue, and one that was really beyond its control. Yet the E. coli-related and other food-borne illness outbreaks that swept over Chipotle might also have been beyond its control, though it did end up changing some operational practices as a result.

For example, to prevent E. coli and norovirus bacteria from spreading, it began dipping onions in boiling water to kill germs before employees began chopping them, and raw chicken is now marinated in resealable plastic bags instead of in bowls.

Customers, of course, were getting sick at Chipotle, and that hasn't happened at Taco Bell, and the tortilla shortage simply meant customers couldn't get their favorite menu items. Although it had an impact on sales, as it lasted nine days, the shortage wasn't material to results because it was a limited event, just like the seasoned beef recall.

Yet if these types of issues continually arise, the customer is no longer thinking about what to buy at the restaurant, but rather wondering what's wrong with it now. First it ran out of tortillas, now it's out of beef. What's next?

Taco Bell's North American president, Julie Masino, said in a statement, "Nothing is more important than our customers' safety, and nothing means more to us than their trust. As soon as we received the first consumer complaint, we immediately acted to remove the product from the affected restaurants and proactively worked with the supplier to inform the USDA of our steps to protect our guests."

Serving 290 million pounds annually, Taco Bell is a large beef purchaser (McDonald's is the biggest, buying 1 billion pounds a year), so the current issue affects less than 1% of its total. It shouldn't have an impact.

But Taco Bell has had problems before, including an E. coli outbreak in 2006 that did hurt sales, and it has been sued over its beef in a lawsuit that alleged the meat was 65% filler and just 35% beef. The lawsuit was eventually dropped, but it cost the restaurant operator as much as $4 million to run advertising to defend against the allegations and repair its reputation.

The seasoned beef shortage might not materially hurt sales, but coming on the heels of the tortilla shortage, it might hurt the company's image in consumers' minds.