Finding a quality company with a dividend yielding over 4% is easier said than done. The average dividend yield in the S&P 500 is 2.2%. But high-yielders are out there and Royal Dutch Shell (NYSE:RDS.A) (NYSE:RDS.B), Verizon Communications (NYSE:VZ), and Dow Inc. (NYSE:DOW) are three that are worth a look. Each yields over 4%, dominates its respective industry, and has a P/E ratio under 16, offering a balance of income and value.

Shell is the top integrated oil and gas company for generating cash flow and returning earnings to shareholders. Its success comes from investing in major projects across its upstream, integrated gas, and downstream sectors to achieve the advantage of scale, all while paying a dividend that yields 6.5%.

Although these major projects are capital-intensive and take several years to become profitable, Shell's industry-leading $22.64 billion in levered free cash flow proves that this strategy works. Levered free cash flow is the amount of money that is left over after a company pays its operating expenses and debt payments, and it can be used to pay a dividend, buy back stock, or invest in the business.

Another key metric to look at is the payout ratio, which is found by dividing dividend per share by earnings per share. The payout ratio tells you what percentage of earnings the company is spending on its dividend. The lower the payout ratio the better. Shell's 76% payout ratio is lower than BP's 94% and ExxonMobil's 80%, making Shell's dividend all the more attractive. Total and Chevron have 72% and 60% payout ratios, respectively. Shell is also the cheapest supermajor, with a P/E ratio of just 12.0.

Shell has emerged as one of the most diversified integrated oil and gas companies thanks to continual investment throughout the company's three main business sectors: upstream, integrated gas, and downstream. Starting in 2018, Shell's integrated gas business became the dominant sector in the company's portfolio, replacing downstream to make up the majority of net income for the last six quarters. Shell is an energy company with the ambition to attempt projects at unprecedented scale and scope, proving management's ability to find value in creative ways.

Verizon and AT&T dominate the wireless communications landscape. Verizon has a 4.1% yield with a 63% payout ratio compared to AT&T, which yields 5.3% but with a hefty 86% payout ratio. On top of that, Verizon's 24% operating margin crushes AT&T's 15.8%. Operating margin is a good way to tell how efficient a business is.

Unlike gross margin, operating margin factors in operating expenses, which include advertising, marketing, and general and administrative expenses. Verizon's 24% operating margin means that the company is taking home an impressive $0.24 of operating profit for each dollar of net sales.

Verizon is one of those coveted, low-volatility companies that has benefited from one of the greatest tailwinds of the past decade: the rise of the cellphone. It started with unlimited talk and text but has grown to unlimited data that consumers now view as necessary Most people know Verizon and it's a popular stock, but many are leery of buying Verizon near its all-time high. Don't be one of those people. If you are hesitant to buy Verizon now, consider putting it on your watch list. 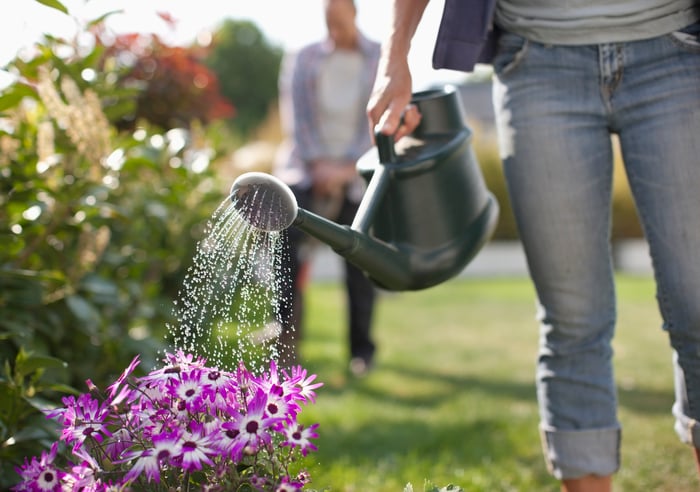 Even since its spinoff from DowDuPont in late March 2019, Dow shares have been all over the place -- as high as 24% above the spinoff price and as low as 17% below it. That's some serious movement for an industrial company of its size. Part of the volatility is due to investors trying to make sense of Dow's new business. Unlike the conglomerate DowDuPont, Dow is a streamlined and focused maker of coatings, paints, solvents, lubricants, packaging, and specialty polymers. The company operates three core segments, with its packaging and specialty plastics division, which includes Styrofoam, generating the most sales.

Dow had a rough second quarter in 2019 due to margin compression in polyethylene, isocyanates, and siloxanes. Almost all of Dow's chemical products are tied to basic feedstocks, most notably crude oil. The cyclical nature of Dow and its tethering to feedstocks and global trade make the company vulnerable to the volatile commodity prices and trade tensions that have plagued the market of late.

In Q2, Dow noted it had tightened its expense and capital spending. That's a positive step.

The company reported Q3 results on Oct. 24 and CEO James Fitterling noted during the conference call with analysts:

...our results in the third quarter demonstrate the Dow team's focus on managing the levers within our control while also making progress against our operational, financial and strategic priorities that we laid out for the new Dow at our Investor Day last year. At that time, we presented a clear set of priorities and targets along with a playbook to drive our execution. Since then, we have been diligently delivering on that plan.

In the third quarter, we achieved top-line performance that was in line with our guidance and bottom line results that exceeded expectations. In doing so, we delivered strong improvements from Q2 to Q3 across the board, EBIT margin, earnings and free cash flow.

The new Dow will have a reduced cost structure and lower capital expenditures than DowDuPont. This should pave the way for a focused portfolio that has higher free cash flow and lower volatility than its peers. Additionally, Dow yields 5.8% and has an 83% payout ratio, which is a little on the high side but gives the company time to adjust to its return to independence. Strong management and the highest dividend in the Dow Jones Industrial average pave the way for a positive long-term future for Dow.

Shell, Verizon, and Dow give you three completely different stocks that all yield over 4%. Most importantly, all three companies are able to pay their dividends without severely impacting the business. These three stocks are poised for success for years to come.