Please ensure Javascript is enabled for purposes of website accessibility
Log In Help Join The Motley Fool
Free Article Join Over 1 Million Premium Members And Get More In-Depth Stock Guidance and Research
By Daniel Foelber - Oct 24, 2019 at 6:49AM

Does the stock's decline represent a buying opportunity?

Andrew Carnegie would be turning in his grave if he knew what was going on with U.S. Steel (X -3.83%) in 2019. Once a blue chip member of the S&P 500 that traded above $190 a share, the company's stock has fallen more than 90% since than high. What's worse, the company's risks outweigh its reward even at these depressed levels.

Risk No. 1: The global economy

Since President Trump's steel tariffs took effect in March 2018, U.S. Steel has lost around 70% of its value, as well as announcing hundreds of layoffs and multiple disruptions for plants across America. The company's poor performance and outlook have resulted in negative average analyst-estimated earnings per share in 2020.

U.S. Steel is plummeting despite the Trump administration's promise to revitalize the struggling coal and steel industries. The 25% tariffs on imported steel were meant to insulate the domestic steel market from competitors to prevent layoffs and return to a growth mindset. The opposite took shape. So far, the tariffs have dissuaded the market from investing in steel companies, leading many to believe that the industry can't survive without protection from tariffs. Also hurting the industry are declining flat-rolled and tubular steel prices, U.S. Steel's two core product segments. 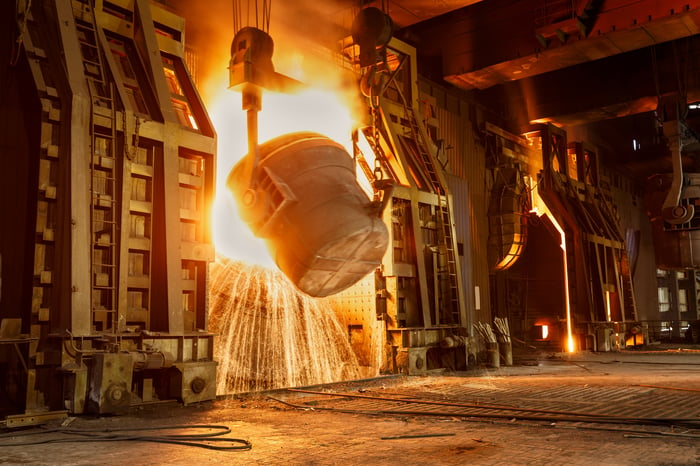 Risk No. 2: The business model

Trump's tariffs aren't the only thing hurting U.S. Steel. The company would be particularly susceptible to an economic slowdown or even a recession due to its reliance on high output, high demand, and lack of competition. Like competitor AK Steel Holding, U.S. Steel's blast furnaces rely on high output levels to make a profit. If prices fall, demand weakens, competition increases, or a variety of the three occurs, more output is needed to turn a profit. On the other hand, competitors Nucor and Steel Dynamics operate using electric-arc mini-mills. Unlike massive blast furnaces, electric-arc mini-mills can be more easily switched on and off, allowing for ebb and flow based on demand and prices.

The underlying problem with U.S. Steel is that the company needs everything to go right or else things fall apart. In the current environment, U.S. Steel has been forced into desperation mode, scrambling to achieve higher output even with low steel prices.

Unfortunately, this leaves U.S. Steel caught between a rock and a hard place. The company can choose two paths: close down plants, lay off workers, reduce spending, and hope the market recovers or invest in growth to improve operations. U.S. Steel has tried to walk a fine line by doing both simultaneously, most recently with its $700 million bet on Big River, which will be funded entirely with debt. The acquisition will result in higher output levels for U.S. Steel, as well as exposing the company to the coveted electric-arc technology that has bolstered Nucor and Steel Dynamics. But at what cost? U.S. Steel is already struggling to bounce back from its European woes after posting a mere $13 million 2Q 2019 adjusted EBITDA in its European segment compared to $136 million in 2Q 2018. Additionally, U.S. Steel's management is investing heavily on advanced strategic projects that are expected to earn annual EBITDA benefits of nearly $400 million over the next three to four years. Although the company is currently on time and on budget, it has already spent $320 million of capital on 67 projects so far in 2019, raising the question: Is expensive investment the right decision at this time? U.S. Steel's net debt has ballooned to over $2 billion, exceeding the company's market capitalization of $1.83 billion.

For 30 years now, U.S. Steel has had an awful track record of return on invested capital (ROIC). ROIC compares the profit that a company generates to the amount it spends on assets to generate that profit. As a result of this poor performance, U.S. Steel has a total return (share price appreciation plus prior dividend payments) of negative 15% over the past 30 years. The next 30 years don't look much better. Even if tariffs subside, the European market improves, and demand increases, U.S. Steel's business model remains vulnerable over the long term. It's best to stay out of it, even though the stock's decline can appear tempting.