Please ensure Javascript is enabled for purposes of website accessibility
Log In Help Join The Motley Fool
Free Article Join Over 1 Million Premium Members And Get More In-Depth Stock Guidance and Research
By James Brumley - Oct 24, 2019 at 9:49AM

The restaurant chain has been doing well of late, but this new Chipotle isn't close to matching its former fiscal glory.

Credit has to be given where it's due. Tex-Mex chain Chipotle Mexican Grill (CMG 1.06%) has almost fully recovered from its 2015 E. coli debacle. Even after this week's post-earnings stumble, the stock's still trading above its 2015 peak, and revenue is heading into record territory. The only missing ingredient is profit. Margins remain suppressed as the company has to spend more to drive growth.

And it's no small problem. Last quarter's net income of $98.6 million was 7% of the restaurant chain's top line, well up from 3.1% for the same quarter a year earlier. But it's still a far cry from the near-12% profit margins the company had when it was firing on all cylinders four years ago.

That makes Chipotle a very tough investment play to step into right now.

On track, but not there just yet

Food contamination scares are nothing new for the restaurant industry. But somehow, Chipotle suffered an inordinate amount of fallout from being pegged as the epicenter of a 2015 outbreak of E. coli that sickened 55 people in 11 states. The company didn't do itself any favors by turning defensive, and by being belligerent with the Centers for Disease Control over its effort to prevent the contamination from spreading. 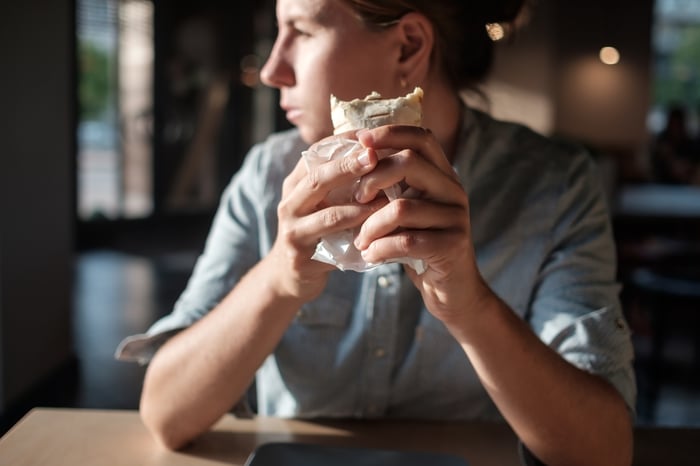 Much has changed in the meantime. Founder and then-CEO Steve Ells stepped down in late 2017, replaced by Brian Niccol, who had been serving as CEO of Yum! Brands (YUM -1.32%) unit Taco Bell. Although Taco Bell's menu is more value-based than Chipotle's, Niccol brought some helpful, relevant ideas. Two of his top focal points: better marketing and communications, and using digital technology to grow sales.

The former has taken shape, largely without consumers noticing. They just responded. The latter has taken shape as well, although that evolution is still underway. While digital sales still only accounted for less than one-fifth of last quarter's revenue, they were up nearly 88% on a year-over-year basis. More online and mobile sales growth is in the cards, too, as about half of the 80-plus restaurants now under construction are being built with a so-called Chipotlane for fast pickup of pre-ordered food.

It's going to be a while before income will grow enough to justify the stock's current price near $785, though. In fact, it could take so long, shares may need to pull back first. Timing is everything.

Too expensive for this much clarity

Kudos to investors willing to step into Chipotle in late 2017, when things seemed most grim. The stock's now up more than 200% from that low, driven by an effective turnaround. Gutsy buyers paid a frothy price but were well rewarded for being brave enough to buy in when the future was uncertain.

Matters are far more certain now. The rebound plan has worked. But the stock is presently priced at more than 71 times its trailing per-share profit, and is still valued at nearly 45 times next year's expected bottom line. That's the kind of price one would expect to pay when there's lots of risks related to the unknown, but lots of potential rewards. Most of the turnaround tactics are already on the table. The risk premium is apt to fade, and sooner rather than later.

Sure, this year's expected sales growth of 13% and next year's top-line outlook for growth of more than 12% is impressive, and next year's earnings are expected to improve at an even faster clip of 30%. Even looking into 2021's analyst expectations for a per-share profit of $22.23, though, the stock's priced at a rich 35 times its projected income. The 2021 projected bottom line of $609 million is still only 8.8% of forecast revenue as well. 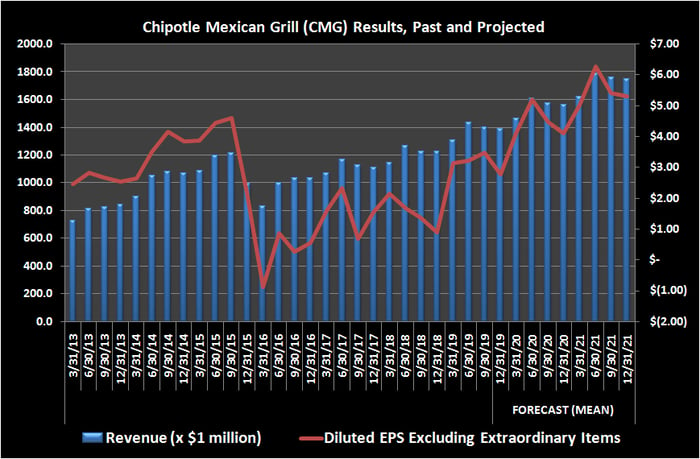 It's going to take a lot of big-time earnings beats for the market to keep the stock propped up at that sort of valuation. For perspective, industry powerhouse McDonald's is only trading at 20-something times its past and projected earnings, while the aforementioned Yum! Brands shares are priced at a comparable earnings multiple in the mid-20s. Even a more premium-leaning restaurant stock like Starbucks is sporting a P/E of less than 30, while Darden Restaurants shares are priced in the teens relative to earnings.

Niccol has led an incredible recovery to be sure, but the bulk of the benefit from it is now in the rearview mirror, and it's clear the restaurant chain is on the right track. That's likely to start putting real pressure on the stock's price.