Please ensure Javascript is enabled for purposes of website accessibility
Log In Help Join The Motley Fool
Free Article Join Over 1 Million Premium Members And Get More In-Depth Stock Guidance and Research
By Keith Noonan - Oct 25, 2019 at 8:06AM

Whether you're investing to create an extra income stream for retirement or are at earlier stages of your financial planning, dividend stocks can play an important role in preserving and building wealth. They should be evaluated and selected with your personal goals in mind, but striking a favorable balance between yield and the viability of a stock's underlying business is a fundamental aim that's at the core of successful income investing.

Not every stock that pays big dividends will wind up being a winner, and it's important to look for companies with strengths that will help keep payouts flowing, and valuations that position your investment to succeed over time. With that in mind, investors looking for dividend stocks with yields above 4% might find a lot to like about Altria Group (MO 1.18%), PPL (PPL 1.83%), and AT&T (T -0.50%). 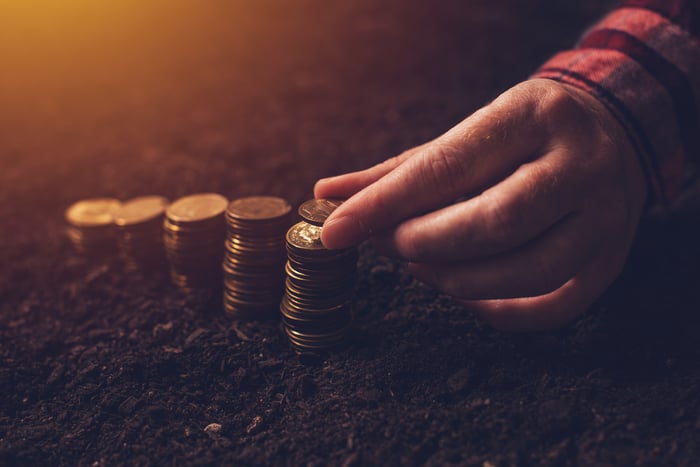 This stock has struggled as declines in cigarette sales have accelerated and some of the company's diversification efforts have been met with roadblocks. Its $12.8 billion investment to secure a 35% stake in e-cigarette company Juul has been cast in a different light following new regulatory concerns and the vape manufacturer's products being dumped by large retailers including Walmart, Kroger, and Walgreens.

Altria's stock performance has reflected investor concerns that the tobacco giant's paths to growth are narrowing. The challenges facing the company are front and center and have helped push its share price down roughly 35% over the last three years, but the stock presents appealing value for income investors at current prices.

Altria trades at just 11 times this year's expected earnings, and sports a 7.3% dividend yield -- levels that look appealing on a historical basis despite the issues at hand. The company has raised its dividend each year since splitting off from Philip Morris International in 2008, and its roughly 80% payout ratio actually looks pretty safe because tobacco companies tend to have relatively low capital expenditure needs.

Volume declines for cigarettes are concerning, but bearish sentiment appears to be overblown at present, and there's a good chance that worries in the vaping space will dissipate with time. Juul has recently moved to stop selling fruit-flavored nicotine pods for its e-cigarettes in the U.S. until the Food and Drug Administration has completed a review of vape products. The FDA action follows a rise in lung injuries and concerns that the products are being marketed to underage users, but a lasting ban remains unlikely.

Many of the lung injuries tied to vaping products appear to be connected to tetrahydrocannabinol pods (or THC, one of the main active ingredients in marijuana) or low-quality and counterfeit e-cigarettes. If that's the case, the regulatory threat to Altria's big bet on Juul could be less significant than feared. And while stricter ad standards may be put in place, they wouldn't close off growth in the vaping market.

Altria's cigarette volume sales will likely continue to fall as consumers in its core territories move away from smoking. But it still enjoys considerable pricing strength with its core tobacco products, and some of its diversification efforts have the potential to pay off in big ways. The company has exposure to the fast-growing marijuana space through its roughly 45% stake in Cronos Group, a roughly 10% stake in Anheuser-Busch Inbev, and a better outlook in e-cigarettes than many expect.

With its depressed valuation and big yield, this sin stock looks like a winner.

PPL is a utility company that provides electricity to roughly 10.5 million people across Pennsylvania, Kentucky, and the U.K. While the broader market has rallied over the last few years, the energy stock has dipped roughly 2% across the stretch. Shares have climbed roughly 15% in 2019, but they still pay a hefty 5.1% dividend and sport a 13.5 forward P/E that comes in well below the average for the electric utilities industry, which has a forward earnings multiple of roughly 20.

Investors have been hesitant to embrace PPL due to concerns related to Brexit, currency headwinds, and the potential for unfavorable new pricing regulations in the U.K. Share dilution hasn't helped, either.

With the company generating over half of its revenue and operating income from its overseas operations, new headwinds in the U.K. can be expected to substantially affect overall performance. But its big dividend and low earnings multiples suggest the business could be a winner for patient income investors.

Barring catastrophic scenarios, PPL should be relatively resilient in an economic downturn, and there's not much risk of new competitors moving into its key markets because of the high entrance costs and legislative barriers in the regulated utilities space. The business also has best-in-class service, winning J.D. Power's customer satisfaction award for eight years running.

PPL is undergoing a big infrastructure spending initiative, with $15.4 billion in capital expenditures earmarked from 2018 through 2022 to improve the security and efficiency of its energy grids.That might look like a lot for a company with a market capitalization of roughly $23 billion, but PPL projects that it will recoup these costs relatively quickly -- and periods of high capex are normal for the industry. The infrastructure spending will cycle down and should better position the company for long-term earnings growth and help pave the way for more payout hikes.

This has turned into a surprisingly exciting stock to follow over the last couple of years. Between the drama surrounding its acquisition of Time Warner and a subsequent antitrust challenge from the Justice Department, the stock's roughly 33% rally in 2019, and activist-investor firm Elliot Management's push to have it divest from both DIRECTV and the Warner segment, the telecom stock may finally be shedding its "boring" reputation.

While AT&T's acquisition of Time Warner has been criticized by some investors and analysts, the company is an even more impressive cash-generating machine following the combination, and it probably won't split off its main operating segments anytime soon. It expects to generate roughly $28 billion in free cash flow this year, putting it in good position to continue cutting chunks out of its debt load and paying big dividends.

Critics of the Warner acquisition have questioned whether there's actually significant value in combining telecom businesses with entertainment and content components. It remains to be seen how AT&T's integration of the entertainment unit will play out over the long term, and television subscriber declines following its big DIRECTV acquisition and disjointed push into the streaming space may add to the skepticism. But the move has better positioned the company to compete against rival telecoms, as well as emerging threats from tech leaders like Alphabet and Facebook.

In addition to service bundling opportunities, combining distribution with content gives the company access to a wide range of data that should help it scale its digital-advertising business. The global entertainment market still has plenty of room for growth, and AT&T's core mobile-services segment has promising catalysts as it rolls out its 5G network and expands its number of total connected devices by adding service for connected cars and wearable devices.

The telecom giant boasts a 35-year history of annual payout growth and a dividend yield that still comes in at 5.4% despite the stock's rally this year. AT&T's big gains might give some investors pause, but with shares trading at a reasonable 11 times this year's expected earnings, and feasible avenues to surpassing the market's growth expectations, the stock still looks like a worthwhile long-term investment.