A U.S. Army contract competition for a truck that can be parachuted out of a plane and driven off with an infantry squad has been narrowed to three finalists that are expected to deliver prototypes for review by Nov. 13.

Counting on teamwork to win

General Motors (NYSE:GM), the Oshkosh Defense unit of Oshkosh (NYSE:OSK), and Polaris Industries (NYSE:PII) are vying for a contract to build 651 Infantry Squad Vehicles (ISV) to provide mobility for a nine-soldier squad and its equipment to get close to a battle after being dropped by parachute from a Sikorsky UH-60 Black Hawk helicopter or a Boeing CH-47 Chinook. 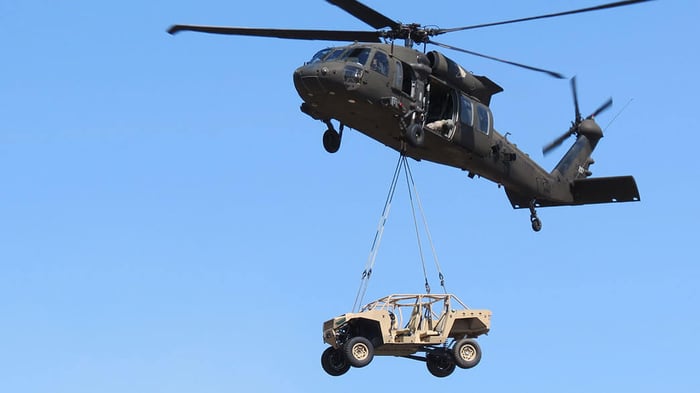 The contract will be awarded next spring for delivery to the Army between 2020 and 2024, and it could mean a total of 2,065 vehicles ultimately being built down the road. Each of the teams have been awarded $1 million to develop the prototypes.

Oshkosh Defense is paired with Flyer Defense, while Polaris is paired with Science Applications International (NYSE:SAIC). General Motors will be competing solo through its GM Defense division, which was reconstituted in 2017 after the automaker sold off its previous defense unit to General Dynamics in 2003.

As important as the contract is to the companies competing, it's especially important for the Army because the vehicles will allow it to deploy paratroopers farther from the site of engagement and allow them to drive in for the assault. It's safer than dropping them in much closer to the action and having them reach the battle on foot.

Guessing who might be the ultimate winner of the contract won't be easy, as each team brings unique advantages to the competition.

Oshkosh currently provides the Army with its mine-resistant armored cars called Joint Light Tactical Vehicles, or JLTVs, with contracts worth $20 billion to build tens of thousands of them over the coming decades. Its partner Flyer Defense previously joined with General Dynamics to deliver lightweight ground mobility vehicles (GMVs) to the Army.

Similarly, Polaris currently provides the military with a souped-up version of its civilian RZR ATV called the MRZR, the DAGOR, and Sportsman MV, all designed for ultra-light tactical military applications. It and Science Applications International, which has partnered with Polaris at various times over the years, will offer the DAGOR, with Science Applications providing technology integration for the vehicle. Polaris says the DAGOR already meets the weight and size restrictions imposed for delivering the ISV to the battlefield.

General Motors may have a more difficult time because it is trying to break back into the defense contract market. But it has developed two military-capable vehicles based off its popular civilian-market trucks, the Chevy Colorado and Silverado. A variant of the Colorado will be used for the ISV contract, which is a smart move since it is one of the most popular trucks GM sells, behind the Silverado and the GMC Sierra. Almost 100,000 Colorados have been sold so far this year, though that number is down from last year. It shows GM could build these ISVs at scale fairly quickly.

However, the strike at GM might not reflect well when it comes time to award the contract because it could portend labor strife and delays.

It's a potentially large contract beyond the initial run, meaning a win would benefit any of these vehicle manufacturers. All trade at relatively discounted valuations currently, though that has more to do with their primary end markets rather than their government contracts.

GM trades at just five times trailing earnings and forward estimates, but that's because the automotive market is slowing down considerably and sales are falling. The weakening truck market explains why Oshkosh is at about 10 times its earnings and a fraction of its sales. And even though Polaris stock just soared on a big earnings beat, allowing it to be valued higher than the others, it also trades at a fraction of its sales.

While we don't know the potential value of the defense contract, it would do more to invigorate or jump-start the defense business at Polaris and GM than it would at Oshkosh.