Please ensure Javascript is enabled for purposes of website accessibility
Log In Help Join The Motley Fool
Free Article Join Over 1 Million Premium Members And Get More In-Depth Stock Guidance and Research
By David Jagielski - Oct 25, 2019 at 9:30AM

Questions surrounding future growth for American Express have kept the stock from rising, despite an earnings beat.

American Express (AXP -0.14%) released its quarterly results earlier this month and it was evident that concerns about the economy haven't translated into softness on the company's financials -- at least not yet. In Q3, Amex came out with another impressive earnings beat.

During the quarter, AMEX saw its revenue (net of interest) reach $11 billion, which was an 8% increase from the prior year. CEO Steve Squeri stated in the earnings release that he was "pleased with the breadth and consistency of our revenue growth, driven by a well-balanced mix of cardmember spending, loans and membership revenues from our fee-based products, which grew 19% and exceeded $1 billion this quarter for the first time."

However, beating earnings hasn't been unusual for the company, as it failed to come in above expectations only two times over the past nine quarters. Squeri also pointed out that it was the ninth-straight period where revenues, when adjusted for foreign exchange, were up by 8% or more. 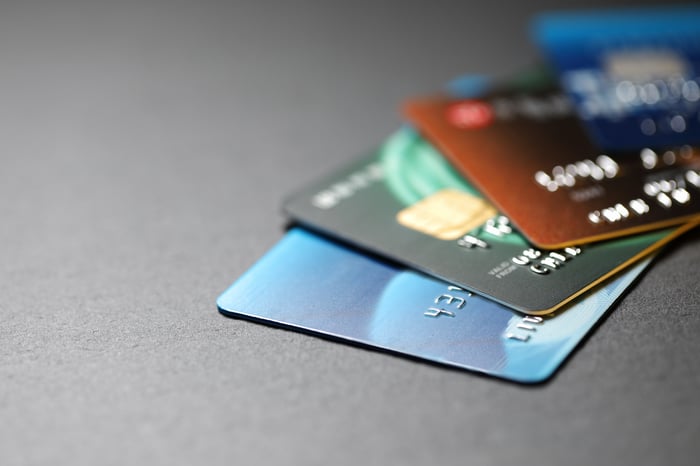 The most surprising thing about the company's results is that its global consumer services group (GCSG) segment saw the most revenue growth during the quarter, jumping 11% year over year. Global commercial services (GCS) were also strong but had noticeably lower growth at 6% year over year, and global merchant and network services (GMNS) were up 5%, as well. Net income told a similar story, with GCSG up 10% from last year, compared to just 4% growth for GCS and 3% for GMNS.

The big question, however, is how much longer these strong numbers can continue, especially if the economy struggles and the credit card-using public begins to adjust its spending habits. For now, it looks like GCS is the more likely segment to feel some of that pain.

Corporations are looking to reduce their spending

Despite the overall strong performance by the company, the combined spend by both consumers and corporations during the quarter came in at $308.2 billion, which was lower than the $313 billion that was expected by analysts. The problem is that the number could be getting softer in future quarters, and Squeri noted that companies have been looking to bring down spending, particularly when it comes to travel and entertainment. While corporate spending was down just 1% in Q3, investors are concerned that over the longer term, those declines could become much more significant in future quarters, especially if the economy struggles.

GCS didn't see any improvement from Q2 as sales of $3.16 billion in Q3 were actually slightly down from the $3.17 billion generated in the previous quarter.

While consumer spending still looks to be in good shape, it could face tougher times as well. Although there's no reason for concern just yet, it's something that investors need to be cognizant about, especially when investing in the company for the long term.

Results were not enough to get investors excited

Although the quarter wasn't bad by any means, it's evident from the reaction of stock traders that these results weren't enough to calm fears of bigger challenges ahead for AMEX. The stock hasn't made much progress since the earnings release and it even dipped 2% on earnings day. The lack of optimism for Q4, along with the company not raising its guidance, didn't give investors much reason to feel bullish.

Looking at the long term, it's difficult to ignore the headwinds that the company will likely face over the next year. While things may still be strong now, there are definitely reasons to be concerned that AMEX may not be able to keep this performance up for a lot longer. The danger is that if a downturn takes place, bank stocks and financial stocks like AMEX could be some of the heaviest hit, as not only could sales be adversely impacted, but there will be greater credit risks, as well, that will impact the company's bottom line.

Without a better outlook for the future, there's just not a compelling reason to buy AMEX today, even though it had a good performance in Q3.