Please ensure Javascript is enabled for purposes of website accessibility
Log In Help Join The Motley Fool
Free Article Join Over 1 Million Premium Members And Get More In-Depth Stock Guidance and Research
By David Butler - Oct 25, 2019 at 7:51AM

The course of the first nine months of 2019 has done very little for McDonald's. Revenue and earnings remain stagnant.

While McDonald's (MCD -0.09%) recent earnings miss isn't the end of the world, the larger trends within the company suggest the bullish run the company has experienced has limits. Yes, the stock has outpaced the market for most of 2019, but earnings and revenue growth remain rather unimpressive for this restaurant chain stalwart.

One big critique of McDonald's over the past few years has been the revenue impact of its refranchising efforts. McDonald's has worked to unlock earnings value by franchising corporate stores in an effort to cut down on its own operational costs. The effort has certainly worked, but it also limits long-term growth, as the addition of a franchisee reduces revenue intake at the same time it is cutting costs.

In the third quarter, McDonald's bucked the trend of stagnant revenue a bit but disappointed on the earnings side. Analysts had anticipated earnings per share (EPS) of $2.20, but McDonald's underwhelmed with a $2.11 EPS. The earnings mark was a minute increase from Q3 2018's $2.10 per share. McDonald's net income actually declined 2% to $1.61 billion, and the earnings uptick mostly stemmed from a 2% decrease in the number of shares outstanding. 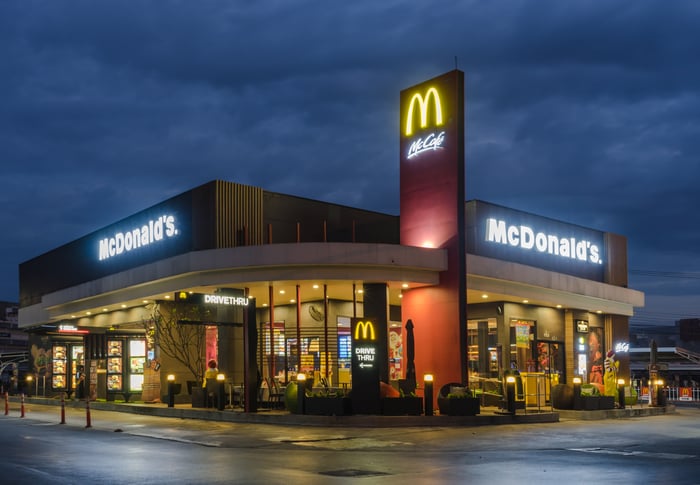 Revenue grew by 1% year over year to $5.43 billion. The overall trend has been one of declining revenue from corporate restaurants that has only partly been balanced by increases in franchise revenue. The 2019 Q3 quarter did deviate from that slightly as company-operated locations experienced a 4% decline in revenue, while franchise locations enjoyed a 5% boost.

Total global comp sales grew 5.9%, while systemwide sales increased by 5%. It's worth noting that systemwide sales would have grown 7% on a constant currency basis. This sales growth wasn't exactly what all investors had hoped for. Bearish analysts have pointed out that customer traffic in the United States is trending in the wrong direction, and that is putting pressure on overall comp sales potential.

Through the first nine months of the year, very little progress has been made.

When you take that broader look, it's easy to see why the stock price has slowed its pace over the last few months. Analyst estimates for full-year earnings are calling for $7.98 per share. That means the stock is trading at around 25 times forward earnings. With that premium for a stock that's barely growing its earnings, it's understandable that investors might be getting a little wary of overpaying for this one.

It's also worth noting that operating income is stagnant for the first nine months of the year. At $2.409 billion vs. $2.417 billion in 2018, this could be a very real indicator that McDonald's is struggling to find more value from its shift to fewer corporate-owned stores.

I am cautious about McDonald's at the moment. The company operates in an increasingly competitive industry and has relied heavily on a refranchising effort over the last few years to produce higher earnings. Competitors like Wendy's are getting in on the breakfast game, while other competitors are hopping on the plant-based meat craze. I'm skeptical as to how many non-meat burgers a fast-food chain will really sell. McDonald's seems to be behind the curve on that, as it has instead focused on streamlining its menu to improve service times.

It's going to take more than flat results to invigorate this stock to new heights. If the fourth quarter doesn't deliver something that can shift the full-year story to growth, McDonald's nice stock ride might be over.