Please ensure Javascript is enabled for purposes of website accessibility
Log In Help Join The Motley Fool
Free Article Join Over 1 Million Premium Members And Get More In-Depth Stock Guidance and Research
By James Brumley - Oct 26, 2019 at 10:15AM

The DOJ and FTC are working their angles, but a newly proposed ACCESS Act could achieve the intended result as well.

The Department of Justice and the Federal Trade Commission continue to probe Apple (AAPL -0.38%), Facebook (META -0.16%), Amazon.com (AMZN 0.13%), and Alphabet (GOOG 0.52%) (GOOGL 0.40%) breadwinner Google for evidence of efforts to maintain monopolies. Meanwhile, Congress has quietly introduced a bill that could at least address the privacy concerns surrounding social networking giants like the aforementioned Facebook, as well as Twitter (TWTR 0.16%). The Augmenting Compatibility and Competition by Enabling Service Switching Act of 2019, or ACCESS Act, aims to mandate a way for individuals to transport their personal information from one social media account to another.

Investors in these tech companies should be worried. Although the proposal has only recently been unveiled and may or may not become a law, it's another glimpse into the mindset of regulators and lawmakers. If not this bipartisan bill, one like it could eventually be squeezed through. A seemingly small tweak could open the door to competition the world's top social media platforms and tech names have thus far been able to keep at bay.

Senators Mark Warner (D-Virginia), Richard Blumenthal (D-Connecticut), and Josh Hawley (R-Missouri) are the authors of the bill Warner says will make it "easier for social media users to easily move their [personal] data or to continue to communicate with their friends after switching platforms." Perhaps more important in this case, "start-ups will be able to compete on equal terms with the biggest social media companies." 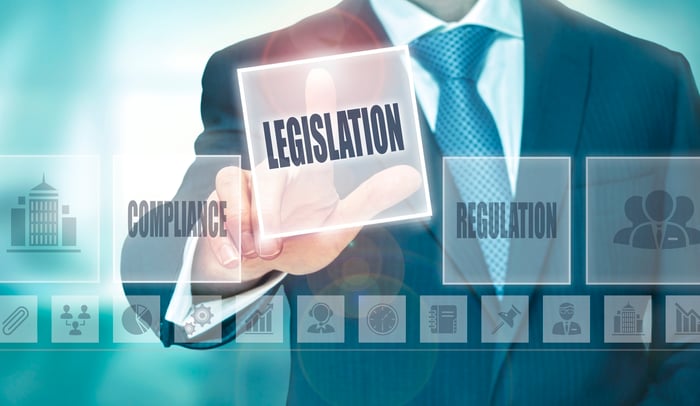 Social media users already have this option in a certain sense, but the proposed law will require web companies like Facebook and Google to develop a clear, uniform method -- with instructions -- for a newcomer to the social media landscape to retrieve and procure the user data about themselves that has been compiled and stored by those companies.

The wording of the bill calls for a "third-party custodial service" to facilitate the data exchange. It also permits charging a fee for performing such a service, though it's conceivable that a new social networking platform would be willing to pay such a fee in exchange for gaining new users.

Fertile ground for such a rule

It hasn't taken the world's dominant internet companies long to realize they can leverage their size and complexity to prevent rivals from mounting a major affront. There were no laws to prevent the application of such leverage, as the internet itself is still a relatively young (even if overwhelmingly important) means of transacting business and sharing information. Consumers have also been mostly unaware of how much digital data is being gathered about them and then used on them by advertisers and others willing to pay for access to the detailed information. Facebook's Cambridge Analytica scandal arguably brought both long-brewing problems to a head.

But unlike most such scandal-prodded movements, this one hasn't faded. It's continued to swell in popularity. Facebook CEO Mark Zuckerberg has now found himself answering questions about user privacy as part of a congressional hearing more than once, including this week. Alphabet, Twitter, and Amazon executives have also sat in the same hot seat.

In that same vein, consumers are largely on board with the regulatory scrutiny of so-called big tech. A survey performed by Trust Radius earlier this year found that only 29% of the respondents trusted Google. That's far better than Facebook's rating of a mere 5%. Apple and Amazon earned the trust of 27% and 25%, respectively. For perspective, the average level of consumer trust in companies observed by the study was a notably better 56%. More eye-opening is that more than 40% of respondents indicated they didn't trust any of the big four tech names.

The reason for the distrust? A separate study done by Dentsu found that roughly two-thirds of distrust in tech companies stemmed from misuse of personal data.

Sooner than later, competition is coming

Again, it's only a proposed bill at this time and far from becoming law. Similar privacy-minded and portability measures have been put on the table before and ultimately been rejected, most before they were ever put into bill form.

Those efforts weren't made in an environment like the current one though. The FTC and the DOJ and consumers and lawmakers appear to have had enough, even without knowing exactly what they've had enough of. Such legal and regulatory efforts don't appear to be going away.

Regardless of when it may finally take shape, it was Charlotte Slaiman -- policy counsel for digital-rights advocacy group Public Knowledge -- that arguably lays out the full extent of the threat to the likes of Facebook, Twitter, and others. She explains "It's really hard in today's environment for a company that would rely on this thing that doesn't exist yet to survive without it for a while. So I think that if we are able to have interoperability required, then innovators will know if you come up with a new start-up that is based on this system, you will have the opportunity for success."

It's that potential success of a newcomer prompting the present giants of social media to slow-walk and stall the ACCESS Act and other akin proposals. It's apt to come at their expense.