Please ensure Javascript is enabled for purposes of website accessibility
Log In Help Join The Motley Fool
Free Article Join Over 1 Million Premium Members And Get More In-Depth Stock Guidance and Research
By Jeremy Bowman - Oct 26, 2019 at 11:46AM

There's been no shortage of recession predictions lately.

Prognosticators of all stripes, from academics to bankers to analysts, have been calling for a recession, or at least pointing to an elevated risk of one, citing data like the inversion of the yield curve, slowing economic growth in China and elsewhere around the world, and a sluggish housing market. The Federal Reserve has even begun cutting interest to preempt a potential downturn.

However, after the latest round of earnings results from the country's biggest consumer companies, it's clear that these businesses aren't seeing anything remotely resembling a recession. In fact, many of these companies, including Procter & Gamble (PG -0.36%), Coca-Cola (KO 0.05%), and McDonald's (MCD -0.23%), are reporting some of their best growth in years. Let's take a closer look. 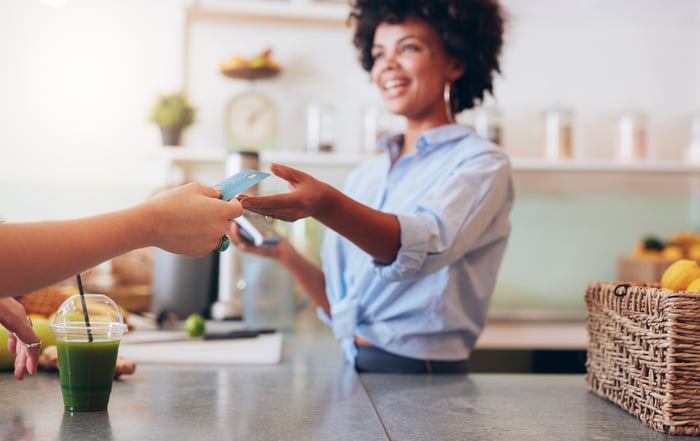 No problems at the drugstore

Procter & Gamble was a sluggish performer on the market for years, losing ground to more nimble start-ups like Dollar Shave Club and struggling to manage the dozens of brands its oversees. However, the stock has surged more than 70% over the last year and a half as the company's turnaround strategy, based selling on brands, cutting ad spending, and streamlining its organizational structure, pays off.

The latest quarterly results offers more proof. Organic sales, which strip out the effects of acquisitions, divestitures, and foreign currency, were up 7% on a 4% increase in organic volume, showing P&G has been able to pass along price increases while selling more product at the same time.

In its most recent quarter, management noted strong growth in North America in its Health Care division, and said U.S. sales growth was up 6%, an impressive figure for a mature company. CFO Jon Moeller dismissed a question on the earnings call about potential economic troubles, saying, "We have seen no signs of weakness."

Rival Kimberly Clark (KMB -0.54%), the maker of Kleenex and Huggies diapers, posted similarly strong results, saying organic sales were up 4% in consumer products in North America, and grew 5% in its professional segment.

Based on those companies' results, Americans show no signs of cutting back on household products.

Like P&G, Coca-Cola stock has also seen gains recently as a result of turnaround efforts. Becoming a "Total Beverage Company," Coke is giving customers more options in sizes and sugar levels, and is even launching a new Coca-Cola energy drink.

In the beverage giant's third-quarter earnings report, global organic sales rose 5%, and organic revenue was up 3% in North America, an improvement from earlier in the year. The company noted particular strength with Coca-Cola Zero Sugar in the U.S. market, which grew by double digits, and was also optimistic about the launch of Coca-Cola energy in its home market next year. Meanwhile, sales of mini cans grew 15% in the U.S.

Coke's performance in the U.S. is also noteworthy because soda sales have been falling since 2004 in the U.S. -- yet even in a challenging environment the company has found new beverages like water and tea to drive growth, as well as new versions of it trademark product.

Rival Pepsico (PEP 0.06%) was no slouch either in its latest quarter, reporting 4.3% organic revenue growth, with North America organic sales up 5.5% in the snack division and 3% in beverages, the company's two biggest categories.

Solid growth at both Pepsi and Coke in the U.S. shows that consumers are continuing to spend on name-brand food and beverages and absorbing price increases.

The arches are still golden

Finally, results at McDonald's (MCD -0.23%), the nation's biggest restaurant company, often have something to say about the U.S. consumer.  Shares of McDonald's have surged since CEO Steve Easterbrook took the helm in 2015, boosted by the launch of all-day breakfast, new menu items, restaurant remodels, and the introduction of delivery.

In the third quarter, that momentum continued as the company posted a global comparable sales increase of 5.9%, with U.S. same-store sales increasing 4.8%, a sign that the company's initiatives are resonating with American consumers and that they're still willing to spend.

On the recent earnings call, management noted that customer traffic was negative in the quarter, but higher spending from price increases and changes in product mix lifted comparable sales. Management cited the success of the fresh beef Quarter Pounder, delivery, and in-store ordering kiosks among other initiatives. U.S. operating margins expanded 280 basis points to 15.6% due to the comparable sales growth and operational efficiencies.

McDonald's isn't the only restaurant that's seeing sales boom. Chipotle Mexican Grill (CMG 0.08%) just reported 11% comparable sales growth, driven by digital ordering and delivery. The strong performance of these restaurant chains show that Americans have no qualms about paying for restaurant meals, which tend to be more expensive than cooking at home.

These signs that the American consumer continues to spend are especially important heading into the holiday season, as this time of year is the busiest in the retail industry. A number of retailers count on the holidays to drive the majority of their profits for the year, and some are even hoping a merry Christmas can stave off bankruptcy as the industry continues to shift to e-commerce.

Economic conditions can change fast, but the reality for now is that unemployment remains low and consumer spending is strong. The companies above represent more than $100 billion in annual U.S. sales. Their latest reports on the U.S. economy show that the boom isn't slowing down just yet.