Please ensure Javascript is enabled for purposes of website accessibility
Log In Help Join The Motley Fool
Free Article Join Over 1 Million Premium Members And Get More In-Depth Stock Guidance and Research
By Daniel Miller - Oct 28, 2019 at 8:09AM

When considering Ford's bull or bear thesis, many investors skip over this aspect of its business, and that's a mistake.

A handful of articles on The Motley Fool have been written about Ford Motor Company's (F -0.47%) overlooked entity, but many people remain unaware of it. What if I told you a entity of the company's business had nothing to do with manufacturing vehicles and is more profitable than any Ford auto region outside of North America? What if I told you it made more pre-tax profits than all of Ford's overseas markets -- by a long shot? What if I told you it can help fund Ford's growth opportunities, as well as part of its juicy dividend, which sits at a 6.5% yield?

If you don't know which entity I'm referring to, it's Ford Credit, and you're in for an enlightening article. If you knew it was Ford Credit, here's a look at its stellar third quarter and what it's doing differently from now on.

Just as Ford's bread-and-butter F-Series truck figuratively hauls the big bucks for the automaker, Ford Credit seemingly prints money. The latter is so important to Ford, as well as important for analysts to understand, that it has a separate conference call with its own presentation and plenty of potentially confusing numbers -- fun, right?

Before we try to explain some important numbers about the health of Ford Credit, let's take a look at a graph comparing the finance arm's pre-tax profit to that of Ford's automotive regions. 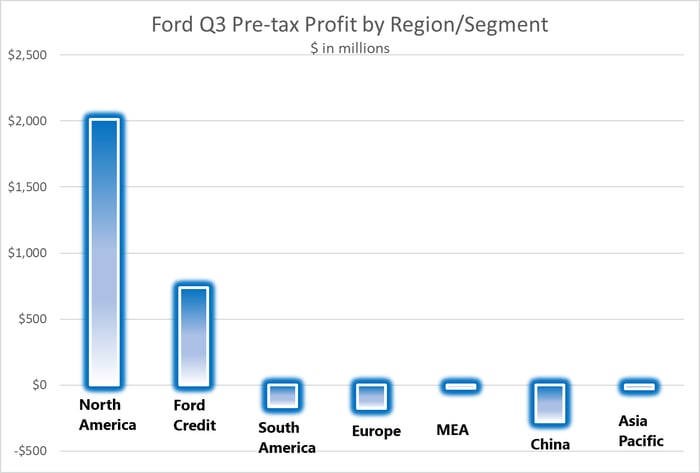 To save you the time and effort of trying to gauge whether Ford Credit was able to completely offset overseas losses, the answer is yes. Ford Credit generated $736 million in pre-tax profit during a stellar third quarter, while Ford's overseas markets combined to lose $683 million. I'm not cherry-picking a one-hit-wonder performance, either; here are the figures from full-year 2018: Ford's overseas markets combined to lose $2.19 billion in pre-tax profits, while Ford Credit cruised to a strong $2.63 billion pre-tax result.

The good news is that a bunch of potentially confusing ratios and numbers say Ford Credit remains very healthy as of the third quarter. Pre-tax earnings were up 9%, compared to the prior year, its loss-to-receivables (LTR) remained flat thanks to healthy U.S. consumer credit metrics, auction values per unit were better than expected, and delinquencies, repossessions, and high-risk lease mix all remain low. In other words, Ford Credit is lending and leasing to the right people and making a solid profit doing it, and when it takes returned vehicles to auction, it's getting more money than anticipated -- all great news.

Now that Ford Credit is the desired size, which is in the ballpark of $155 billion in managed receivables, instead of reinvesting in its business to grow its financing base, it can now increase the amount of distributions it sends back to Ford. During the third quarter, Ford Credit's distributions surged to $1.1 billion, up from the prior year's $678 million. If you're wondering how Ford could use the extra capital, here are two possibilities.

First, as the auto industry heads toward a world filled with self-driving cars and transportation-as-a-service options, Ford and its competitors will spend billions to keep up with technology development. Ford has even broken out a separate segment to be more transparent with its spending in Ford Smart Mobility and Autonomous vehicles, collectively referred to as Mobility. During the third quarter, as Ford prepared to launch Spin, an electric scooter start-up Ford purchased less than a year ago, in roughly 100 cities by the end of the year, and continued to pour investment into other driverless-technology and smart-mobility projects, Mobility registered a $290 million pre-tax loss. Funding mobility projects and developing driverless technology will be increasingly important for Ford's future. 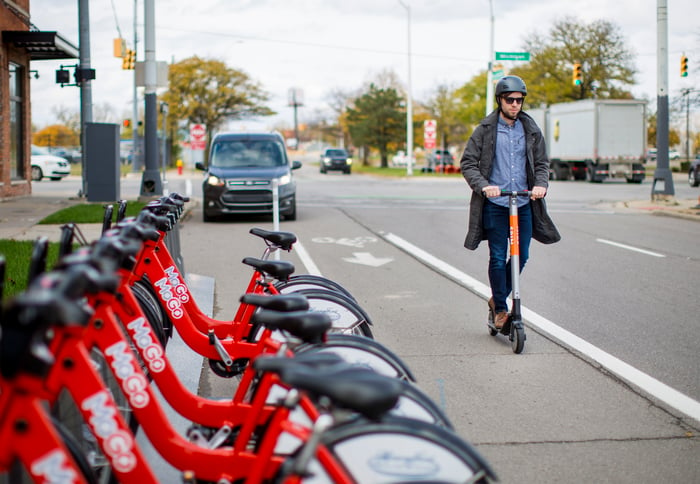 Second, as Ford embarks on a massive turnaround and portfolio refresh and its income from China has disappeared, some believed cutting or suspending the dividend was a good way to save cash. However, Ford has always maintained that its dividend would be sustainable through good times and bad. Former Ford CFO Bob Shanks told the Motley Fool that Ford Credit can send at least $1.6 billion annually to Ford, a figure that should easily grow, and that alone would pay for roughly 70% of the regular dividend.

When people discuss Ford and its prowess as a global automaker, Ford Credit is almost always skipped over and forgotten. Investing in car stocks isn't easy, but Ford Credit has always been a critical advantage for Detroit's second-largest automaker, and its strong third quarter was the latest reminder. At a time when Ford could use extra capital to help fund future Mobility projects, develop driverless vehicle technology, and reassure investors its dividend is safe, Ford Credit continues to thrive, even as an unsung hero.