Another set of earnings and another disappointment for investors in 3M (NYSE:MMM) -- and its management can, once again, be accused of being too optimistic with guidance. While the deteriorating economic environment obviously played a part, as it did with many industrial companies in the current earnings season, there are stock-specific questions to be answered here, too. And until there's evidence to suggest they are dealt with, in this author's view, 3M deserves to trade at a valuation discount to its peers. Let's look at another weak quarter for the company. 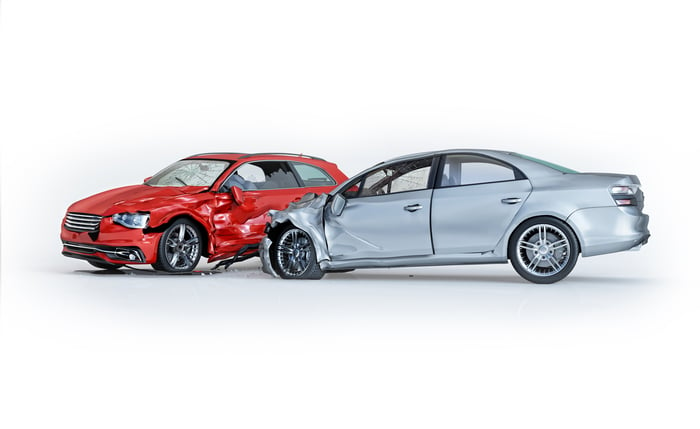 Another car crash of an earnings report from 3M. Image source: Getty Images.

The company's recent history of meeting its stated guidance can only be described as patchy at best. Management gave its guidance for full-year 2019 organic local currency growth of 2% to 4% during its outlook meeting presentation in November 2018, but it didn't look realistic even back then and as you can see below, management spent most of 2019 cutting that sales and earnings guidance.

Incidentally, management has decided not to hold its outlook meeting in November this year, so 2020 guidance will be given in January 2020 instead -- a sign that end-market conditions are creating volatility.

Data source: 3M presentations. *Includes a negative $0.15 from an acquisition.

Of course, 3M isn't the only company to cut guidance on the back of a weakening industrial economy, and it does have heavy exposure to the kind of short-cycle industries that tend to get hit first in a slowdown.

That said, there can be little excuse for the guidance CFO Nick Gangestad gave investors in the middle of September. At an investment conference, he said his view was that third-quarter organic sales growth will be "closer to flat" rather than the flat to low-single-digit growth he foresaw on the second-quarter earnings call in July. Fast-forward to the earnings release, and it came in at a negative 1.3%, an interesting development considering that Gangestad's "closer to flat" commentary came just a couple of weeks before the end of the quarter.

This isn't just an issue with investors feeling aggrieved at guidance numbers that eventually prove inaccurate. Management is presumably using its guidance to make operational decisions, and thus potentially burdening the company with excessive production costs as a consequence of overly optimistic guidance. This is a particular concern when end markets are turning down.

What happened in 3M's third quarter

It's not just that 3M is missing guidance, it's missing expectations and performing relatively badly in areas where it's supposed to be strong in 2019 -- namely in its healthcare and consumer segments. Investors like buying stocks with healthcare exposure  because they offer security in a slowdown.

Moreover, the company can't just blame it on sales in the Asia-Pacific region (down 4.4% in the quarter) because U.S organic growth also declined 1.1% in the quarter.

It's true that its two largest segments -- safety & industrial, and transportation & electronics -- do have heavy exposure to areas of the economy currently experiencing weakness. And it's understandable that management referenced a number of declining economic indicators on the earnings call.

But digging into the details reveals just how disappointing the third-quarter earnings results were. The chart below shows that the healthcare and consumer segments came up against a weak comparison in the third quarter of 2018 -- largely down to a pull-forward in sales in the second quarter of 2018 in advance of an enterprise software rollout.

In this context, the failure of the healthcare and consumer segments to grow significantly is not impressive. Note that management's midterm guidance (for the 2019-2023 period) is for healthcare to grow at an annual rate of 4% to 6% and consumer at 2% to 4%, so 2% and 2.6% in an easy quarter is a cause for concern. 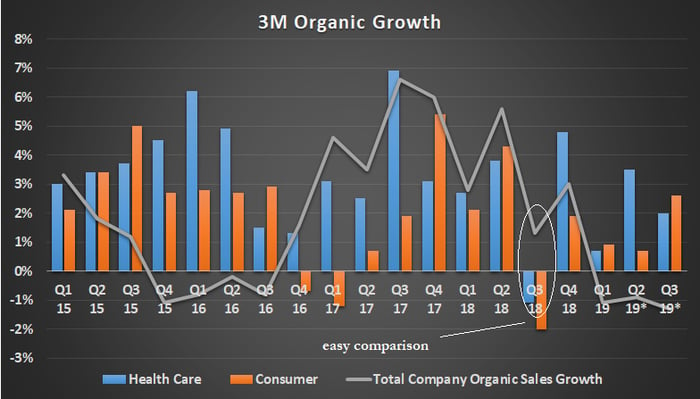 All told, 3M isn't growing its noncyclical businesses in line with its plans. And the other, larger segments are facing near-term cyclical risk. Throw in the issue of the erosion of credibility in management's guidance, and there's enough reason to be negative about the company. Don't be surprised if there's more turbulence ahead.

The stock's 3.5% yield will inevitably attract income investors, and it may well put a floor on the stock while management sets about restructuring the business. That's something to hope for, but 3M is going to have to demonstrate it can improve operational performance -- particularly in the healthcare and consumer segments -- before investors can feel confident holding the stock over the long term.