The widely played battle royale shooter Fortnite took the gaming world by storm in 2018. Accessories maker Logitech International (NASDAQ:LOGI) was a major beneficiary, with its gaming segment experiencing a sales increase of 32% in fiscal 2019 (which ended in March). At 23% of total revenue, gaming was Logitech's largest segment and one of its fastest-growing.

The company's fiscal second-quarter report released on Oct. 21, however, showed top-line growth decelerating to 6% year-over-year on a constant-currency basis. Gaming sales increased by only 2% year-over-year, which is way down from the robust 41% growth rate posted in the year-ago quarter.

Despite the negative trend in gaming sales, it's not as bad as it looks. In fact, management still sees strength in its gaming business. Here's why. 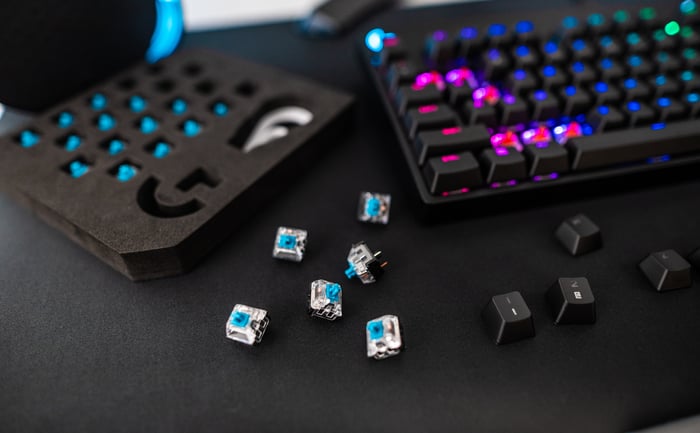 Gaming is a secular growth story

Logitech has had a lot on its plate through the first two quarters of fiscal 2020. The trade war has had an impact of tens of millions of dollars. Additionally, Fortnite is no longer attracting new players the way it did, and that has pressured sales of headsets.

But the focus on gaming's performance so far in fiscal 2020 doesn't give a bird's-eye view of the underlying trends in gaming. Keep in mind, the gaming segment was booming well before 125 million people decided to play Fortnite. In the quarter ending September 2015, Logitech's gaming segment reported $67.6 million in revenue for an increase of 17% year over year. In the most recent quarter ending in September, gaming revenue hit $161 million -- an increase of 138% in four years.

Another way to look at this is to forget about the year-over-year growth rate and consider gaming segment sales in the most recent quarter. Even though gaming grew just 2%, Logitech still sold roughly the same dollar value of gaming gear (keyboards, mice, and headsets) compared to the quarter a year ago, when Fortnite was bringing in a massive number of players wanting new headsets.

Although growth in the gaming segment last quarter was small, the segment is still strong. That's why CEO Bracken Darrell is optimistic about the gaming business heading into calendar 2020. He sees gaming returning to growth next year as the year-over-year comparisons get easier within the segment. During the earnings call with analysts, he said, "I'd expect the growth momentum in gaming to improve with more normalized compares as we exit this fiscal year."

Darrell is bullish on the long-term prospects of the gaming segment. He pointed to strong sales of premium new gaming products, such as the Pro X headset featuring Blue Voice technology, and the G815 wired and G915 lightspeed wireless gaming keyboards.

Also, management mentioned that excluding gaming headsets, which were the main driver of the explosive growth last year, sales increased at double-digit rates in the recent quarter. This continues the same trend from the fiscal first quarter and implies that demand remains high for gaming keyboards and mice.

How Logitech will handle tariffs

In its most recent quarterly report, Logitech confirmed previous full-year guidance of mid- to high-single-digit sales growth (excluding currency impacts) and non-GAAP operating income between $375 million and $385 million. This guidance doesn't reflect any potential impact from the tariffs going into effect in December.

However, management isn't too concerned about tariffs, because there are several levers they can pull to mitigate those costs. These efforts include pricing adjustments, shifting manufacturing out of China, and cost reductions. And Logitech has proven to be very good at these things.

In the last quarter, operating margin expanded by 70 basis points, allowing the company to reach a record level of operating profit, despite the impact of the trade war. Plus, sales growth of 6% adjusted for currency was on top of the highest price increases in more than a decade.

The stock is valued for growth, trading at a forward P/E of 17.8 times next year's earnings estimates. But investors seem content with the current state of the business, given the muted response in the stock price since the earnings news.

Logitech operates across several segments, but investors should watch the growth in video collaboration (video conferencing) and gaming closely. Heading into next year, those are the two segments that need to grow at healthy rates to justify the stock's current valuation.