Please ensure Javascript is enabled for purposes of website accessibility
Log In Help Join The Motley Fool
Free Article Join Over 1 Million Premium Members And Get More In-Depth Stock Guidance and Research
By Taylor Carmichael - Oct 29, 2019 at 9:00AM

An online startup is disrupting an industry with a cheaper and easier alternative.

Many companies provide YouTube videos where the founder or CEO discusses the business. What's surprising about SmileDirectClub (SDC 3.85%) is all the YouTube videos posted by its customers. People show off their new smiles and talk about the pros and cons of the service. One of these fan videos has been watched by more 700,000 people, pretty fantastic word-of-mouth advertising. Its value proposition is simple: SmileDirectClub will fix your smile. And it's a lot cheaper than going to the orthodontist.

One of the amazing things about SmileDirectClub is how large its market opportunity is. There are 124 million potential customers in the U.S. and half a billion worldwide. At the prices SmileDirectClub charges, that's a total addressable market (TAM) of $234 billion in the U.S. and more than $700 billion in the rest of the world, which puts its TAM at almost $1 trillion worldwide. 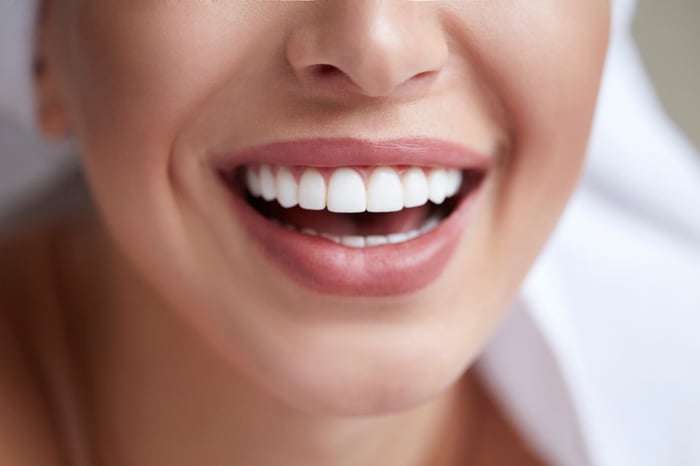 SmileDirectClub is disrupting the orthodontics industry by providing a generic version of the Invisalign teeth aligned that's direct to consumers. Many years ago, a company called Align Technology (ALGN 4.51%) developed a better way to deal with misaligned teeth than traditional metal braces that were grafted into your mouth. Align provided a clear aligner that does the same job and can be put in and removed at will. Orthodontists loved this product because it made their job a lot easier, and they could keep charging the same prices to their patients.

Now that Invisalign has come off-patent, the orthodontics industry is finding its entire business model disrupted. SmileDirectClub uses the same clear aligners, but it cuts out the orthodontist middleman by selling straight to customers. The company relies on teledentistry, which means a dentist looks at your teeth via the internet. At one of its hundreds of Smile Shops, the company takes a 3D image of your teeth. The aligners are made to order and shipped right to your home.

This makes the process a lot cheaper. SmileDirectClub charges $1,895 for its service, versus $5,000 to $8,000 for existing alternatives. And you can spread the payments out. You just make a down payment of $250 and monthly payments of $85.

The company is growing revenues at a blistering pace of 113%. SmileDirectClub had $586 million in sales over the past four quarters and will surpass $1 billion over the next four. And while SmileDirectClub is currently unprofitable, its profit margin is only negative 16%. Subtracting this negative profit margin from its triple-digit revenue growth, the company has a Rule of 40 score of 97. This is an outstanding business.

The orthodontists fight back

The Dental Board of California has been raiding the company's Smile Shops as part of an investigation. The American Association of Orthodontists is running its own video ads emphasizing the need for people to use a specialist for their teeth straightening needs.

It's a lost cause. SmileDirectClub has already improved the smiles of 750,000 people and is reaching more potential patients every day. NBA star Draymond Green was an early user and now he's an investor. "It's affordable, which is extremely important. There are so many people who don't have access to braces or other companies that are not as affordable to correct their teeth," he said.

SmileDirectClub has distribution deals with pharmacy chains CVS (CVS 1.38%) and Walgreens Boots Alliance (WBA 1.74%), where Smile Shops are established inside the drug store. So the tiny startup has some powerful partners.

For shareholders, owning SmileDirectClub's stock promises to be a bumpy ride. The stock is already being attacked by short sellers in the month following its IPO. The stock is down over 50% from its initial price of $23 a share. But for investors who can stomach a little volatility, this stock could prove to provide an outstanding return on your money.