Please ensure Javascript is enabled for purposes of website accessibility
Log In Help Join The Motley Fool
Free Article Join Over 1 Million Premium Members And Get More In-Depth Stock Guidance and Research
By David Butler - Oct 30, 2019 at 10:35AM

Ford (F 1.81%) faces too many challenges to be a buy right now. The carmaker reported third-quarter results this week, including earnings declines, lowered guidance, and less-than-promising sales trends overseas. Most of the turmoil seems to revolve around the company's attempt to restructure and move away from stagnant sedans. Nonetheless, it isn't doing much that will create a bull case for its stock. Here are the four key headwinds holding things back.

Ford announced last year that it would be implementing a massive $11 billion restructuring initiative that would shift the company toward trucks and SUVs. Overall, this year is expected to include $3.5 billion of those restructuring costs, meaning there's still more restructuring expenses down the road. As a result, net income declined 57% year over year to $423 million. On an adjusted basis that excludes special items, Ford had net income of $1.79 billion. Total revenues declined 1.8% to just under $37 billion. 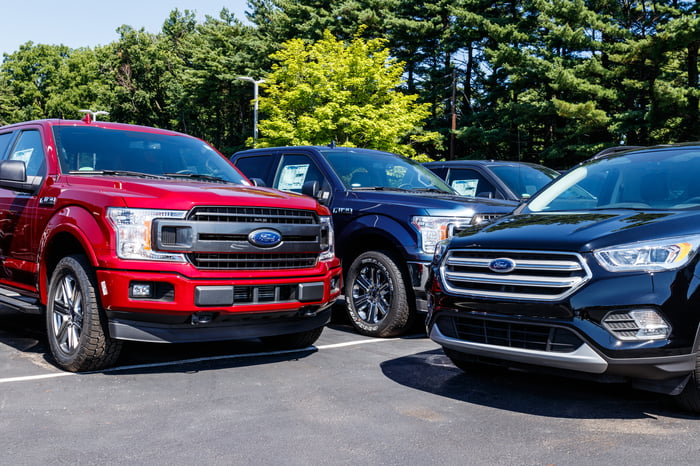 The poor performance probably won't be alleviated this year. Ford lowered its guidance and now expects adjusted earnings of $1.20 to $1.32 per share. The top end of this guidance would mark relative stagnation from 2018's earnings of $1.30 per share. For Ford, this doesn't necessarily mean much, as the stock is already valued so low. On an adjusted basis, the stock is trading at roughly 6.52 times forward full-year earnings. So unless things really hit a tailspin, downside is limited.

Ford's market share in China slipped 0.6% percentage points and revenue fell 27%. Investors have been hoping for China to be a growth market for car companies like Ford, and this weakening is a sign of softening potential. Credit the trade war if you wish, but what's clear is that China is not as promising right now as once hoped.

Obviously the company's shift away from sedans takes some of the credit for the declines, but crossovers that used to carry some sales weight are weakening. Ford Escape sales shrank 7.2% year over year, while the Ford Explorer fell 48%.

Ford is basically a truck company. Its only market that's doing well is North America, where the biggest market is the United States and the vehicles growing within Ford's U.S. lineup are pickup trucks and big SUVs. United States truck sales increased 8.8% in the third quarter. Lincoln SUVs grew 19.2%, and the Ford Expedition remains strong. Some have pointed to the potential of the revamped Ford Explorer, but there have been production delays. In all, Ford is heavily reliant on American sales of trucks.

Another potential headache on the horizon is the UAW. Currently embroiled with General Motors (GM 1.90%), the UAW will likely turn to Ford next. Whether this will lead to the same embroiled battles over wages and production remains to be seen, but if talks do happen and some sort of long-term debate were to arise, it would come at a time when Ford does not need to lose any more money.

While sales of Ford's F-series pickups have been strong for years, the auto industry is inherently cyclical, and eventually we're going to see a slowdown. It will likely precipitate the next U.S. recession. Auto sales are one of the key indicators of strength in consumer spending.   When that recessions hit, automakers never fare very well. We're already seeing weakness in overall auto sales, so it is only a matter of time.

Auto stocks already trade at relatively low multiples, so Ford shares certainly won't be getting rewarded for anything other than meaningful earnings growth. With that in mind, it doesn't make sense for investors to be diving into auto shares at this time. The only exception to this rule is if you believe in the long term sustainability of the dividend yields.