T-Mobile (NASDAQ:TMUS) posted yet another quarter of industry-leading subscriber net additions. Its 754,000 new postpaid phone subscribers from the prior quarter was more than double Verizon (NYSE:VZ) (239,000) and AT&T (NYSE:T) (101,000) combined.

A key part of that net subscriber growth was T-Mobile's ability to hold onto more customers. Postpaid phone churn came in at a third-quarter record 0.89%. That's better than AT&T (0.95%) and closing in on Verizon (0.79%).

"We have to be aware [that] we are arriving at industry best," President and COO Mike Sievert said when asked about further room for improvement in subscriber retention. As T-Mobile pushes up against the limitations of subscriber retention, the number of net subscriber additions could go down if T-Mobile can't improve its gross additions analyst Walter Piecyk suggested during the company's third-quarter earnings call. That's the challenge Verizon and AT&T face right now. 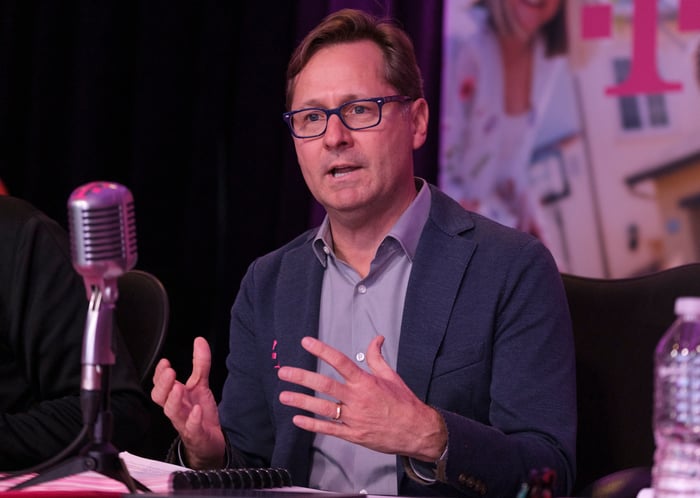 The state of the industry

Sievert pointed out that the entire wireless industry has experienced very low churn rates over the last few years as customers hold onto their phones longer and longer. But even AT&T and Verizon saw their churn rates climb last quarter.

Part of the equation for marginally higher churn at AT&T and Verizon is an increased level of competition from cable MVNOs entering the market and expanding their wireless offerings. Verizon still benefits from those subscribers because it wholesales its network capacity to support the cable MVNOs.

The competition will potentially increase next year with the introduction of Dish Network as a fourth wireless carrier to take on New T-Mobile, AT&T, and Verizon. T-Mobile will see similar economics from the new competitor as Verizon sees today with the cable companies. As such, T-Mobile may struggle to keep improving its churn rate next year, just as Verizon and AT&T struggled this year.

The introduction of 5G could create more switching

Sievert also pointed out that as carriers roll out their 5G networks and subscribers buy 5G handsets, the industry could see elevated churn as consumers evaluate wireless service providers based on their next-generation networks. T-Mobile believes it has some advantages in the race to 5G, especially after its merger with Sprint goes through and it can deploy Sprint's excess spectrum capacity.

Sievert says if industrywide churn increases, T-Mobile should be able to win more gross subscriber additions than the competition. It's done so in the past, as evidenced by its accounting for 48% of net additions in the industry last quarter. That said, it seems like gross additions at T-Mobile have declined this year while it's doing a better job holding onto customers. It's not clear if the equation will work the other way around for T-Mobile, especially with the new competition in the market compared to just a couple of years ago.

T-Mobile may have to invest more in marketing and promotions if churn ticks up. It certainly has the capability to do so since it's now producing significant free cash flow, and the merger with Sprint could boost cash flow even more once fully integrated. That said, it could see a bigger impact on operating profit compared to the last couple years of improving the subscriber retention side of the equation.

T-Mobile just posted net income higher than analysts expected on lower-than-expected revenue. If it has to rely more on gross additions going forward, that top-line growth should be much more important to investors.