The most recent earnings report released by hospitality-franchisor Wyndham Hotels and Resorts (NYSE:WH) is quite a bit stronger than it first appears on a cursory glance. The company issued third-quarter 2019 results on Tuesday and exhibited progress on several fronts, despite a drop in revenue per unit.

As we unpack the outcomes of the last three months, note that all comparable numbers refer to those of the prior-year quarter. 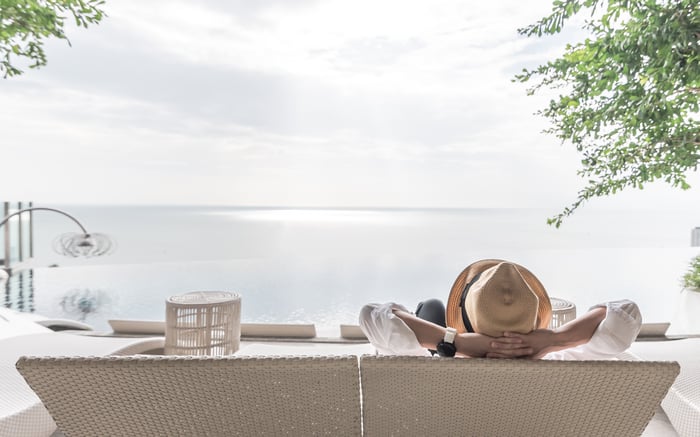 Wyndham is currently engaged in a multiyear effort to refresh its brands and properties. The franchisor is gradually elevating its overall brand perception via fresh investment in its economy and mid-scale segments. During the company's earnings conference call, CEO Geoff Ballotti discussed brand enhancements introduced at the company's recent global hotelier conference in Las Vegas:

In the upper mid-scale segment, we introduced Arbor, a new interior and exterior prototype to our rapidly expanding Wyndham Garden brand, offering a modern look that creates a natural serenity experience for guests at a reduced cost per key [i.e. room] for developers. The addition of Arbor, coupled with La Quinta's award-winning Del Sol prototype, gives developers two new low-cost and high-return upper-mid-scale development options. And for the extended stay segment, Hawthorn Suites' new dual-branded prototype with La Quinta attached continues to attract significant attention from interested franchisees... Overall, our conference proved to be a tremendous success for our franchise sales teams for whom it was a great opportunity, not only to sign incremental contracts, but also to generate new development leads.

Wyndham provided investors with a mixed bag of earnings-related tweaks in advance of the final quarter of 2019. The company lowered its full-year global RevPAR growth outlook from 1% to a range of negative 1% to 0%, reflecting the third-quarter's RevPAR weakness. Management also shaved the top end of Wyndham's 2019 revenue target, replacing a band of $2.05 million-$2.08 million with a new expectation of $2.05 million-$2.06 million.

On the earnings front, adjusted net income is now slated to fall between $311 million and $318 million, an increase from the previous mark of $308 million-$315 million. Similarly, management anticipates that adjusted earnings per share (EPS) will hit a range of $3.21-$3.28 versus the previous envelope of $3.16-$3.23. This marks the second consecutive quarter of higher full-year EPS estimates.

Investors in this consumer discretionary stock have generally rewarded its improving earnings outlook: Shares have appreciated 17% year to date.