Please ensure Javascript is enabled for purposes of website accessibility
Log In Help Join The Motley Fool
Free Article Join Over 1 Million Premium Members And Get More In-Depth Stock Guidance and Research
By Keith Speights - Updated Oct 31, 2019 at 7:58AM

Which stock wins in a head-to-head battle between these two medical device makers?

Intuitive Surgical has been by far the bigger winner so far in 2019. But past performance isn't really a top factor to consider when evaluating stocks. What's most important is the growth opportunity for each stock. With that in mind, here's how Intuitive Surgical and Accuray stack up against each other. 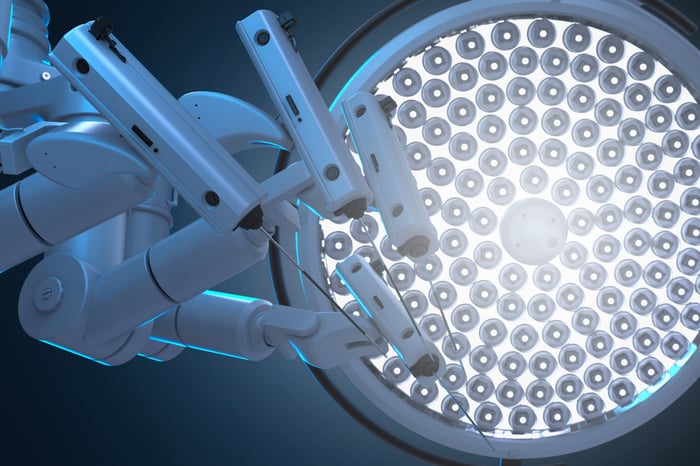 Probably the best place to start with why you might want to consider buying Intuitive Surgical is the company's latest quarterly results. Granted, one quarter isn't enough to evaluate a company, but Intuitive's Q3 results underscore what has been an ongoing pattern for the robotic surgical systems maker.

More surgical procedures than ever before are being performed using Intuitive's da Vinci robotic surgical system. The company reported 20% year-over-year procedure growth in the third quarter -- tied for the highest growth rate in the past six years. What's especially encouraging is that this growth is spread across multiple types of procedures.

This procedure growth contributed to Intuitive Surgical's strong year-over-year revenue growth of 23%. Roughly 72% of the company's revenue stems from recurring sources, particularly replacement instruments and accessories. A growing component of that recurring revenue, though, is operating leases where customers lease rather than buy new systems. Although these leases eat into Intuitive's upfront revenue, they increase the company's revenue stream over the long run. Investors should like that trade-off.

Along the way, Intuitive has become a bona fide cash cow. It wrapped up the third quarter with a whopping $5.4 billion cash stockpile. Around $282 million of that total was added in Q3 alone, thanks to strong operating cash flow.

Intuitive Surgical doesn't skimp on research, investing around 12% of total revenue into research and development. The company has recently rolled out new products including the Ion robotic-assisted system for navigating lung airways and new instruments for the da Vinci system such as the SureForm 45 curved-fit stapler that are ideal for thoracic surgeries.

There's more competition on the way. Medtronic will soon launch a system to compete directly against da Vinci. However, this competition could counterintuitively be good news for Intuitive Surgical by expanding the overall robotic surgical systems market. With Intuitive's huge head start in the market, it should be able to more than hold its own as other companies eye the lucrative market opportunity.

However, Accuray could be a diamond in the rough. The company reported its highest quarterly revenue in its history in the fiscal 2019 fourth quarter, which ended on June 30. Accuray's revenue was boosted by relatively strong product sales.

Accuray should have a solid growth opportunity in China. The company has high hopes that its joint venture with China Isotope & Radiation Corporation will set the stage for greater sales in the country.

Innovative new products could also fuel long-term growth. Accuray especially thinks that its Synchrony motion compensation technology for its Radixact radiation therapy system could be a big winner. In August, the company announced that its first customer evaluation site for this new technology was in process.

Accuray also introduced an important software upgrade for the CyberKnife radiation therapy system last fall. The company's VOLO optimizer software reduces treatment times for CyberKnife by up to 50% and can cut treatment planning times by as much as 90%. Accuray CEO Josh Levine said in the company's Q4 call that this upgrade could "be both the catalyst to our installed base replacement cycle and allow us to attract new customers to the CyberKnife platform."

The main key for Accuray to reward investors in a significant way is for the company to achieve profitability. Accuray delivered an operating profit in fiscal 2019, although it still had a negative bottom line. If the company's new products and joint venture in China pay off, Accuray could arguably have plenty of room to run.

While Accuray could turn the corner in the future, my view is that the clear winner between these two stocks is Intuitive Surgical. In fact, I think that Intuitive Surgical ranks as one of the most attractive healthcare stocks on the market right now.

Intuitive Surgical boasts a strong financial position, a commanding market share, and a fast-growing market. Add a highly capable management team to that list, too. All of these factors make Intuitive Surgical a great pick for long-term investors.