Fiat Chrysler Automobiles (NYSE:FCAU) said that its third-quarter adjusted operating profit rose 5% from a year ago, to 1.96 billion euros ($2.17 billion), as strong pricing drove a record result in North America despite a decline in overall shipments.

That adjusted operating profit, which excludes a series of one-time noncash impairment charges, was enough to beat the consensus Wall Street estimate of 1.89 billion euros as reported by Reuters.

FCA also confirmed its prior upbeat full-year guidance for 2019 -- and gave preliminary guidance for 2020, along with some new details about its ongoing restructuring efforts. But management had little to say about FCA's plan to merge with French automaker Peugeot (OTC:PUGOY), as the deal is not yet finalized. 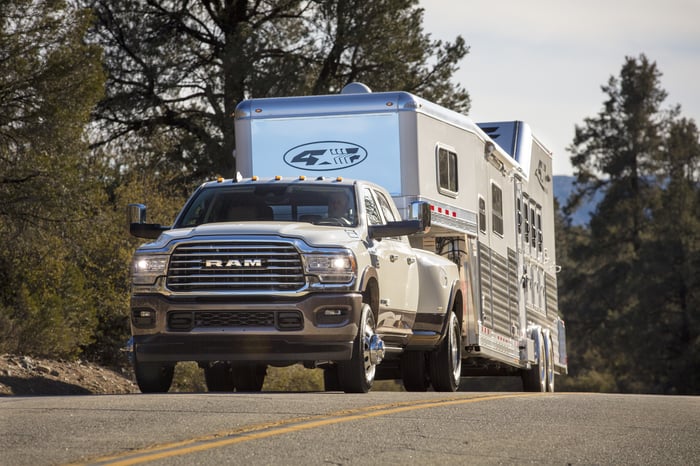 What happened with Fiat Chrysler Automobiles in the third quarter?

All profit and loss figures in this section are reported on an adjusted-EBIT basis.

About those one-time items

FCA took one-time charges totaling just over 1.4 billion euros in the quarter. Much of that consisted of noncash impairment charges related to a revamp of its future-product plans for the Alfa Romeo and Maserati brands, including the need to overhaul a key platform to accommodate battery-electric drivetrains.

During FCA's earnings call, CEO Mike Manley said that all new Maseratis after 2020 will be offered in both internal-combustion and battery-electric versions and confirmed that the brand has several new products in the pipeline. But Alfa Romeo has trimmed its future-product plan because of weak sales: The existing Giulia sedan and Stelvio SUV will be joined by two more SUVs by 2022, but plans for other sedans and sports cars have been shelved.

Manley also said that in a bid to boost margins in Europe, the Fiat brand will refocus on "B-segment" (subcompact) vehicles rather than the tiny (and low-margin) "A-segment" models that have made up its core offerings in Europe in recent years.

Looking ahead: New guidance for 2020

FCA confirmed its prior guidance for 2019 and gave new guidance for 2020 that reflects an expected increase in capital spending and ongoing efforts to reduce dealer inventories in Europe.