Expectations were low going into Mattel's (NASDAQ:MAT) third-quarter financial report. The combination of its ongoing turnaround and a tough retail environment due to the trade war with China had Wall Street looking for flat year-over-year revenue and small profitability improvements as the company's restructuring plan began to yield results.

What investors got was far better than they bargained for, sending the stock soaring 13% the day after its report. Let's see what has shareholders so giddy and what it means for the Barbie maker's future. 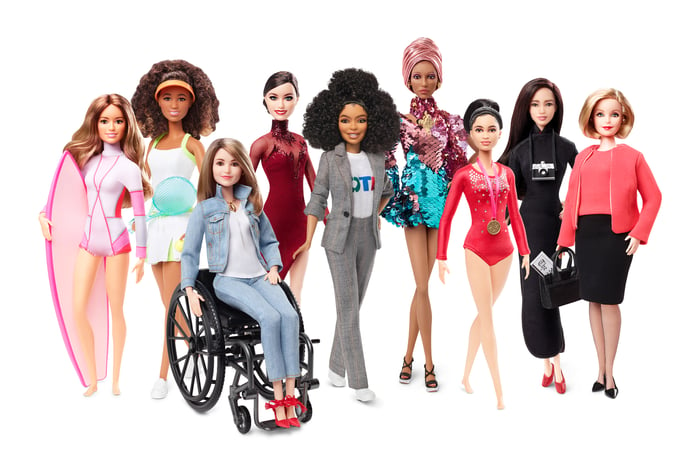 Strong results in a tough environment

For the third quarter, Mattel reported net sales of $1.48 billion, up nearly 3% year over year, or 4% in constant currency, which easily exceeded analysts' consensus estimates of $1.43 billion. The surprise carried down to the bottom line, generating net income of $70.6 million, up more than 11-fold from the $6.3 million in the prior-year quarter. This resulted in earnings per share of $0.20, up 900% year over year and sailing past expectations of $0.16.

The results were all the more surprising because Mattel's growth rate was even more robust than that of competitor Hasbro (NASDAQ:HAS), which reported last week that net sales were flat year over year, blaming the shortfall on the uncertainty related to tariffs. Even more striking, Mattel said it didn't experience any order cancellations as the result of the shifting dates to implement additional tariffs for the toy industry.

Net sales in North America were essentially flat year over year for Mattel, but the international segment took up the slack, with sales climbing 10% compared to the prior-year quarter. The growth was driven by Barbie, Polly Pocket, and Hot Wheels. Another key contributor was the launch of dolls fashioned after South Korean boy band BTS (aka Bangtan Sonyeondan, or "Beyond the Scene"), which has become a worldwide pop sensation.

Not all the news was good. The infant, toddler, and preschool category sank 11%, or 10% in constant currency, with weakness in Fisher-Price and Thomas & Friends.

Mattel has turned lowering its expenses into an art form over the past year. The company expected to achieve a run rate of $650 million in savings to close out 2019, but Mattel has been digging deep and has achieved $826 million in cost savings. Mattel now expects the rate to top $854 million by year-end.

In early August, Mattel revealed in a regulatory filing that it had become aware of an anonymous whistle-blower letter. At the time, the company didn't share any details regarding the allegations. In a press release today, Mattel said the letter was sent to its outside auditors alleging accounting errors and questioning whether the auditor was, in fact, independent. The company hired outside parties to helm the investigation, which determined that a tax expense had been recorded in the wrong quarter in 2017, though it had no effect on the company's full-year results. Mattel disclosed "material weaknesses in its internal control over financial reporting," which led to the error.

In a separate if somewhat related press release, Mattel announced a CFO transition plan, saying it would replace current CFO Joseph Euteneuer after a transition period of up to six months.

The biggest test is yet to come

The quarter was a much-needed win for Mattel, and with Halloween just days away, the holiday season is about to begin in earnest. If the toymaker can pull off another better-than-expected quarter, it can perhaps shake the doldrums that have plagued the stock for nearly three years.

For the upcoming fourth quarter, analysts' consensus estimates are calling for revenue of $1.5 billion and earnings per share of $0.09. Mattel is only providing broad strokes in terms of its forecast, but on the conference call, Euteneuer said the company now expects full-year gross sales in constant currency to be up slightly year over year. Mattel now expects to deliver adjusted EBITDA in the range of $400 million to $425 million.