Please ensure Javascript is enabled for purposes of website accessibility
Log In Help Join The Motley Fool
Free Article Join Over 1 Million Premium Members And Get More In-Depth Stock Guidance and Research
By Rich Duprey - Oct 31, 2019 at 11:10AM

The toolmaker beat bottom line estimates, but there will still be headwinds in the quarters ahead.

Stanley Black & Decker (SWK -1.00%) went right to work in the third quarter beating back the headwinds that have caused so much volatility for most of 2019. It also beat Wall Street's earnings estimates, though sales just missed forecasts.

Yet as the toolmaker looks to the future and reining in most costs from its business, it lowered its guidance for the rest of the year, believing its cost-cutting program will sap the earnings strength it has exhibited. With the reduced guidance, the market dropped Stanley's stock almost 5% on the news, though it gained it right back the next day. 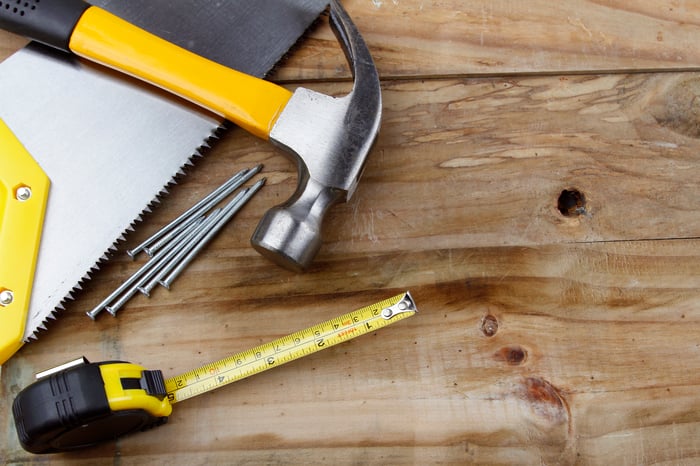 The owner of such well-known brands such as Craftsman, DeWalt, Irwin, and Lenox reported revenue rose 4% to $3.6 billion, just under the $3.65 billion analysts were looking for, as sales in its tools and storage category -- Stanley's largest segment accounting for 70% of total sales -- rose 4%, mostly on higher volumes. Raising prices only contributed 1 percentage point of gains to the increase, which was offset by a similar currency exchange headwind.

While Stanley's industrial segment saw sales surge 13%, that was solely due to the acquisition last year of IES Attachments for $690 million. The company makes a variety of coupler tools to attach heavy equipment  for off-highway construction applications, and it added 16% to segment revenue, but sales volume actually fell 2%, and negative currency forces took another percentage point away.

It also saw organic revenues fall in its engineered fastening business due to the continued softness in both automotive and industrial markets, though that was offset by higher organic growth in oil and gas.

But slowdowns are happening elsewhere

While it was able to gain 2% from price hikes in its security segment, that was more than offset by the divestiture of its padlock and locking mechanism business, Sargent & Greenleaf, and declines in volume.

That led Stanley Black & Decker to lower its full-year adjusted earnings outlook to a range of $8.35 to $8.45 per share from $8.50 to $8.70 per share. As emerging markets and its industrial business slow more than management expected, it sees the need to reduce its forecast. Also figured in were slightly slower organic growth, down to 3.5% to 4% from 4% previously, and currency and tariff headwinds.

To counteract them, Stanley is adjusting its cost basis by implementing a reduction program that will save $200 million, mainly through firing employees and "footprint rationalization opportunities," or shutting down facilities such as the Georgetown, Ohio manufacturing plant it announced it was closing this past summer. The jobs are being transferred to its Allentown, Penn. plant.

A firm footing for investors

Stanley remains a solid business, investing its money in meaningful acquisitions such as IES last year and the Craftsman tool brand, as well as the Irwin and Lenox brands from Newell Brands, in 2017. President and CEO James Loree says Stanley will generate a cumulative $100 million to $150 million in revenue synergies by next year.

The toolmaker has also rewarded shareholders through dividend payments, which it has paid for over 140 consecutive years. It has also hiked the payout for 52 straight years.

Trading at 16 times next year's earnings estimates and less than twice its sales, Stanley Black & Decker doesn't seem especially highly priced, but currency and trade uncertainty may cause the volatility investors have witnessed this year to continue for some time to come.