The French video game maker Ubisoft Entertainment (OTC:UBSF.Y) has a history of rushing games into release even while they're still a little buggy.  The company is always responsive to complaints from its audience, and is quick to do upgrades and fixes. But historically for Ubisoft, the initial release of one of its games is not nearly as popular as updated versions.

Apparently this reputation has caught up with it, because the premiere of its new Tom Clancy shooter, Ghost Recon Breakpoint, has been both a critical and commercial flop. 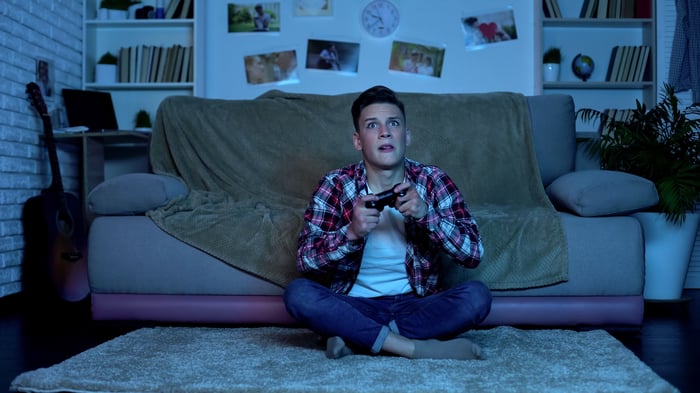 While this is certainly bad news for Ubisoft in the short term, the company is using it as an opportunity to give itself more time to perfect its future offerings. It has announced it is delaying the release of three major titles (Rainbow Six Quarantine, Gods & Monsters, and Watch Dogs: Legion) until the second half of 2020. That's pushing all three titles out of the current fiscal year, which ends June 2020.

The stock took a major hit on the news. Ubisoft had to drastically cut its sales projections for its current fiscal year: Revenue estimates were slashed by a third, and profit estimates were hit by almost 90%. Trading in the stock was briefly halted on the Paris exchange when the news broke. After it resumed, Ubisoft lost about 16% of its valuation; over $1 billion in market cap disappeared.

So far, 2019 has been very disappointing -- shares of its American depositary receipts are down about 27% this year. And that's after the shares bounced back Monday, running up 11% on no news. Is this a dead cat bounce or a buying opportunity?

One step back, two steps forward

Buried in the bad news of its press release is a big upside: Ubisoft is actually raising its guidance for fiscal 2021. This isn't much of a surprise, since the company is now adding three major game introductions into that time frame. Management is forecasting revenue to grow by approximately 80% next fiscal year, and profits will jump at least 1,100% from this year's estimates.

Nor is Ubisoft being unduly optimistic. Consider what the company pulled off in 2017. Its previous Ghost Recon title, Wildlands, was the No. 1 game for most of the year, up until the Christmas season. And its For Honor was the No. 2 game during that same stretch. The company's Rainbow Six and Assassin's Creed have been huge best-sellers. And people are still excited about its upcoming Beyond Good and Evil 2 release, not to mention the company's future version of Avatar.

Yet the future looks positively bright. Consider that Ubisoft has just recently rolled out Uplay, its subscription service. For $15 a month, players can subscribe to the company's library of over 100 titles. There are four different games based on the Prince of Persia franchise, 24 Tom Clancy games (the Splinter Cell franchise, the various Rainbow Six games, and the Ghost Recon titles), as well as six Assassin's Creed games, and a half-dozen Far Cry games. And its Just Dance franchise is so popular, it has its very own streaming service (at $4.99 for all the dancing titles). Ubisoft dominates the dancing video category and is now introducing a new title every year.

Investors should also consider that the largest video game company in the world, Tencent (OTC:TCEHY), now owns 5% of Ubisoft's shares.  It has signed a distribution deal with Ubisoft to start offering its games in the largest market in the world, China. While this deal is still in its early stages, it's not hard to believe that this relationship will pay off big. Activision has a similar deal with Tencent and now receives hundreds of millions of dollars in revenue from China.  And while there might be a few public relations headaches when you try to operate in a dictatorship, Ubisoft (a French company) doesn't have to worry too much about any trade war between the U.S. and China.

At today's prices, Ubisoft could be a bargain. The share price is about half off its all-time highs, but it has three exciting catalysts on the horizon as new titles are finally released in 2020, the Uplay service gains traction, and the China market opens up. The next few years could be a lot better for Ubisoft.

Is It Time to Buy Ubisoft? @themotleyfool #stocks $UBSF.Y $TCEHY Next Article
Current