Please ensure Javascript is enabled for purposes of website accessibility
Log In Help Join The Motley Fool
Free Article Join Over 1 Million Premium Members And Get More In-Depth Stock Guidance and Research
By Billy Duberstein - Nov 1, 2019 at 8:45AM

The Mi Mix Alpha is “covered in screen” and retails for nearly $3,000.

You might have been impressed with this year's Apple (AAPL 0.00%) iPhone 11 Pro Max, which features three cameras, including a neat telephoto lens, and costs $1,100 and up, depending on your storage option. Or maybe you are wowed by the Samsung (OTC: SSNLF) Galaxy Fold, the first phone with a fold-out screen to hit the market, which currently goes for nearly $2,000.

But if you like these fancy phones, you ain't seen nothing yet, says Chinese phone maker Xiaomi (XIACF 12.82%). Get ready for the Mi Mix Alpha -- its features are even more audacious, and it carries an even heftier price tag. 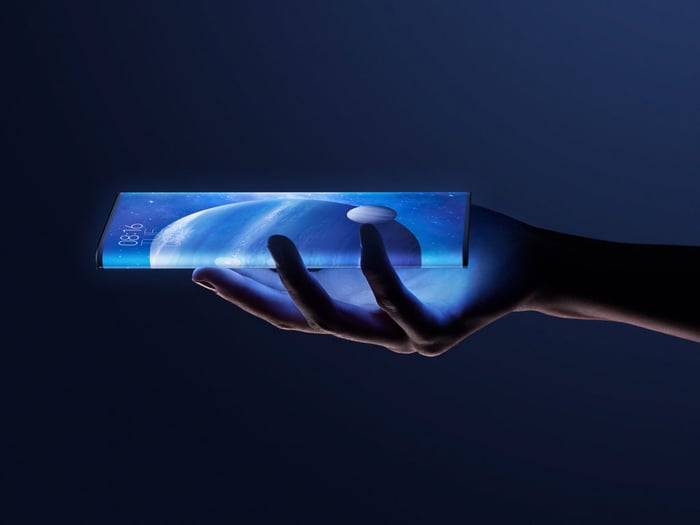 A phone that's almost all screen

There are lots of interesting features in the Mi Mix Alpha. It has a Qualcomm 855+ CPU -- the same as the Galaxy S10. It has a whopping 512 GB of storage and 12 GB of RAM, triple the amount in the iPhone 11 Pro Max and 4 GB more than the Galaxy S10, which has 8 GB, though it's even with the 12-GB Galaxy Fold. And of course, like any leading smartphone released this year (except Apple), the Mi Mix Alpha supports 5G.

However, the Mi Mix Alpha's main calling-card feature is that it's almost entirely covered in high-definition QHD "2K" screen. That's right -- the screen takes up almost the entire phone, including the back, with just a small strip to house the phone's 108MP camera -- an ultra-high-definition camera feature co-developed with Samsung, which sports the highest pixel count and biggest chip of any smartphone camera to date.

With a phone entirely made of screen, users have to adjust to some new habits. For instance, the volume buttons are now gone. Instead, there are software-enabled touch buttons on the side of the phone where they would normally be. In addition, the screen on every side means that in order to take a selfie, you just need to flip the camera around, and you'll still be able to see what the viewfinder sees on the "back" of the camera. There's no front-facing camera to "flip" to. 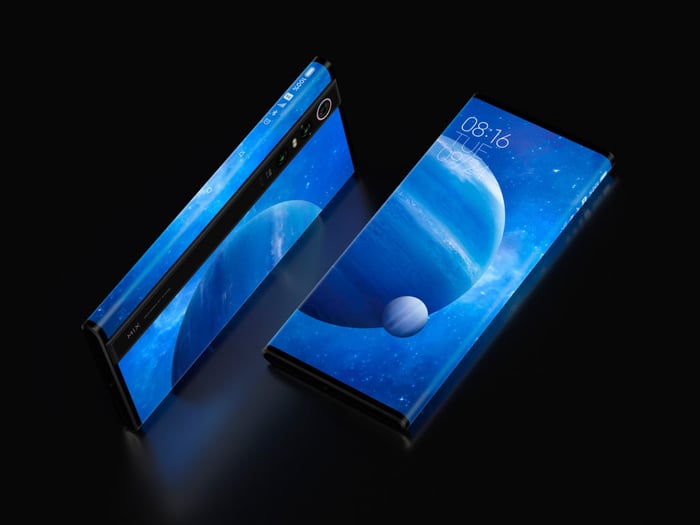 Though the Mi Max Alpha made waves when its specs hit the news wires in September, the phone likely won't be mass produced, as it's still just a concept phone. That's likely because it has battery life challenges, as one might expect from such a feature-packed phone, and it will cost about $2,800 when it's released in December, far more than even the most high-end Apple or Samsung model.

So why would Xiaomi embark on this quest for a phone with limited appeal? Likely to boost the Xiaomi brand. Xiaomi just went public last year, and it has long had the reputation of being a low-cost provider. However, the company is now fiercely competing for higher-end models as well. In fact, Xiaomi split off a second brand, Redmi, just to focus on lower-end price-performance phones, while the remaining Xiaomi brand will now push higher on the mid- to high-end customer segment in an attempt to make the Xiaomi brand synonymous with next-generation innovation.

Xiaomi's shifting strategy comes at a time when its core phone segment is slowing down dramatically. Last quarter, Xiaomi's phone segment only grew 5%, a huge deceleration from the 58.7% growth in the year-ago quarter. Of course, Xiaomi isn't alone -- the global smartphone market is shrinking as phones last longer and consumers wait for 5G phones. A ridiculous $2,800 concept phone with features not yet contemplated by the other global phone giants is certainly a way to promote Xiaomi's commitment to innovation in a crowded smartphone field.

Speaking of 5G, due to the positive customer response to its recent 5G releases, Xiaomi just announced it would be releasing 10 5G phone models in 2020. That is, likely, more than just about any other global phone maker and is a testament to Xiaomi's devotion to customer satisfaction and innovation. Therefore, the Mi Max Alpha could be an audacious way to spread the word about Xiaomi's innovation chops ahead of the broader 5G phone releases next year.

Look out for Xiaomi

The out-there Mi Mix Alpha concept phone might not lure in many customers with its "a bit much" features and sky-high price tag; however, let's not dismiss the effort outright. In response to slowing growth, Xiaomi isn't accepting the status quo but rather is stepping on the gas.

The Alpha and the audacious 10-phone 5G 2020 lineup show that Xiaomi will continue to be a fierce competitor and innovator that's not afraid to push new boundaries. In addition, its push upward into higher-end phones should have global leaders Samsung, Apple, and domestic rival Huawei looking over their collective shoulders. Technology transitions such as 5G provide opportunities for new companies to leapfrog previous leaders, so tech investors and customers should keep an eye on the 5G race to see which emerging company assumes the new 5G throne.

A Foolish Take: Apple Loses the Wearables Crown to a Chinese Challenger