PayPal Holdings (NASDAQ:PYPL) continues to kill it in the war on cash. In its third-quarter earnings report, the digital-payment provider reported that 10 million new users joined its platform, contributing to a 25% increase in total payment volume.

The war on cash is really a fight among digital-payment providers to become the default payment option for everyday purchases. PayPal's most powerful weapon in this ongoing battle is Venmo. The peer-to-peer (P2P) payment app is growing much faster than the rest of PayPal's business. Here are three charts that highlight Venmo's momentum. 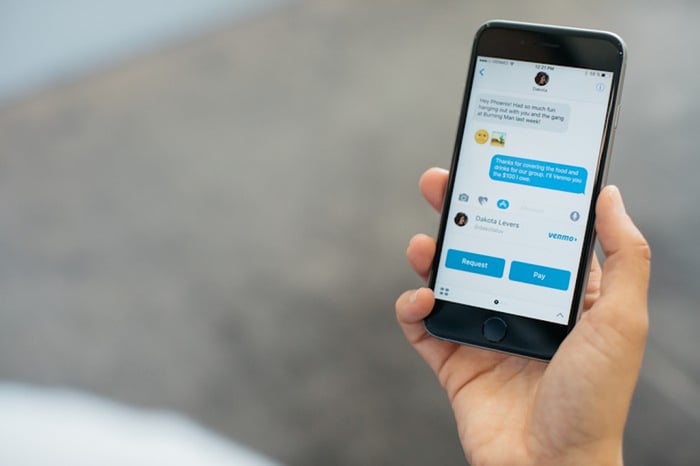 Venmo's total payment volume (TPV) reached $27.5 billion in the last quarter, up 64% year over year. It made up 15% of companywide payment volume in the third quarter.

PayPal doesn't update the user base of Venmo every quarter. The last time management provided a specific number was during the first-quarter conference call, at which time Venmo had 40 million active users. However, that number is likely much higher now, given the growth of the service in recent quarters.

PayPal saw its total user base across its ecosystem of services increase by 16% year over year, to 295 million last quarter. The growth of P2P payment volume is becoming a greater slice of PayPal's economic pie. Specifically, P2P volume grew 39% year over year in the last quarter and is nearly a third of PayPal's total volume.

Venmo is mostly free to use, so it hasn't generated much revenue, but that's quickly changing. Management has been updating investors on Venmo's revenue contribution lately as the company begins to add features to the app that charge users a small fee.

In the third quarter, Venmo's annual revenue run rate was $400 million, or about 2% of PayPal's total revenue. It's not a significant contributor to PayPal's business, but the chart below shows how fast Venmo is scaling. Venmo's annualized revenue has doubled since the beginning of the year. Currently, the three primary ways Venmo makes money are when users instantly transfer money to a debit card or bank account, transact with a Venmo debit card, or use Pay with Venmo to check out at a growing list of select merchants.

Now that Venmo is contributing revenue, the next priority is to improve Venmo's profitability. During the third-quarter conference call, CEO Dan Schulman suggested that Venmo doesn't need as much investment to grow anymore, which should allow for margins to increase: "Venmo used to have more and more money that we would have to put into Venmo each year as a group and it is now, instead of a drain on our margin structure, help on our margin structure as we go forward and I would expect that to continue to happen."

As we'll see in the next section, PayPal has many tools to grow the profit engine of Venmo.

More customers continue to use a monetizable feature

The chart below shows the percentage of Venmo users who are using a monetizable feature. This percentage has risen substantially over the last year from 24% to 35% of the customer base.

Instant Transfer has been the most widely used feature, where users can transfer funds to a linked debit card or bank account for a minimum charge of $0.25, with a maximum fee of $10 per transfer. As more users engage with Venmo for everyday purchases, PayPal is following the trend of other digital payment providers, including Square, in essentially turning the app into a pseudo bank account.

Venmo also recently partnered with American Express to allow Amex card members to split a bill using their PayPal or Venmo account. More features are on the way in 2020. The momentum from all these partnerships explains why CFO John Rainey said during the second-quarter conference call that "Pay with Venmo will be the largest contributor" of Venmo revenue over time.

The strategy to lock in customers

It's clear why management would want to push customers to use Pay with Venmo. If more people are purchasing things with the app, it incentivizes those users to keep their cash with Venmo instead of depositing it with a competing financial service. This puts Venmo in a better competitive position.

Furthermore, more cash in Venmo potentially opens the door for more monetization opportunities over time. The company recently signed a deal with Synchrony Financial to launch a Venmo credit card, which follows the path of other digital payment providers, including Apple, which launched a credit card in August. Users will be able to manage their card from within the app, serving as another incentive to keep customers engaged with Venmo.

The Venmo credit card is another step toward setting up the app to serve as a second bank account to lock in customers and open new pathways to grow profits off a fast-growing payment service.