Copper mining giant Freeport-McMoRan (NYSE:FCX) is in transition. It had to sell a significant portion of its interest in the Grasberg copper and gold mine in Indonesia last year to satisfy a dispute with that government. Because of that and a weak copper market, the company's results slumped during the third quarter.

However, the copper and gold mining company sees the light at the end of the tunnel. Thanks to three strategic initiatives, it's on track to deliver significant growth in the coming years. That upcoming upside was a key theme on the mining company's third-quarter conference call. 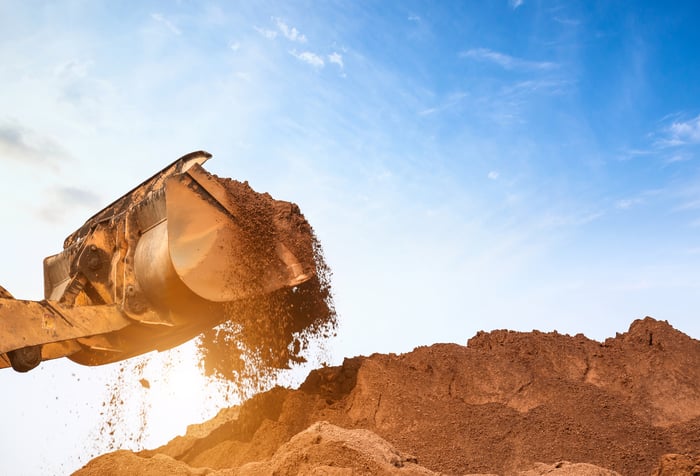 CEO Richard Adkerson spent a great deal of time on that call discussing what lies ahead for the mining company. He noted that the company's focus is on three major initiatives. First, it's working on ramping up a new underground mine at Grasberg, which he called "the most important of those and one that's really key to our future." He stated that the "ramp-up is advancing on schedule." That has the company on track to "achieve low-cost, long-lived production from our underground ore bodies," which "will be a source of significant cash flows for the next 20 years plus."

Next, he noted that the company is commissioning the Lone Star project in Arizona. This initiative is "within our budget and on schedule" with copper production expected next year, according to Adkerson. Overall, the company is two-thirds complete with the initial project. Further, he noted that they've already identified expansion opportunities. Because of that, it "has the likelihood of being a major keystone asset for our company in the future."

The third and final initiative Adkerson highlighted is some "innovation-driven productivity improvements." He stated that "this is a program in which we are using technology tools, machine learning or artificial intelligence, and a coordinated operating structure that's bringing together different capabilities within our company and applying it to basic operations to create value." It has had "remarkable success" in an initial test, which is leading it to expand its efforts into other mines. Because of that, Adkerson said the company has "set an aspirational goal of adding 200 million pounds of copper from these initiatives with very little capital investment."

Adkerson believes that this trio of initiatives will drive significant production and cash flow growth over the next few years. In the company's view, "success in these would result in a 30% increase in copper, 70% increase in gold, approximately 25% reduction in unit cost, and a doubling of our cash flow generation." The company believes it can deliver that growth by 2021. Further, the surge in its earnings would come with no improvement in copper prices.

The company's forecast implies that Freeport-McMoRan would generate roughly $6 billion in EBITDA and more than $4 billion in operating cash flow by 2021, assuming copper averages $2.75 a pound. With the company currently valued at $30 billion, or about 10 times its EBITDA, it could double in value by 2021, assuming it trades at a similar EBITDA multiple.

Meanwhile, there's even more upside potential if copper prices improve, which Adkerson believes is quite likely given that demand is rising faster than supply. With prices at $3.25 per pound, Freeport's EBITDA would top $8 billion, and operating cash flow would be around $6 billion. That additional upside potential led Adkerson to conclude that "Freeport would have a very bright future in the near term."

A mining stock that investors won't want to miss

While Freeport-McMoRan has struggled in recent years, it sees much brighter days ahead. Thanks to its three-pronged strategy to increase production and drive down costs, its earnings and cash flow are on track to double by 2021 with no improvement in the copper market. Add in its upside potential to higher prices, and it's one of the top copper stocks to buy these days.