Please ensure Javascript is enabled for purposes of website accessibility
Free Article Join Over 1 Million Premium Members And Get More In-Depth Stock Guidance and Research
By Rich Smith - Nov 3, 2019 at 8:13AM

And how would Virgin Orbit make money when it gets there?

SpaceX CEO Elon Musk has been talking about going to Mars for a long time, but could Virgin Orbit be the first space company to actually go there without help from NASA?

It may sound crazy. SpaceX has been in business nearly two decades, and has been launching rockets for more than a dozen years already and contracting for NASA nearly that long. In contrast, Virgin Orbit didn't set up shop until just three years ago, and has yet to orbit its first satellite. And yet, despite its head start, SpaceX has already missed one self-imposed deadline to put a spaceship on Mars -- and not by a little.

After promising a few years ago that he'd put a lander on Mars by 2018, Musk has more recently pushed that deadline out to a 2021-to-2023 timeframe. It increasingly seems the SpaceX CEO is shifting his near-term sights toward the Moon, rather than Mars. In doing so, Musk has opened up a window of opportunity for someone else to steal the spotlight.

Last month, stealing the spotlight is exactly what Virgin Orbit, the airplane-to-altitude-to-rocket-to-space company founded by Sir Richard Branson, did. 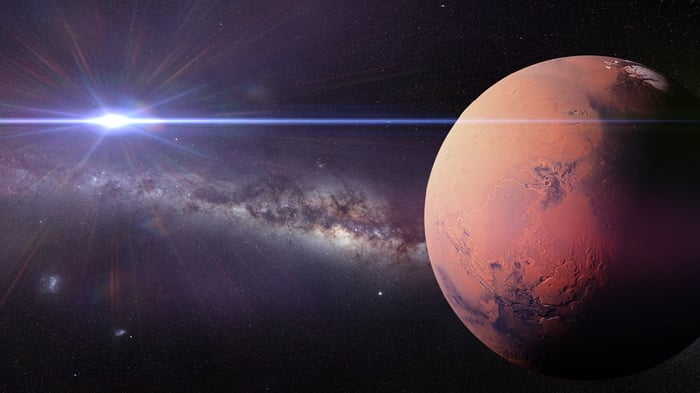 Have airplane, will travel -- to Mars

Targeting a launch date "three years from now," the parties to this Virgin-led consortium plan to launch a series of "up to three" separate Mars missions, the first of which could arrive neck and neck with SpaceX's first unmanned Mars mission (assuming that launch date doesn't shift again).

Few specifics of the missions were revealed initially, although Virgin did drop a few hints, noting that: "spacecraft as small as 50 kg or less can be used for a broad range of opportunities for scientific study, such as collecting imagery of Mars and its moon Phobos, analyzing the Martian atmosphere, or even such an ambitious endeavor as looking for underground reservoirs of water."

And "the mission will fly on Virgin Orbit's LauncherOne rocket." This is the Virgin vehicle that launches from a modified Boeing 747-400 rocket midair, and rockets into space from there. LauncherOne is reported to have a payload capacity of 500 kilograms into low earth orbit, which could translate to 100 kg or less of maximum payload for a Mars mission.

Mathematically speaking, therefore, this sounds like a mission that Virgin Orbit could accomplish if it decides to. But why would it -- and why should you care?

Well, for a couple of reasons actually.

First and foremost, let's state right up front that what Branson and Virgin are pulling here sounds a lot like a publicity stunt, aimed mainly at reminding investors that SpaceX isn't the only game in space-town. Such PR could come in handy if and when Virgin Orbit decides to follow in its sister-company Virgin Galactic's ( SPCE -2.12% ) footsteps and make its shares publicly tradable (whether through a reverse merger, as VG did, or via a more traditional IPO route).

By the same token, though, PR isn't the only thing Virgin Orbit could hope to gain from launching the first privately owned satellite to the Red Planet. Companies both private (Planet Labs) and public (Maxar Technologies) already make good money sending up imaging satellites to snap photos of Earth -- enough so that there's actually quite a bit of competition for these services starting to clog up Earth orbit.

In contrast, Mars orbit would be pretty much virgin territory (if you'll pardon the pun) for Virgin Orbit. Putting a satellite in orbit there would give the company the ability to sell Martian images that cannot be bought anywhere else -- and create an entirely new market for space services in the process.

If you're an investor and have been wondering: "Gee, space is cool and all, but is there really any way companies can make money from this stuff?", well, Virgin Orbit may have just struck upon a way to do just that.