Please ensure Javascript is enabled for purposes of website accessibility
Free Article Join Over 1 Million Premium Members And Get More In-Depth Stock Guidance and Research
By John Ballard - Nov 3, 2019 at 8:00AM

It's now official: Logitech is a lifestyle brand.

On Sept. 26, Logitech announced that it was acquiring one of the leaders in software tools for live-streaming for $89 million. Streamlabs is used by 1.6 million people each month to distribute their content over leading platforms such as Amazon.com's Twitch, Alphabet's YouTube Gaming, Microsoft Mixer, and Facebook Gaming.

With this deal, the hardware peripheral manufacturer is making a significant push into the software services market. Is it a smart move? You bet. 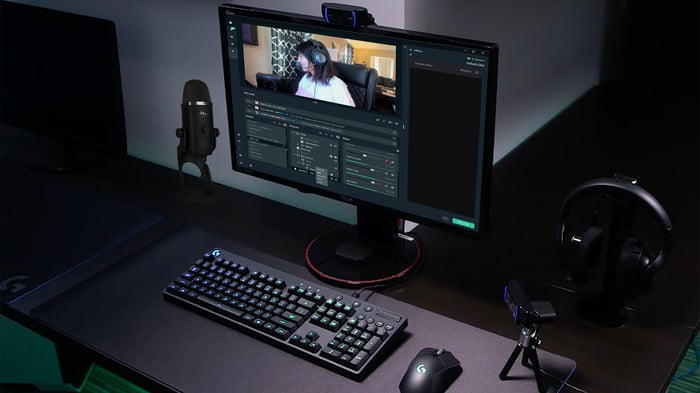 A marriage of hardware and software

Streamlabs is the first sizable business Logitech has purchased outside of the hardware arena, but it's not the company's first foray into services. Last quarter, Logitech announced Sync -- a cloud-based platform that helps companies manage and monitor conferencing devices, such as video cameras. Only a small percentage of offices around the world are equipped with video equipment, so the opportunity for Logitech to offer companies both the hardware and software required is obvious.

The logic of moving into game-streaming software may not be quite as obvious at first glance, but it should fit Logitech's gaming strategy perfectly. Logitech and Streamlabs have been partners for a few years, so they already know each other well. There is clearly an opportunity for Logitech to cross-market its gaming headsets, keyboards, and mice to Streamlabs users. Additionally, streamers need webcams and microphones to broadcast, and Logitech certainly can provide those.

During the company's fiscal second-quarter conference call, an analyst asked management about the opportunity with Streamlabs and how it fits strategically. Here is what Logitech CEO Bracken Darrell had to say:

It's really a direct hit, if you look at what we're doing from a broadcasting and streaming perspective. We make the webcams, we now have the microphones, we even [have] keyboards and mice that are used by streamers to put themselves out there, and [this is] the layer that sits between the streamer or between the podcaster and Twitch or any of the other platforms that people are using. So, it's a really, really cool addition to our business in a way for us to expand into services.

Additionally, Darrell went on to mention the geographic dispersion of streaming as an opportunity to widen Logitech's market reach.

Also, Streamlabs makes money from monthly subscriptions, which enable users to access premium features not available in the free version of the software. That recurring-revenue model gives Streamlabs a higher gross margin than Logitech's core business.

However, Logitech disclosed that the acquisition wouldn't materially impact financial results for fiscal 2020, given how much smaller Streamlabs is.

But this is still a significant addition to Logitech's business. Streamlabs opens the door for the company to market its hardware and software to a booming new market for entertainment that is turning into a legitimate career choice -- though among the millions of gamers who are live-streaming, only a tiny fraction will be lucky enough to earn a significant amount of money from it.

Across the big three game-streaming sites -- Twitch, YouTube Gaming, and Mixer -- people spent more than 3 billion hours watching others play games in the third quarter, according to Streamlabs' data. Twitch is by far the most popular platform, with viewers spending 2.55 billion hours watching content on it in Q3.

Most gamers aren't streaming for fame and fortune -- they're simply doing something they love, sharing the fun, and hoping to generate enough money to make their investments in tech and time worthwhile. Some manage to draw enough of an audience that it becomes a good supplemental income stream or helps them pay their college tuition.  But -- as is normal in any entertainment industry niche -- a few people who combine the right personality, intangibles, and in this case, gaming skills, can earn a high income. One of the most popular streamers -- Tyler "Ninja" Blevins -- earns $500,000 per month.

Gaming and streaming are very much lifestyle choices for millions, and the acquisition of Streamlabs shows that Logitech is thinking of itself more and more like a lifestyle brand.

Streamlabs will flourish under Logitech

Streamlabs is a small acquisition but a huge step for Logitech. The trade war has been a headwind to its sales growth this year, so branching out to services could help smooth out some of the volatility.

Looking ahead, this should be a growth driver for Logitech. The co-founder of Streamlabs, Ali Moiz, sees a great opportunity to expand the business:

Both Streamlabs and Logitech have strong brands in the gaming space with millions of users. While we help streamers broadcast, monetize and look their best via software, Logitech's gear enables them to look, perform and sound amazing. When my brother Murti and I founded Streamlabs our goal was to enable streamers to pursue their passion while making a living. Now that we're part of the Logitech family, we'll be able to take this so much further with their reach, resources and expertise.

It may not move the needle in the next few years, but there is much more value to the Streamlabs acquisition than is suggested by the relatively small $89 million price tag. All said, Logitech appears to have enhanced its growth profile with this move.

2 Leading Growth Stocks to Buy in 2021 and Beyond

Why Logitech International Stock Is a Buy After Earnings

Why You Should Be Buying This Cheap Growth Stock Before Earnings