The leading Canadian cannabis producer fell in sympathy with the rest of the industry.

Canadian cannabis production leader Aurora Cannabis ( ACB -6.39% ) fell 18.9% in October, according to data from S&P Global Market Intelligence. But the bad news doesn't stop there. In fact, Aurora's October decline followed an even greater 20.7% sell-off in September, which itself came after a 10.9% decline in August.

There wasn't too much company-specific news in the month, as Aurora continued to fall with the rest of the large publicly traded cannabis stocks, which have suffered from industrywide bad news. 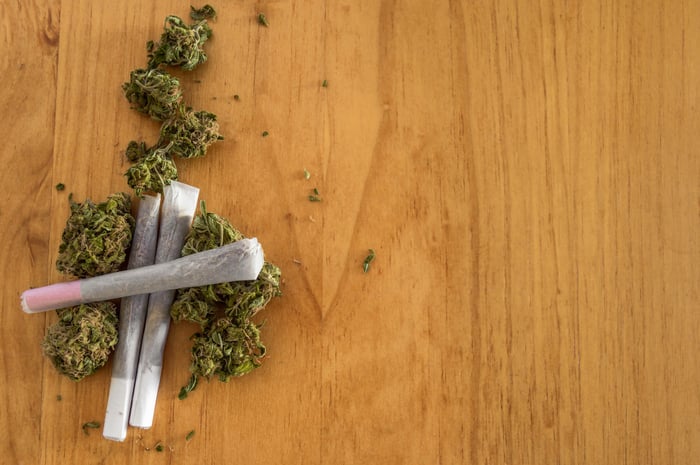 October was supposed to be an exciting month for cannabis companies, as Canada's Cannabis 2.0 took effect on Oct. 17. That was the date when companies received the green light to sell higher-margin derivative products such as edibles and vapes.

However, cannabis stocks have been under fire ever since summer. The problem started with the release of Canada Health data showing that cannabis companies were sitting on huge amounts of inventory that they had been unable to sell. This has been due to both a delay in Canadian infrastructure rollout, as well as competition from the black market.

Earnings reports from several Canadian companies then underwhelmed, including Aurora's September earnings release. That seemed to validate the data that these cannabis producers had vastly oversupplied legal demand in Canada -- and by a large amount.

Then on Oct. 10, fellow Canadian peer HEXO reported horrible earnings and pulled its 2020 full-year guidance, again confirming the oversupply fears and sending the rest of the industry further into a tailspin.

Aurora is in a tough spot, with Canadian infrastructure delays putting pricing pressure on all legal cannabis companies. Even Cannabis 2.0 may not be a saving grace: Though the new rules kicked in this month, derivative products could take another two months to even hit store shelves. It's also hard to determine if demand for these new products could make a dent in the enormous inventories throughout the Canadian system.

Complicating things further, these companies are all losing money, so time is of the essence. Aurora itself has a large 230 million Canadian dollar convertible note due in March 2020. Though the company has options to deal with the looming debt maturity, these could include adding more debt or issuing new equity at low prices.

Aurora is still a best-in-class operator in the cannabis space, but until the Canadian infrastructure problem and associated oversupply disaster are solved, expect more pressure on Aurora and the rest of this fledgling industry.