The drugstore chain is leaving no stone unturned, and the initiatives are being handled so as to minimize potential downsides.

It's easy to understand why investors have been dumping their stakes in Walgreens Boots Alliance (WBA -1.64%) since 2015. Although revenue has continued to grow, income hasn't. The war on high prescription-drug prices has taken a toll, while the integration of nearly 2,000 Rite Aid stores doesn't appear to have been cheap or easy. This year's bottom line isn't expected to turn the corner, either.

For investors who can look a year or two down the road, though, Walgreens offers some overlooked potential. Although there's little it can do to alter the pharmaceutical industry landscape, there's much it can do to extract greater revenue from the front of its stores, which currently generates only around 30% of its sales. Partnerships are how it intends to do that.

A little over a year ago, Walgreens CEO Stefano Pessina commented that "partnerships bring us scale ... beyond anything we could do for ourselves." Since then, Pessina has acted accordingly by cross-selling goods with grocer Kroger, establishing at least 600 LabCorp testing centers in Walgreens stores, and planning to set up 100 Jenny Craig weight-loss shops within Walgreens' store network. The drugstore chain recognizes the most effective path to more foot traffic is through other players' brands. 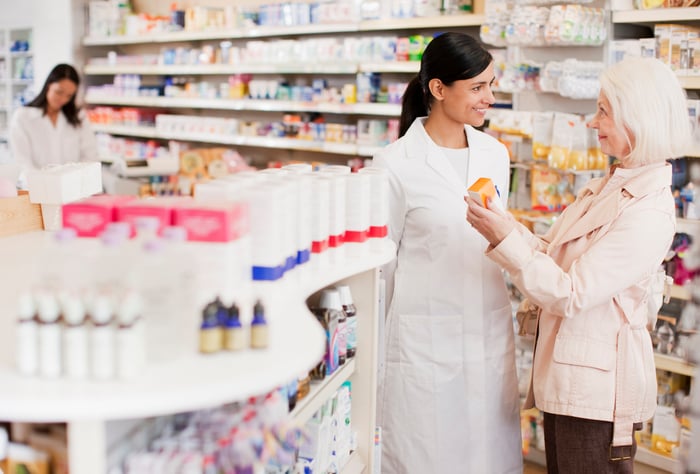 It's a strategy that was unthinkable a few years ago when retailers were defending themselves from the impact of the internet with amped-up protectionism. But times and minds have changed. The recent Toys R Us deal with Target comes to mind: The iconic toy store was brought back to life this year, but in name only; it's relying on the retail chain to fulfill its online orders this year. E-commerce giant Amazon.com allows its customers to return goods to Kohl's stores. ThredUp shops can now be found in Macy's and JCPenney stores, offering used-clothing brands that may not be natively available at either.

Arguably, though, Walgreens is leading the charge on this cross-marketing front. Aside from deals with Kroger, LabCorp, and Jenny Craig, the drugstore chain has also created partnerships with Humana, BirchBox, and even Microsoft, aiming to make the sharing of health-related information more effective. It's even passing out mobile phones to Sprint customers and accepting return packages for FedEx.

Each new offering gives a reason to come to Walgreens stores for consumers who may, in turn, buy something else while they're there.

Buckle up and settle in

Not everyone sees the strategy as a surefire solution to Walgreens' woes.

"All these things should be relatively helpful in driving footfall to stores, especially so because of the convenient location of most Walgreens," said Neil Saunders, a managing director at GlobalData, in the Retail Dive newsletter from late October. "However, none of them address the deficiencies with Walgreens's core retail offer. In other words, they may bring people in, but they won't necessarily get them buying core health and beauty ranges."

The opposing viewpoints underscore the nature of the risk that a position in Walgreens poses right now. Aggravating that risk is the time needed for the company's strategy to either pay off or fail. Morningstar analyst Soo Romanoff explained in her recently updated analysis of Walgreens that "Strategic initiatives have not been included in our forecast but will likely materialize in fiscal 2022 and 2023." Even so, Romanoff pointed out that 80% of the nation's population is near a Walgreens store, and that "Strategic partnerships focused on increasing store utilization with clinical partners to localize community healthcare should be a natural extension in providing coordinated care that will increase stickiness and offset continued reimbursement pressures."

For the most part, that's what the analyst consensus shows -- an earnings lull for the next year, followed by a couple years' worth of measurable growth: 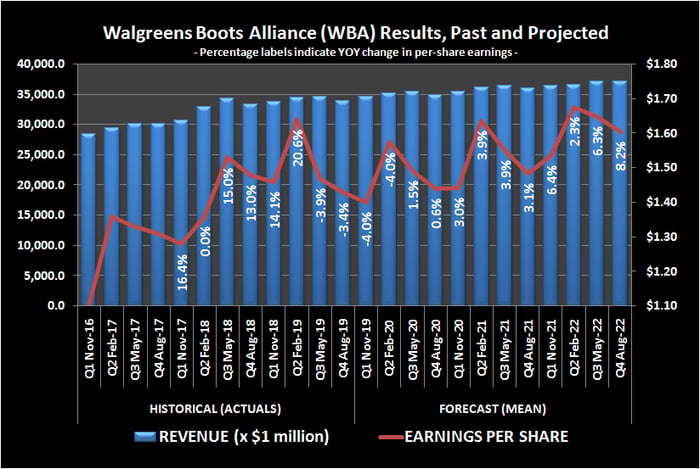 An act of faith

So far, neither Walgreens nor many analysts have been willing to share any detailed impact expectations for these partnerships. That may be a smart, safe decision, given that each initiative only involves a few hundred stores out of nearly 10,000. There's still much to be learned before a major scale-up.

Nevertheless, Pessina, chief medical officer Pat Carroll, and co-chief operating officer Alex Gourlay all appear ready to expand the company's partnering efforts. They also appear to have a good handle on how to measure them while moving forward. Pessina, who wants to "change the model," said that "you can see small things here and there that are already public that can give you this feeling."

The fiscal outlook for this consumer discretionary retailing stock may not look red-hot yet, but the backdrop is increasingly compelling. Sometimes a stock can take a clear turn for the better before the numbers do.