Units of Plains All American Pipeline (NASDAQ:PAA) fell 11.8% in October, according to data provided by S&P Global Market Intelligence. While the energy company had some good news last month, one of its recent successes seemed to weigh on the oil pipeline MLP.

Plains All American has been having a great year. Its earnings soared during the first half of 2019, due in large part to the wide gap in crude oil prices in areas like the Permian Basin that didn't have enough pipeline space. That has allowed Plains All American's supply and logistics segment to cash in by strategically moving this crude to higher-priced markets along the Gulf Coast. 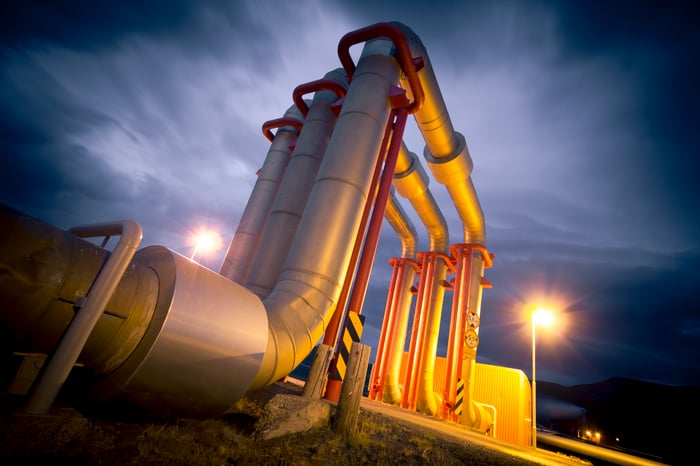 In August, however, the company started up Cactus II, which ships oil from the Permian to the Gulf Coast. That pipeline has been so successful that the price difference between the Permian Basin and the Gulf Coast had narrowed significantly by October. As a result, Plains All American's supply and logistics business won't make quite as much money going forward. It will, however, make some money transporting this oil on Cactus II, though it won't be as much as it expected after it dropped plans to add a $0.05-per-barrel surcharge to help cover the added steel costs due to the Trump administration's tariffs.

This issue seemed to offset some positives last month. Not only did oil prices tick up about 0.2% in October, but Plains All American also formed a joint venture with Holly Energy Partners to fuel more growth. Their partnership will build a new oil pipeline and some additional oil storage capacity in Oklahoma to support a refinery operated by Holly Energy's parent. By splitting the construction costs, the two MLPs can generate higher-return growth for a smaller up-front expense.

Plains All American had been making a mint in recent months by moving low-priced oil out of the Permian to higher-priced markets along the Gulf Coast. However, with the start-up of its Cactus II pipeline, that discount has narrowed significantly, which means it will make less money on those activities. Still, the project, as well as the others it has under construction, should enable it to grow its steadier fee-based cash flow in the coming years. That should allow Plains All American to continue increasing its high-yield dividend. This long-term growth makes it a great income stock to buy -- even more so after last month's sell-off.