The Mac maker now has an estimated 204 million active iPhones in the U.S.

As Apple's (AAPL -0.80%) iPhone business continues to slow, with iPhone revenue falling 9% last quarter, the company's installed base growth is likewise slowing. That's especially true in developed markets like the U.S., where most purchases are upgrades instead of first-time users. Consumer Intelligence Research Partners (CIRP) has released new estimates this week that suggest the Cupertino tech giant's U.S. iPhone installed base inched higher to 204 million at the end of the third quarter. 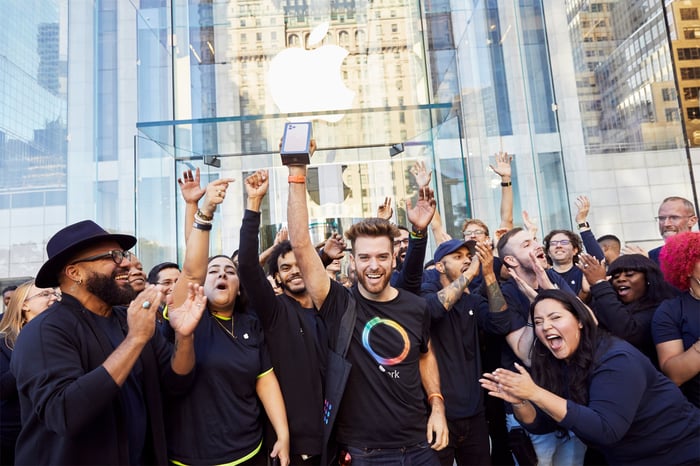 CIRP estimates that Apple sold 43 million iPhones in the third quarter at an average selling price (ASP) of $783. That would represent an 8% drop compared to the 46.9 million iPhones that Apple sold a year ago, which was the final quarter that it disclosed unit sales. This represented the lowest installed base growth in many years, according to CIRP. The research firm bases its estimates on a survey of 500 U.S. Apple customers.

"Apple added the fewest number of iPhones to the US installed base in a quarter in six years," CIRP partner Josh Lowitz said in a statement. "Both quarterly and annual growth have slowed to the lowest levels we've seen since we started tracking iPhone sales and retirements in 2012."

"And so the installed base is clearly a piece of it getting the trade-in program going, and the secondary market moving has been helpful in that as well," CEO Tim Cook said. Apple's average revenue per user (ARPU) is also on the rise, Cook added, without providing a specific figure. The third lever is "getting more people that are enjoying things for free to pay for some of the premium services," according to Cook.