Facebook (NASDAQ:FB) kicked off the week by announcing a corporate facelift: a new branding effort designed to better distinguish Facebook the social networking platform from Facebook the company. The company has gotten so large after swallowing up other social media upstarts over the years that Facebook wants it to be crystal clear when you're using one of its platforms, according to Chief Marketing Officer Antonio Lucio.

The company had added "from Facebook" to its core family of apps over the summer, but Facebook will soon display the new logo more prominently over "the coming weeks." The main Facebook app is retaining its existing branding with no changes.

The new logo is fairly generic but features "custom typography and capitalization to create visual distinction between the company and app," Lucio wrote in a blog post announcing the change. "People should know which companies make the products they use," Lucio added. "Our main services include the Facebook app, Messenger, Instagram, WhatsApp, Oculus, Workplace, Portal and Calibra." 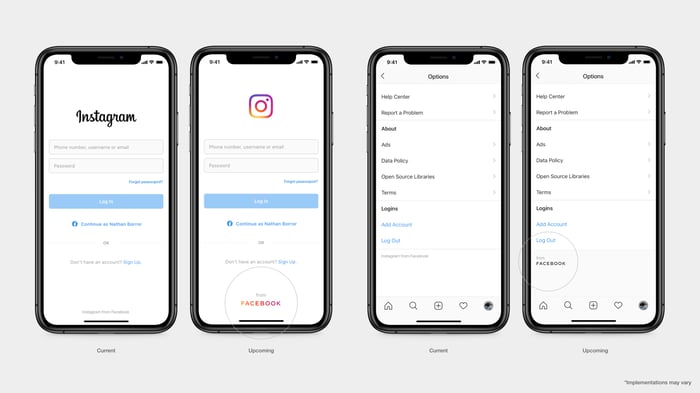 While acquisitions like Instagram and WhatsApp had originally retained quite a bit of independence after those respective deals closed, CEO Mark Zuckerberg has been exerting more control and integrating the teams more closely in recent years. Zuck's overbearing influence was reportedly the main reason why Instagram co-founders Kevin Systrom and Mike Krieger resigned last year.

"This brand change is a way to better communicate our ownership structure to the people and businesses who use our services to connect, share, build community and grow their audiences," according to Lucio.

To say that Facebook's brand and reputation have been severely damaged over the past three years would be quite an understatement. Attaching "from Facebook" to the other apps a few months ago was a risky move since that toxicity could spread. That risk will only be compounded once Facebook rolls out the more prominent branding.

Facebook's brand value has been declining for the past two years, falling 12% to $39.9 billion this year, according to brand consultancy Interbrand. 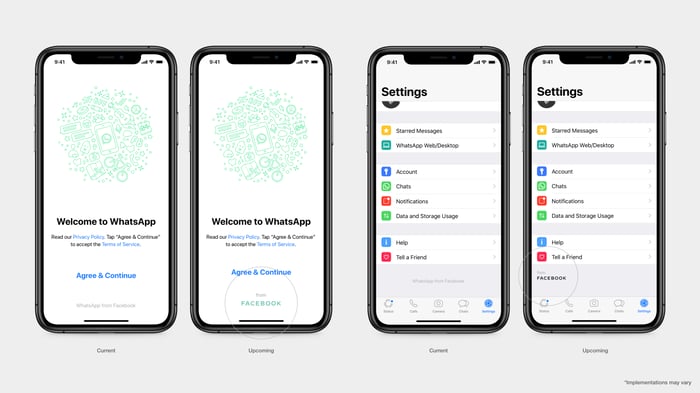 While investors are well aware, given the growing financial importance of Instagram, a surprisingly high number of average consumers don't realize that the tech giant owns Instagram and WhatsApp: 71% of Americans didn't know that Facebook owns the two platforms, according to a survey released last month by Pew Research Center.

In an interview with Bloomberg, Lucio isn't concerned. On the contrary, the marketing chief said that when people learn of Facebook's ownership, "the overall appreciation for the Facebook family actually grows."

That may not be true for everyone, though. One Instagram user was horrified when she found out, according to a CBS report from early 2018. When asked about her reaction, the college student explained, "Because I've been hearing about Mark Zuckerberg and a lot of people are calling him a slimy weasel."

Incredibly, Lucio even noted that Facebook considered changing its corporate name. That idea was shot down, as the company didn't want to look like it was trying to run away from its reputation problems. Instead, Facebook wants to be transparent and confront its brand issues head-on.

But given the depths of its branding woes, Facebook is going to need a lot more than a new logo to regain user trust.