In February, I picked Tandem Diabetes (NASDAQ:TNDM) as my top diabetes stock to watch. Little did I know at the time just how exciting this stock would be. Its shares had soared nearly 48% year to date heading into its third-quarter update.

Tandem announced its Q3 results after the market closed on Monday. And investors yet again had reasons to be excited about the company's performance. Here are the highlights from Tandem's Q3 results. 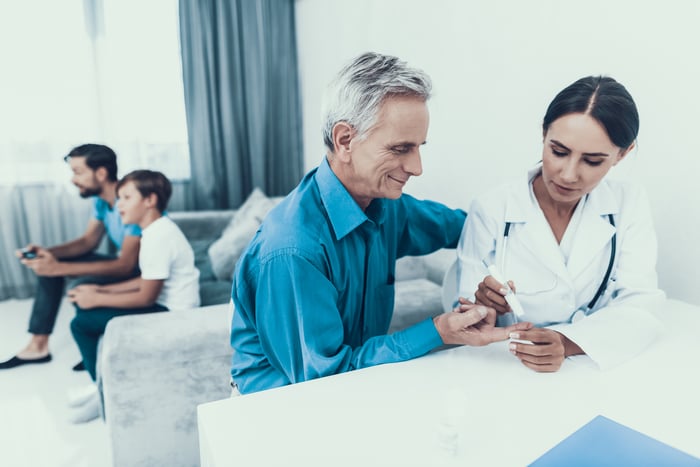 Tandem reported third-quarter revenue of $94.7 million, more than double the revenue of $46.3 million posted in the same quarter of 2018. This result also trounced the average analysts' revenue estimate of $89.14 million.

The company announced adjusted earnings before interest, taxes, depreciation, and amortization (EBITDA) of $12.7 million, or 13% of total sales. That was much better than the negative adjusted EBITDA of $4.7 million in the third quarter of last year.

A rise in domestic insulin pump shipments drove the whopping increase in Tandem's sales in the third quarter. The company announced shipments of 13,814 pumps, an 87% year-over-year increase. This rise was primarily due to an 80% jump in domestic sales to $78.8 million. Tandem reported international shipments of 4,025 pumps, with international sales totaling $15.8 million in the third quarter -- up 532% from the prior-year period.

Tandem's bottom-line improvement was driven largely by its stronger sales. However, the year-over-year comparison was also helped because of a non-cash charge in Q3 of 2018 totaling $12.3 million related to the change in the fair value of warrants that were outstanding at the time.

CEO John Sheridan said Tandem's Q3 results "once again demonstrate that technology drives customer adoption, and that there is meaningful long-term opportunity to continue bringing the benefits of insulin pump therapy to people with diabetes worldwide." The company's numbers certainly appeared to back up his optimism.

Despite all of this very good news, Tandem's shares sank more than 12% in after-hours trading on Monday. Investing in growth stocks like Tandem can sometimes cause you to scratch your head. Why would a stock fall after positive quarterly results? Sometimes even great earnings fail to meet the "whisper number" -- a more aggressive earnings estimate that's expected but isn't reflected in published Wall Street estimates. That could be the case for Tandem.

Regardless of the initial stock movement, though, Tandem turned in a strong Q3 performance. The company appears to be in great shape for continued momentum. I look for Tandem Diabetes Care to remain an exciting stock over the long run.