Please ensure Javascript is enabled for purposes of website accessibility
Log In Help Join The Motley Fool
Free Article Join Over 1 Million Premium Members And Get More In-Depth Stock Guidance and Research
By Lee Samaha - Nov 5, 2019 at 6:45AM

The machine vision company's growth has faltered, but is it a long-term or temporary issue?

On a current P/E ratio of more than 53 time earnings, machine vision company Cognex Corporation (CGNX 1.20%) is certainly priced as a growth stock. However, the company's revenue and earnings growth has faltered in 2019 and analyst projections for 2020 put in on par with 2018. Are the stock's growth days over? And if so, does that mean the stock is massively overvalued right now?

The chart below shows Cognex's stuttering growth in the last year or so. To understand what's going on, you have to dig into how Cognex actually makes money. Alongside many other automation and robotics stocks Cognex has heavy exposure to capital spending trends in the automotive and consumer electronics industries. There's a perfectly rational reason for this; the automotive and electrical and electronics industries are the early adopters of automation and machine vision. 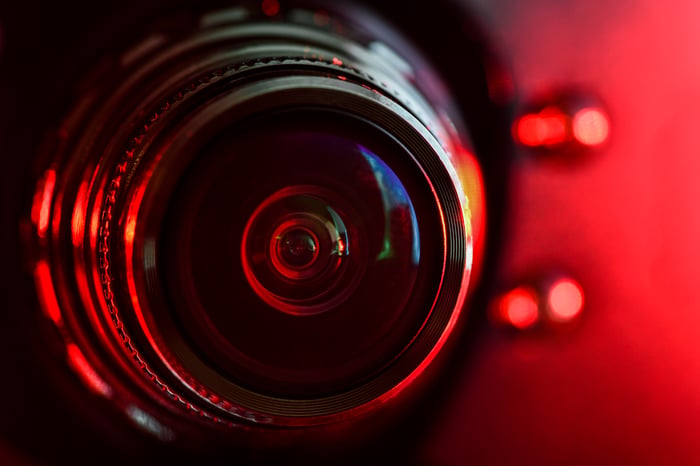 As such, the consumer electronics and automotive industries have been responsible for more than 50% of Cognex's revenue in recent years, according to CEO Rob Willett. Indeed, the company references both as risk factors in its annual filings to the Securities and Exchange Commission stating "Our business is impacted by the level of capital spending in these industries, as well as the product design cycles of our major customers in these industries." For reference, Apple Inc is Cognex's single biggest customer, responsible for 15% of total revenue in 2018.

Unfortunately, a combination of a declining automotive production and smartphone sales in 2019 has seen Cognex's customers holding back on capital spending, and it's not hard to see why the company's revenue is set to decline in 2019. 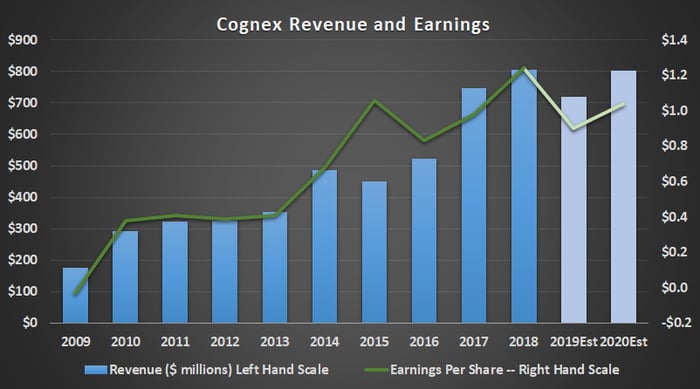 The optimistic case sees the synchronized slowdown in automotive and consumer electronics spending as a cyclical issue which will be resolved over time -- after all consumers will still need cars and smartphones. Furthermore, Cognex is growing sales in other end markets such as logistics (mainly for e-commerce fulfillment centers), food and beverage, life sciences, airport baggage handling, and mobile terminals.

Management's estimates for its served market, current market share, and long-term growth rates are shown below. The combination of long-term end-market growth and Cognex's ability to gain market share give management the confidence to target "20% compound annual growth, mid-70%s gross margin, and 30% operating margin" with a belief that logistics can "continue to grow at that 50% rate over the long term" according to Willett on the recent earnings call.

Based on the fact that Cognex's revenue had a compound annual growth rate (CAGR) of 18.4% from 2009-2018, management's targets do look attainable. Moreover, the increasing adoption of the Internet of Things in the industrial sector is likely to spur spending on robotics and automation -- good news for Cognex's machine vision solutions which help guide, monitor, and control automated processes.

That said, the market got spooked when Cognex disclosed that its logistics revenue -- an area the company has been relying on to offset declines in automotive and consumer electronics -- would actually decrease in the fourth quarter due to a "major customer delaying delivery of large orders for new site" according to Willett.

Naturally this can cause concern that the orders won't actually be made, but Willett was clear that it's down to a timing in the customer's "engineering and automation rollout" and served notice that logistics orders are lumpy.

Frankly, he has a point. For example, Honeywell's (HON 2.63%) warehouse automation company, Intelligrated, also saw a pushout in orders from the second quarter -- something that caused similar consternation a few months ago -- but the good news is they ultimately fell into place in September.

What does it all mean to investors?

Putting all of this together, the logistics shortfall in the fourth quarter looks like a temporary issue -- e-commerce growth and warehouse automation both continue to grow strongly -- and over time the automotive and consumer electronics industries will surely grow again with automation likely to be a growing part of their capital spending. All told, Cognex has plenty of potential to get back on the growth track.