To one analyst on Wall Street, that fact alone is reason enough to buy the stock. 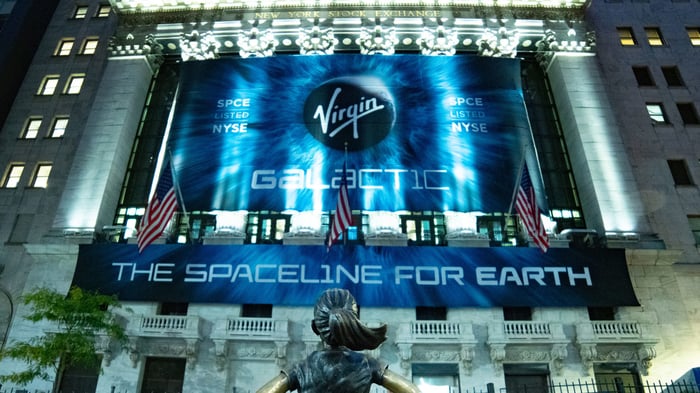 This morning, investment banker Vertical Research announced it is initiating coverage of Virgin Galactic with a $20 price target and a buy rating -- the first such Wall Street firm to do so.

Vertical cited two main reasons for endorsing Virgin Galactic. The first is that simple fact that at present, Virgin Galactic is the only pure play on human spaceflight that an individual investor can invest in, anywhere in the world. Sure, there are other ways to invest in spaceflight:

And there are also other pure plays on manned spaceflight, such as Blue Origin or SpaceX -- but neither of those is currently publicly traded.

Virgin Galactic by the numbers

And yet, more than a week after Virgin Galactic began trading on the NYSE, no one else on Wall Street has recommended buying the stock. Why is that?

Investors got a good look at some of those potential reasons last week, when the company filed an 8-K with the SEC describing a few of its key financial metrics.

In that report, Virgin revealed that, for example, it has very little revenue at present -- only about $2.4 million in sales booked over the past six months -- and that it's losing a lot of money as it prepares to begin commercial operations ($96.4 million in net losses accrued year to date).

Of course, this is all probably to be expected.

Already, Virgin Galactic has arguably proven its spacecraft capable of flying well-heeled tourists to the edge of space and returning them to Earth safely. It's taken in some $81.1 million in prepayments from more than 600 would-be passengers. However, Virgin doesn't get to book those payments as revenue until it actually provides the service for which the passengers have paid -- and after pushing its launch date once again last month, the company now says it doesn't expect to begin commercial operation until next year.

In Vertical Research's opinion, this may be the real reason investors have shown themselves to be leery of Virgin Galactic stock: Until the company flies a bunch of tourists to space and brings them back safely, there's going to be a lingering suspicion that it cannot. And perhaps this is the real reason why after Virgin's shares began trading, they ended last week down 18%.

That's a steep hit to take so early in the space game, but as Vertical Research explains today in a note covered by TheFly.com, if what investors are worried about is Virgin's "technical" ability to successfully build and fly a spaceship for space tourism, well, that risk is "less draconian than the stock appears to be pricing in."

Over the past five years, multiple successful test flights since the crash that destroyed the company's first SpaceShipTwo in 2014 have gone off without a hitch. And if Virgin is delaying its first commercial flight a bit longer than investors might like, well, if it's doing this out of an abundance of caution, then that's not something to criticize -- but to applaud.

Mind you, I don't know that I'm 100% convinced that Vertical is right to value Virgin Galactic shares at $20 -- I'm going to need to see proof of the revenue the company can make, and proof that it can be made profitably before I make that call. But as far as the technical risk goes, I agree with Vertical Research on this one:

Virgin Galactic stock at less than $10 looks like a good bet to me -- and I'd bet that as soon as that first commercial flight breaks above the Karman line, shares will go higher.