Owning Under Armour (NYSE:UA) (NYSE:UAA) stock hasn't been easy these past few weeks.

Last month, the news broke that Under Armour's founder and hard-charging CEO Kevin Plank is stepping down after more then 20 years at the helm. Then, on Monday, the second shoe dropped. Under Armour released a third-quarter earnings report chock-full of bad news, sending shares down 18% in a day.

The good news is that after that big drop, the stock rebounded a bit (5% and change) on Tuesday. The better news is that one analyst on Wall Street thinks this could be only the beginning of an even bigger rebound -- one that could last for the next four years and see Under Armour grow its earnings at an astounding 40%-a-year rate. 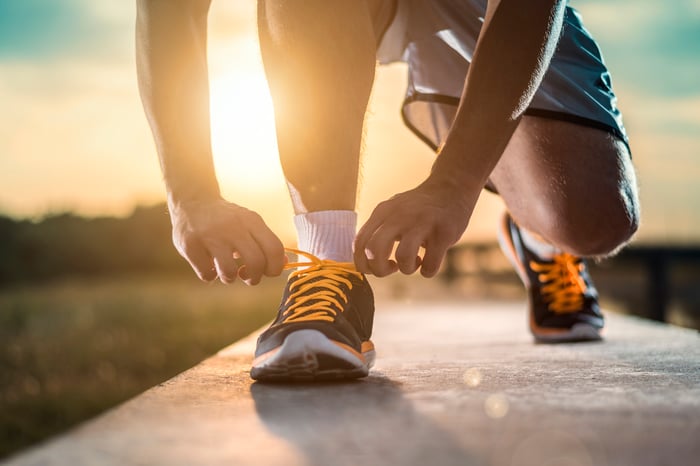 A fan of Under Armour

Announcing that "now is the right time to own Under Armour shares," investment banker Raymond James said this morning that it is resuming coverage of the stock after its big drop. In a note covered by StreetInsider.com, the analyst argued that "[a]fter a period of challenging results and a rebasing of earnings" that has seen sales growth stuck in the single digits for the last three years (according to S&P Global Market Intelligence data), the company is finally "on the cusp of a multi-year growth cycle" again.

Analogizing the company's current "setup" to where Lululemon and Adidas were "in the early stages of [their] turnarounds," Raymond James believes Under Armour's position today is "very similar," and with a share price now down 84% from its highs of 2015, the stock is finally ready to make a comeback.

How fast can Under Armour run?

How big of a comeback are we talking about here?

The past three years have seen Under Armour's earnings fall at an annual rate of 24.5%. But over the next four years, Raymond James predicts this shrinkage could reverse, and profits could surge as much as "40% annually through 2023."

Admittedly, not everyone on Wall Street is so optimistic. "We note that ... there is some skepticism around UAA's turnaround and growth plans," Raymond James acknowledges. But even so, the consensus of most analysts following the stock is that earnings will indeed rebound, and grow at perhaps 32% annually over the next five years -- not 40%, but still not bad at all.

Now what does all this mean to investors?

Valued on its trailing-12-month earnings of $112 million, Under Armour at $7.7 billion in market capitalization still looks pretty pricey, with a P/E ratio of about 69. The company's cash flow statement, on the other hand, paints a much prettier picture.

Free cash flow at Under Armour over the past 12 months was an impressive $457 million -- four times what the company's GAAP net income would imply. And valued on free cash flow rather than earnings, the stock's multiple falls to just 17, which doesn't seem to me a whole lot to pay for 40% earnings growth -- or 32%, either!

Granted, things could still go wrong with this buy thesis. As Under Armour revealed in this week's earnings report, the Department of Justice and the Securities and Exchange Commission are both looking into allegations of past accounting improprieties at the company. Law firms are hurrying to ready shareholder derivative lawsuits against Under Armour, and those could dog the stock for quite some time. Sales are still falling in North America and its direct-to-consumer division.

And even if Raymond James is ultimately proven correct about Under Armour's turnaround, a recovery won't happen immediately. To the contrary, the sports apparel specialist actually cut its sales guidance for this year, predicting sales will grow only about 2% in 2019.

Attractive as the stock's price-to-free-cash-flow ratio may look today, if we're really looking at a multiyear turnaround at Under Armour, investors should still have plenty of time to weigh the pros and cons of investing in this stock. At the very least, I'd counsel waiting until the end-of-year tax loss selling is over before making any investment in Under Armour.