Facing its sharpest one day decline in its five-year history as a public company, and ranking as one of the steepest falling stocks of the week, shares of Grubhub (NYSE:GRUB), the once-dominant food delivery operator, tanked more than 40% after a disappointing earnings announcement. Back in 2014, Grubhub's IPO saw their shares trading at $40 on opening day. The company has seen its market value tumble by more than 60% over the last year, recently hitting a 52 week low near $32 a share.

For the third quarter 2019, while revenues were $322.1 million, a 30% year-over-year increase from $247.2 million, Grubhub net income plummeted from $22.7 million down to $1.0 million. If a company grows its top-line revenue, it should also increase profits, at least that is what we learned in Economics 101. Grubhub grew the top line, but fell far short of its sales target and barely made any income at all.

This type of surprise negative earnings announcement often marks the beginning of a protracted bear run for a company. The high flying Wall Street darlings from last year can soon become the dog stocks for next year. 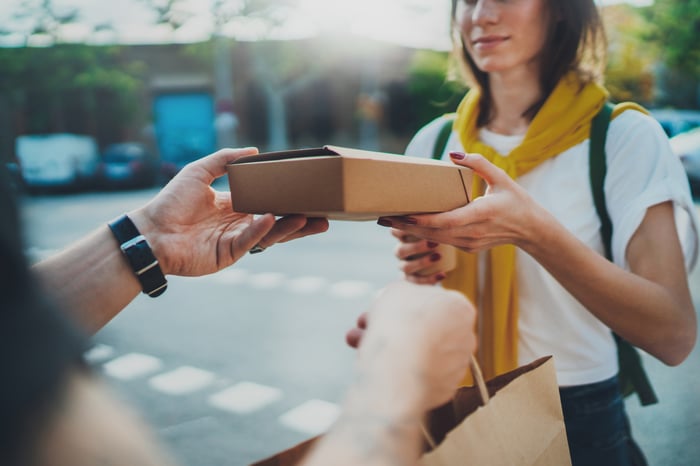 What really hit the share price was not so much the drop in earnings, which certainly could cause a double-digit fall. While Grubhub's daily order numbers, or "Daily Average Grubhubs" (DAG) increased by 10%, that was at the rock bottom end of expectation. Citing the slow-growth DAG metric, Matt Maloney, founder and CEO, commented in a letter to investors "supply innovations in online takeout have been played out and annual growth is slowing and returning to a more normal longer-term state which we believe will settle in the low double digits, except that there are multiple players all competing for the same new diners and order growth". He added, "Online diners are becoming more promiscuous."

In plain English, that corporate-speak statement basically says that competition is fierce and that diners are ordering from whatever delivery app they open on their phone.

The kill shot trigger the fall in the share price was that investors saw the weak numbers, digested the statement issued by Maloney and quickly arrived at the conclusion that online restaurant delivery is no longer a hot new industry -- but rather a slow growth mature market. There is a world of difference in valuing a high growth company -- which will typically traded at a Price to Earnings Ratio of 15, 20 or far higher -- and a slow growth company which will trade at a much lower PE ratio. Based on Maloney's statement combined with a limited outlook for increasing the top line growth rate, Grubhub is entering a slow growth mature market far sooner than expected.

A notable competitor to Grubhub is the global taxi platform Uber Technologies (NYSE:UBER), which offers UberEats. Grubhub's biggest rival for market share and one with enormously deep pockets to spend on building out a delivery platform, Uber is also getting hammered in the stock market.

Shortly after the announcement, several analysts started bailing out, among them Oppenheimer, who downgraded the outlook for Grubhub stock from outperform to underperforming. "Competitive food delivery offerings (such as Uber and DoorDash) are eroding Grubhub usage and expected to worsen in Q4, suggesting historical lifetime value is no longer reliable," Oppenheimer reported.

In short, the bloom is off the rose. The long term growth outlook for online food delivery is falling in line with the slow growth expected from other highly competitive retail sectors where consumers are inundated with choice-whether fast-food franchises or fast fashion. And free for all competition, as we know from Sears, K-Mart, Forever 21, or any other retail business, makes it very tough to make a buck. Consumers can pop over the next competitive service offering as quickly as they can download a new app on their iPhone.

Additionally, restaurants also know they have a choice of delivery service and are starting to balk at high commissions charged by those services. Restaurants across the nation operate under very tight profit margins where even penny counts. The commission of up to 30% charged by delivery services is a huge expense for any restaurant. "They hate the relationship and they are getting raked over the coals," Ben Gaddis, told Reuters. Gaddis is president of T3, a digital marketing and tech consultant to restaurants such as Pizza Hut and Schlotzsky's.

In the minds of investors, now that Grubhub, along with DoorDash and Uber, is moving into a low growth category, the share price will likely stagnate. Investors will rarely pay a sky high premium for a low growth stock. As the growth rate for Grubhub revenues will barely hit the double digits, the PE ratio will also likely be stuck at a low multiple. If you are looking for high flying tech stocks with huge upside potential, Grubhub should drop off your radar screen.