RAIN RFID specialist Impinj (NASDAQ:PI) reported third-quarter earnings Monday evening, smashing Wall Street's estimates thanks to rising demand for its products and services. Here's a closer look at the report, which sent Impinj's share prices as much as 7.6% higher in Tuesday's trading session.

Impinj's third-quarter results by the numbers

Before we go any further, let's clarify that RAIN and RFID are both short for "radio frequency identification." The naming standards may be confusing, but RAIN is a clearly defined subset of the much wider RFID category, using a specific range of ultra-high frequency radio signals in the 860 to 960 MHz bands. This is where Impinj focuses its efforts, as that specific slice of radio spectrum has been widely licensed for product-tracking purposes all around the world. 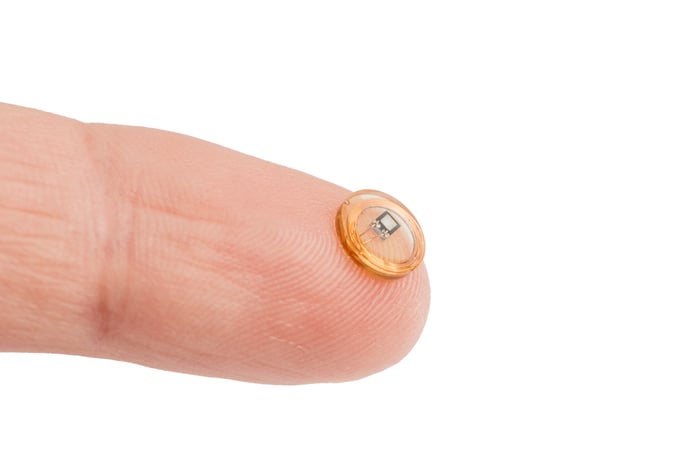 This tiny RFID chip may look large and dated when the M700 series hits the street next year. Image source: Getty Images.

Among other upsides, the M700 series promises to unlock new target markets for the company, such as loss-prevention functions in retail stores and related product delivery processes.

"The Impinj M700 IC has capabilities in a specifically focused on loss prevention to allow embedded tagging with seamless product returns and to allow loss prevention with friction-less self-checkout," CEO Chris Diorio explained on the third-quarter earnings call. He continued:

It has been a use case that's been in front of the RAIN industry for a long period of time. In fact, retailers began talking about it. I think more than 10 years ago, but the technology wasn't ready. And now with the Impinj M700, with its sensitivity, small size, and the features we have embedded in it, and with our innovations on the system software algorithms, we believe the opportunity is now to start addressing that use case and it is a very large opportunity.

Management expects fourth-quarter sales to land near $38 million, roughly 10% ahead of the year-ago period and in line with the current analyst view. It's a different story on the bottom line, where the analyst consensus calls points to a loss of $0.03 per share but Impinj's guidance indicates a net profit in the neighborhood of $0.01 per share.

Keep in mind that Impinj has exceeded the high end of its own earnings guidance in each of the past six quarters. You shouldn't bet the farm on a seventh sequential surprise, but the company does appear to have found a certain rhythm to its financial reports.

The stock has now delivered a 54% gain over the past 52 weeks, all thanks to that steady stream of rosy earnings reports. Impinj and its RAIN RFID technology are poised to carve out a serious target market in the Internet of Things revolution that's taking place right now.