Keurig Dr Pepper (NYSE:DPS) crossed over the one-year anniversary of the merger of Dr Pepper Snapple Group and Keurig Green Mountain early in the third quarter of 2019. The beverage conglomerate's quarterly scorecard highlights the advantage of combining packaged coffee and beverages businesses: In a middling quarter for bottled beverages, concentrates and coffee helped push total revenue into positive territory against the prior year.

As a result, a marginally higher top line surpassed investors' expectations, and the consumer staples stalwart displayed effervescence Thursday following the release, with shares gaining 8% on the session at midday.

Note that all comparative numbers that follow refer to the prior-year quarter, on a pro forma basis (i.e., combining prior-year results for Dr Pepper Snapple Group and Keurig Green Mountain).

What happened with Keurig Dr Pepper this quarter? 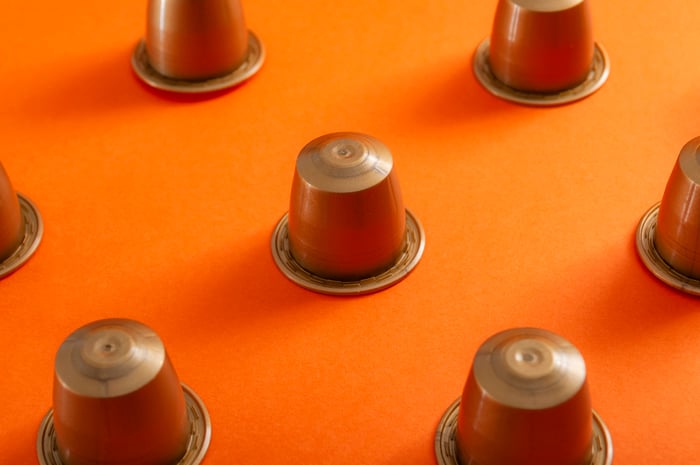 In the organization's earnings filing, CEO Bob Gamgort alluded to the pursuit of long-term goals, such as the realization of $600 million in cumulative cost synergies from the merger by 2021, while also lauding the execution that characterized the last three months:

As 2019 draws to a close, the company reaffirmed previously shared full-year targets on Thursday. Management expects that organic revenue will expand at a 3% rate for the entire year against 2018. The company anticipates increasing diluted EPS year over year by 15% to 17%, which should result in earnings of $1.20 to $1.22 per share.

In addition, the beverage behemoth disclosed that it's on track to realize $200 million in cost synergies this year, which will keep it on pace to hit its $600 million target by the end of 2021. Finally, the organization's enviable cash generation will continue into the fourth quarter, culminating in a cool $2.3 billion to $2.5 billion in free cash flow in 2019.