Keurig Dr Pepper ( DPS ) showed it still has pricing power in its mix of coffee and soda as the beverage conglomerate posted better sales and earnings than Wall Street expected, fueled mostly by its ability to raise prices.

The owner of coffee, tea, and soda brands such as Keurig, Snapple, and Canada Dry was also able to report increasing sales volume, but its performance continues to be dragged down by its brand partnerships, which were sent into tumult when Keurig and Dr Pepper merged last year.

Still, the beverage giant looks on track to emerge the better for the union, even if it means it may experience some lumpy quarters. The quarter allowed the beverage giant to reaffirm its adjusted earnings growth for the year to be in a range of 15% to 17%, or $1.20 to $1.22 per share. 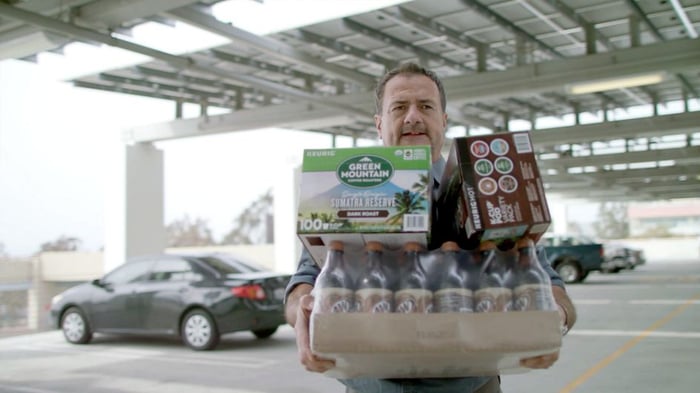 Keurig's packaged beverage segment was able to generate sales growth of 5.6%, hitting $1.3 billion, even though it was hampered by its allied brands, which have seen more headwinds than the company expected. Fortunately, the business that has served as an anchor since the merger will turn into a tailwind for Keurig in the fourth quarter, and come 2020 it no longer expects the allied brand division to be an issue.

Which is good, because Keurig's own drinks business is actually performing quite well, recording 3% underlying sales growth as CORE Hydration, Dr Pepper, and Canada Dry gained in the quarter, particularly the latter, which enjoyed double-digit sales growth as it infused its original core soda with new flavors, such as orangeade and lemonade. It also benefited from better results from its Motts, Sunkist, and A&W brands.

Even better was CORE Hydration, a premium bottled purified water, which had been an allied brand prior to the merger, but was subsequently acquired as an own brand for $525 million. It's enjoyed a better-than-30% increase in retail sales over the past 12 months. At the time of the acquisition, Keurig noted net sales of all CORE beverages had grown at an average annualized rate of approximately 115% over the prior three years.

Allied brand performance remains a mess, and Keurig says they're going to provide a 200-basis-point headwind to net sales for the year instead of the 100-basis-point drag it had originally forecast.

At least allied brands are not a major contributor to sales, generating only $350 million in retail consumption and representing 3% of cold beverage sales. Keurig says it views them as a gateway to higher growth segments that it previously didn't have access to, but it is moving much slower than anticipated.

The recently signed agreement with McDonald's ( MCD 0.21% ) for its McCafe line of K-cup coffee, however, should provide a real caffeinated jolt to sales, though it won't come till next year, as the partnership doesn't take effect till mid-2020. Keurig will also have sole responsibility for sourcing the coffee, manufacturing, distribution, selling, and marketing the brand in all forms across all channels.

Coffee itself was a big win this quarter for Keurig, which saw single-serve pod consumption volume grow 2%, according to analysts at IRI, which the beverage company notes actually undercounts the growth rate because it includes only channels the firm checks, which are only half of Keurig's total K-cup pod business. Online sales, for example, exceeded that rate of growth, and pod shipments as a whole grew over 6% for the period. And Keurig still owns that market with a better-than-81% share over the past year.

New innovations, such as its just-introduced K-Duo, an appliance that can make both single servings and a full pot, has the potential to bring in many new customers who, like this writer, subsist on pots of coffee, not one cup at a time.

Keurig Dr Pepper is still untying the knots created by its merger and the havoc with its allied brands that that merger created. Still, they should be dealt with by the beginning of the new year, and this beverage company looks ready to roll higher.