Please ensure Javascript is enabled for purposes of website accessibility
Free Article Join Over 1 Million Premium Members And Get More In-Depth Stock Guidance and Research
By Daniel B. Kline - Aug 9, 2019 at 6:04AM

The mountain of used coffee pods it generates is anything but green, but the company appears to be making progress on changing that.

When Keurig's single-serving coffee pods first hit the market, they were a novelty, and even something of a status symbol. The cup-at-a-time coffeemakers that used them cost hundreds of dollars, and the K-Cup pods themselves were not nearly as widely available as they are today.

But the convenience they offered proved to be something that consumers desired. Mass-market growth, as well as the merger of  Keurig with longtime partner Green Mountain Coffee Roasters, led to the machines becoming more affordable, and then nearly ubiquitous. Brewing whole pots of coffee rapidly fell out of fashion.

For a while, the public simply marveled at the way the new machines allowed each person in a home or office to enjoy their own fresh cup of java. But eventually, a backlash developed as people began contemplating the waste generated each year in the form of billions of disposable, non-recyclable plastic K-Cup pods. Even the inventor of the machines called them "his biggest regret" for that reason.

That's a problem the company's leaders promised to tackle when its current iteration came together last year in the merger that created Keurig Dr Pepper ( DPS ). Last week, they released their first Drink Well. Do Good. report, which addresses a number of conscious-capitalism concerns and includes an update on their efforts to reduce the impact of K-cups on the environment. 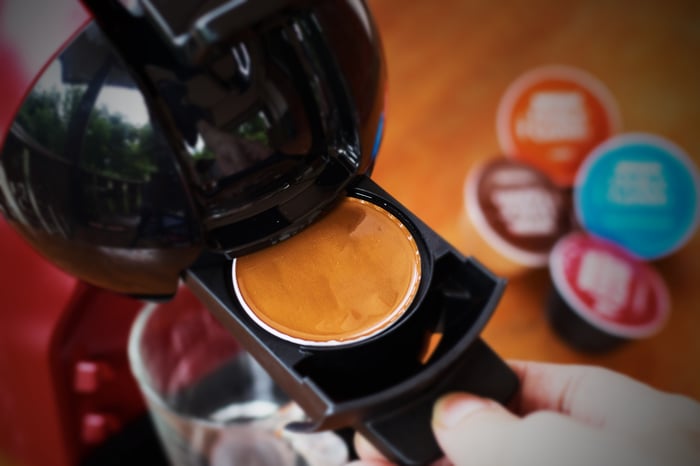 An oft-quoted statistic trumpeted by the #KilltheKCup movement is that in 2013, what was then Keurig Green Mountain "produced enough coffee pods to wrap around the equator 10.5 times." That disturbing image helped galvanize discontent among a segment of the caffeine-consuming public. The rumbles grew loud enough that in 2018, the company set a goal to convert all of its packaging -- not just K-Cups -- into recyclable or compostable formats by 2025, as well as to increase its use of recycled materials, according to a press release.

According to its report, it has made some progress toward those green goals:

The company is on track to make all K-Cup pods sold in the U.S. recyclable by the end of 2020, having converted all K-Cup pods sold in Canada to a recyclable format in 2018. The new pods are made of polypropylene #5 plastic, a material that is widely accepted curbside for recycling, and the Company has conducted extensive testing with municipal recycling facilities to prove they can be effectively recycled.

Keurig Dr. Pepper has also pledged to source 100% of its coffee and brewers from "recognized sustainable sourcing programs" by 2020,  to send zero waste to landfills by 2025, and to obtain 100% of its energy from renewable sources by that same year.

"KDP now has the scale and ambition to make a real difference to people and our planet, and this report marks an important milestone on our journey as a newly combined company," Chief Sustainability Officer Monique Oxender said in the press release. "We will continue to track our progress and focus on turning ambition into action, continuing our demonstrated leadership in plastics recycling and responsible sourcing, while making new strides in other important areas."

The company has set some lofty goals, but thus far, it has offered limited details on its progress toward them. Aside from noting its specific success in moving to a recyclable K-cup in Canada, the Drink Well. Do Good. report only reiterates the company's goals with regard to the coffee pods.

That's not to suggest it has done nothing: Keurig Dr Pepper has worked with partners to aid in the collection of 180 million pounds of recyclables. It has also worked to support awareness of recycling and make collection bins more accessible.

Company management did say they would expand the availability of recyclable K-Cups in 2019, and detailed an effort that led to businesses recycling 450 tons of material taken from coffee pod components.

Essentially, the company wants consumers to know that it's eventually going to get where it has promised to go without explicitly laying out how much work remains. Most K-Cups in the U.S. continue to not be recyclable but that should change by 2020, it says.

Keurig Dr Pepper deserves credit for its efforts to dramatically cut its environmental impact. Its key goal, however -- significantly reducing the waste from K-Cups -- remains to be delivered upon.