Please ensure Javascript is enabled for purposes of website accessibility
Log In Help Join The Motley Fool
Free Article Join Over 1 Million Premium Members And Get More In-Depth Stock Guidance and Research
By Rich Duprey – Updated Nov 6, 2019 at 8:17AM

Keurig Dr Pepper (DPS) will be making its first quarterly earnings report this week that almost completely laps the merger of Keurig Green Mountain and Dr Pepper Snapple. The deal created a consumer beverage powerhouse, but it also fostered challenges that the company has spent the better part of the year tackling.

With the coffee and soft-drinks giant set to report third-quarter earnings on Thursday, Nov. 7, let's look at what investors might expect to see. 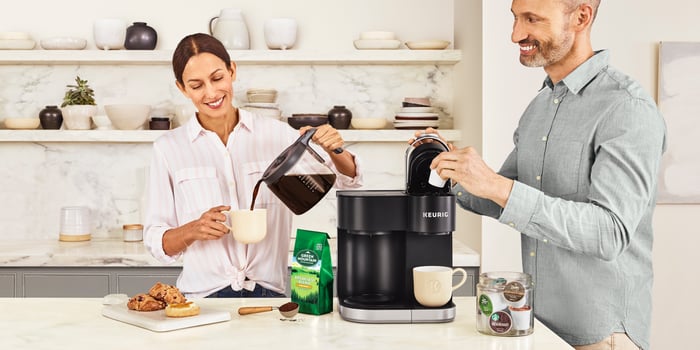 Although Keurig Dr Pepper is seeing healthy underlying growth in sales of its own beverages, net sales, which includes the brands of partners it's contracted with to distribute their beverages for them have been dragging the total down. Such sales of what Keurig calls "allied brands" declined 0.4% last quarter and 1.1% in the first.

Before the merger, allied brands had been an important component of Dr Pepper's sales, accounting for as much as 18% of the total in 2017. But the merger shook up the business, allowing certain brands to exit. Fiji water, for example, which reportedly amounted to 2% of total revenue, chose to exit the partnership and seek distribution on its own. BodyArmor also left.

Keurig Dr Pepper was able to acquire another partner, Big Red, which produces a red soda and several energy drinks, along with CORE Hydration. Other brands included in the allied category are Vita coconut water, Arizona tea, Evian water, and Peet's coffee. Keurig says they account for about 10% of revenue now, meaning they're still a key business for the company.

Despite enjoying the benefits of favorable product mix in its sales last quarter, as well as having raised prices, the weakness of its allied brand more than offsets whatever gains it made.

However, other deals Keurig signed include Tim Hortons coffee, Panera Bread, and more recently, McDonald's. Keurig will be the exclusive manufacturer of the burger joint's McCafe K-Cup pods in the U.S. beginning in the second half of 2020. That's obviously not going to affect third-quarter earnings, but investors have some big growth potential to look forward to.

Keurig is seeing some good volume growth in coffee system sales, which jumped 8.3% last quarter, but that was offset by growth in branded partner pod shipments. Packaged beverages were down as well, affected by the changes in the makeup of its allied brands.

One anchor Keurig Dr Pepper is still dragging around from the merger is the massive debt load it assumed to complete the deal. Long-term debt totaled over $13 billion at the end of the second quarter, giving it a debt-to-adjusted EBITDA ratio of 4.9.

It's been using its ability to produce prodigious free cash flow to pay down the total, and over the first six months of 2019 it has reduced its debt by $707 million, and some $1.65 billion since the merger closed. Although it will continue chipping away at the total, it believes it won't reach an adjusted EBITDA of 3 times debt until the middle of 2021.

Investors may have to wait

Analysts are looking for Keurig to report relatively flat sales in the quarter of $2.86 billion, generating earnings of $0.31 per share, a penny better than a year ago. Gaining a like-for-like view of the business now that it's lapping the merger will help investors better understand its various moving parts, but there may be a lag of some quarters before Keurig Dr Pepper sees any meaningful growth.