Online car retailer Carvana (CVNA 19.54%), known for its glass-framed, multistory car vending machines, dispensed a mixed report to investors on Wednesday after markets closed for trading. The company's third-quarter 2019 earnings were notable, as aggressive top-line growth had failed to provide the company with enough operating leverage to prevent year-over-year losses from widening. As we work through the quarter's details below, note that all comparative numbers are presented against those of the prior-year quarter. 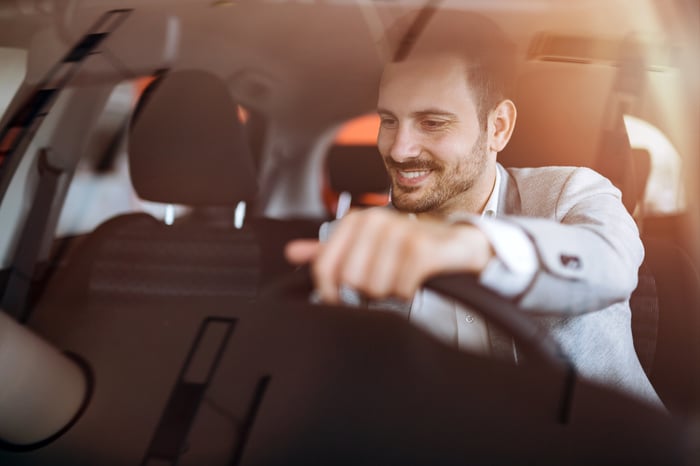 While ex-gift EBITDA margin (i.e., earnings before interest, taxes, depreciation, and amortization, divided by revenue) improved to negative 5.1% from negative 8.3% booked in Q3 2018, investors had anticipated a slightly better result. As I discussed in my preview, midyear performance suggested a third-quarter margin closer to the high end of the company's projected full-year range of negative 5.5% to negative 3.5%.

The company's negative EBITDA, and for that matter its rise in net loss against the comparable period, is due to growth in operating expenses, which are absorbing the benefit of improved gross margin. Selling, general, and administrative expenses jumped roughly 80% to $208 million during the quarter, while interest expense nearly quadrupled to $21 million. The swelling overhead results from higher selling and marketing expenses feeding the company's top-line acceleration, but it's also affected by higher compensation costs as Carvana grows its employee base, as well as expensed items from investments in both digital and physical infrastructure.

Carvana adjusted its full-year outlook heading into the final quarter of the year. The company raised its retail unit sales target to between 174,000 and 176,000 vehicles, which translates to 85%-87% expansion over 2018 sales. This is an impressive adjustment from last quarter's projection of 78%-83% growth.

As for earnings, Carvana doesn't issue per-share guidance. However, the company did tell investors to expect "EBITDA margin ex-gift toward the higher loss end of our negative 5.5%-negative 3.5% range." While this will represent an improvement over 2018's EBITDA margin of negative 10%, investors had likely chalked in a healthier margin projection.

Given this outlook along with a higher-than-expected loss, shares opened roughly 9% lower on Thursday. However, Carvana has still represented a phenomenal investment in 2019 -- shares have returned 66% over the last 12 months.

Carvana Is Down 95% From Its High. Time to Buy?

Carvana Adopts "Poison Pill": What It Means for Investors