Please ensure Javascript is enabled for purposes of website accessibility
Log In Help Join The Motley Fool
Free Article Join Over 1 Million Premium Members And Get More In-Depth Stock Guidance and Research
By Steve Symington – Nov 9, 2019 at 11:00AM

From solid revenue and earnings growth to ambitious share-repurchase efforts, this quarter left little ground on which bearish investors could stand.

Management at Ubiquiti (UI 3.77%) -- formerly known as Ubiquiti Networks -- has never been keen on fulfilling the whims of Wall Street analysts. Heck, the company doesn't provide quarterly financial guidance, seldom holds earnings conference calls, and generally doesn't even announce the dates of its quarterly releases in advance, opting instead to drop the news and let the market scramble to react.

The reaction to Ubiquiti's fiscal first-quarter 2020 report, which hit the wires on Friday morning, was particularly pronounced. Shares of the networking technology company skyrocketed an incredible 36% by the end of the day in response -- the kind of pop typically only reserved for the subjects of mergers and acquisitions announcements.

Let's dig deeper, then, to better understand how Ubiquiti kicked off its new fiscal year, starting with a closer look at its headline numbers relative to the same year-ago period:

Excluding the effects of items like stock-based compensation, Ubiquiti's (non-GAAP) net income similarly rose 14.5% year over year, to $98.7 million, and -- thanks to the impact of share repurchases, including more than 3.6 million shares bought back at an average price of $114.49 per share this quarter alone, for a total of more than $400 million -- rose 23.1% year over year on a per-share basis to $1.44.

For perspective, most analysts were modeling lower adjusted earnings of $1.29 per share on revenue closer to $308 million.

Also of note: Ubiquiti followed by repurchasing nearly 1 million additional shares of stock at an average price of $120.11 per share subsequent to the end of the quarter, effectively exhausting the $500 million repurchase authorization it approved in August (which was initially set to expire at the end of next year). The company followed on Friday by initiating a new $200 million stock repurchase plan. 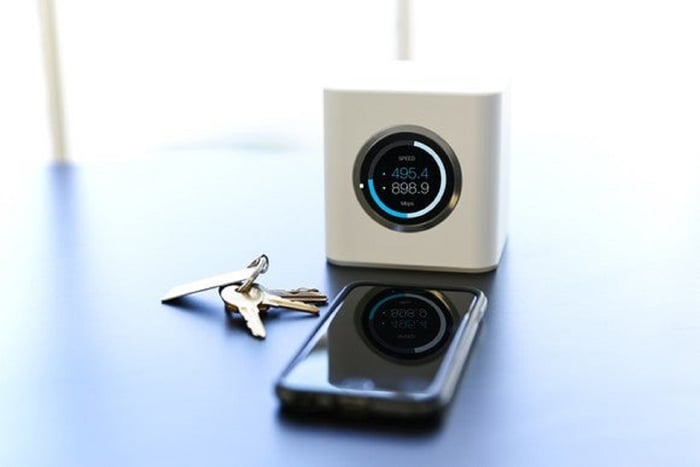 Zooming back out to Ubiquiti's results as broken down by business segment, we can see top-line growth was primarily driven by a 16.5% increase in enterprise technology revenue, which includes its UniFi, mFi, and AmpliFi product lines, to $207.4 million. But revenue was also propped up by 10.5% growth in service provider technology revenue, including its airMax, airFiber, EdgeMAX, and uFiber product offerings, to $115.9 million.

Trending toward the bottom line, gross GAAP gross margin expanded 30 basis points year over year to 46.8%, inching up within management's longer-term targets of between 45% and 50%. The company credited favorable product mix for that improvement, partly offset by the impact of tariffs and "higher indirect costs."

As usual, Ubiquiti didn't hold a follow-up conference call to discuss its results with investors and analysts. But given the gravity of its outperformance this quarter relative to the market's expectations -- and with shares still reeling after a nearly 30% post-earnings decline in May -- it was no surprise to see the technology stock soar to a fresh all-time high this week as investors absorbed the latest state of Ubiquiti's business.