Here's how Roku is making more and more money on its users.

Roku's (ROKU 3.59%) positioning amid intensifying streaming wars as a neutral and leading platform is paying handsome dividends. As it makes money from taking a share of subscriptions and ads on its platform, revenue is soaring -- both on an absolute basis and on a per-user basis.

Highlighting how well the company is monetizing its platform, Roku's average revenue per user over the trailing 12 months is 40% higher than Netflix's most expensive streaming plan. What's particularly surprising, however, is that current trends indicate there's still plenty of upside left for this metric to move even higher.

As the industry-leading TV platform, the tech company has established a powerful network effect in which ad-supported and subscription-supported services want their content on Roku; advertisers want to get their ads in front of its engaged audience; Roku can then invest proceeds from user monetization into its platform; and Roku's audience benefits from breadth of content and Roku's ongoing investments. It's a value-creating cycle both for the connected TV ecosystem as a whole and for Roku specifically. 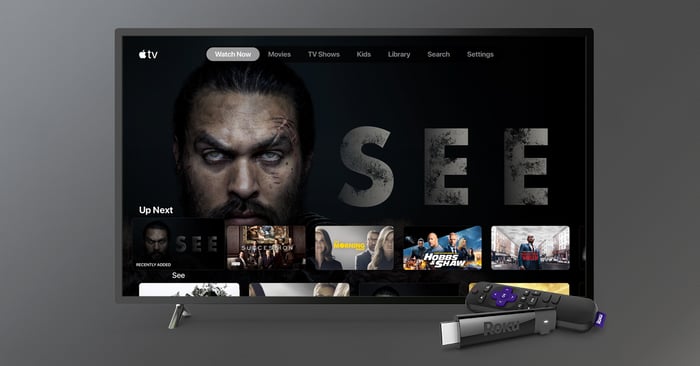 It's no surprise, therefore, that Roku's trailing-12-month average revenue per user (ARPU) is up 30% year over year.

In Roku's third-quarter update, management said its ARPU was $22.58. With 32.3 million active accounts (1.7 million of which were added in Q3 alone), this robust ARPU has helped Roku deliver $633 million in trailing-12-month platform revenue.

The big money is in advertising

While Roku does benefit from subscriptions to third-party streaming services on its platform, advertising is the company's most important growth driver. In fact, monetized ad inventory on its platform more than doubled year over year in Q3 -- a trend that has been consistent with recent quarters.

Looking ahead, Roku believes this is just the beginning when it comes to advertising spending on its platform. Only 3% of TV advertising budgets are currently spent on connected TV, yet connected TV accounts for 29% of U.S. viewing, Roku's general manager of platform business, Scott Rosenberg, noted in Roku's third-quarter earnings call, citing research firm Magna Global.

But if the big money is made in advertising, will the launch of two new major subscription-based streaming services in November -- Apple's Apple TV+ and Walt Disney's Disney+ -- hurt Roku by taking viewing time away from ad-supported content?

Management asserted this wouldn't be the case in the company's earnings call. "Overall, we're excited about the launch of all the new services coming to the industry and to our platform," said Roku CEO Anthony Wood. "[E]ngagement on our platform is very good for us. They're going to increase the interest in viewership moving from traditional TV to streaming."

Of course, Roku has ways to monetize both subscriptions and advertising on its platform. But over the long haul, the big driver to watch will be the shift of the $70+ billion U.S. annual advertising spending away from traditional TV to connected TV.

That $22.58 per user might already seem like a big figure. But Roku's average revenue per user looks poised to climb significantly higher in the coming years as the company's engaged user base continues to attract investment from streaming services and advertisers.