After notching 360% gains going into its third-quarter earnings report, streaming pioneer Roku (NASDAQ:ROKU) delivered results that were better than expected but not good enough, given its meteoric rise this year. The stock fell as much as 20%, before recouping some of its loses and ending the day down about 16%.

The results were mostly what investors had come to expect. Revenue of $261 million, up 50% year over year and an adjusted EBITDA (earnings before interest, taxes, depreciation, and amortization) loss of $0.4 million, resulting in a loss per share of $0.22. The results topped both analysts' consensus estimates and the high end of management's forecast.

For investors willing to look beyond the surface numbers, there was a lot to like, and the conference call provided keen insight into management's view of the future. 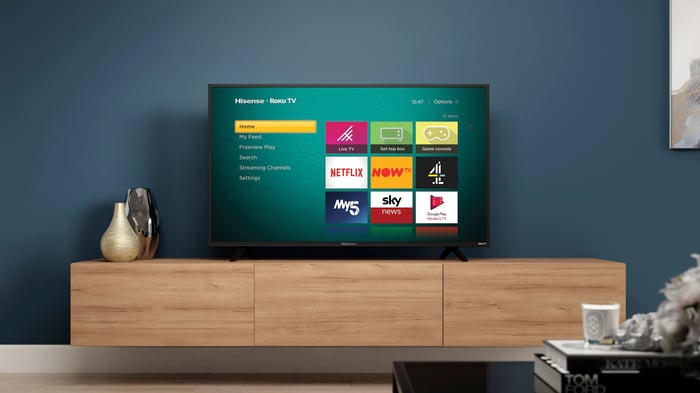 The international expansion is on

Roku plans to take the strategy that worked so well in the U.S. and use that template to expand into international markets, albeit with a few tweaks. The company first worked to achieve scale with its agnostic platform, then monetize later.

The company recently revealed the first major salvo, announcing a licensing agreement with Hisense to bring the first Roku-branded TV to the United Kingdom. The set will feature Roku's cutting-edge operating system (OS), allowing the company to get a cut of the advertising, while viewers get access to their favorite channels from among thousands of choices.

CEO Anthony Wood remarked on the massive opportunity. "There's obviously a lot of potential in international," he said. "One billion TV household around the world. It's a greenfield with a lot of potential." It's worth noting that currently, the Roku OS is found in 1 in 3 smart TVs currently sold in the U.S., making it the No. 1 television-streaming platform in the U.S.

Benefitting from Apple TV+ and Disney+ -- not competing with them

One of the big misunderstandings among investors is the symbiotic relationship between Roku and the upcoming streaming services from Apple (NASDAQ:AAPL) and Disney (NYSE:DIS). When Apple announced the launch date of Apple TV+, shares of Roku fell 12% -- a clear indication of the disconnect. Investors reacted as if these services would be competition to Roku, when nothing could be further from the truth.

Roku's platform provides its audience with thousands of streaming choices to customize their viewing experience. Both Apple TV+ and Disney+ will be available on Roku's platform, increasing the company's competitive advantage. Wood said:

We're excited about the launch of all the new services coming to the industry and to our platform. We think that they are good for Roku in a bunch of ways. They're obviously going to drive viewing overall on our platform and engagement which is good ... They're going to increase the interest in viewership moving from traditional TV to streaming. We think that eventually all TV is going to be streamed and that the rise of all these new services will help encourage that transition.

Wood went on to say that customers on the Roku platform watch paid premium services and ad-supported services, and the company benefits from both. Roku gets a cut when viewers sign up for paid services via its platform and capitalizes on advertising when they watch ad-supported programming. Scott Roseberg, the head of the company's platform business said, "We're mutually incented to drive the success of these services through the Roku ecosystem." Said another way, when its partners win, Roku wins.

A bigger push into advertising

Late last month, Roku announced that it would acquire DataXu, a demand-side advertising platform. The system helps marketers plan and buy video ad campaigns. That deal closed on Friday, and Wood was eager to discuss the opportunity.

Currently, the majority of the advertising Roku sells is direct. In the coming years, however, Wood believes ad buying will "become more automated over time and this acquisition's primary goal is to accelerate our road map for our ad tech."

CFO Steve Louden went further, saying the acquisition helped Roku "work with a broader spectrum of clients ... We are combining the unique advantages of Roku's first-party consumer relationship, our scale, our proprietary data and inventory together with some great talent, device graph technology, data science capabilities from DataXu."

It's important to note that Roku's platform business, which includes advertising, The Roku Channel, and its television operating system, is by far the company's most profitable business. In the third quarter, platform revenue grew to $179 million, up 79% year over year and accelerating from 74% growth in the prior-year quarter. At the same time, it's the most profitable, with gross profit margins of nearly 63%. It's little wonder Roku would be eager to expand this business.