The markets have been doing very well over the past several weeks, and finding some good bargains has been a bit challenging of late. However, there are still some good deals out there, with the three dividend stocks listed below offering investors a good opportunity to lock in a higher-than-normal yield, since their share prices have been underperforming.

Canon (NYSE:CAJ) has had a pretty mediocre year and while it has recently rallied, the stock is still flat year to date. It saw a big decline in mid-July when the company reduced its forecast as a result of slowing demand from China. Canon now expects its profits to be down by about 37% from the prior year.

However, that's likely due to the economy in China as a whole starting to slow down. Over the long term, there's still a lot of potential growth in that part of the world, especially once things pick up again and trade issues get resolved between China and the U.S. Canon is still a premier camera brand in the world, and investors shouldn't count out the stock just yet.

The good news for investors is that they're able to pick up the stock at a reduced price since it's coming off lows not seen in a decade. While there will be fluctuations in currency, currently investors will be earning a dividend of 5.4% per year. There is some risk investing in Canon, especially relating to China, but with a solid brand and strong financials, the stock could be a bargain as it is trading near its book value. 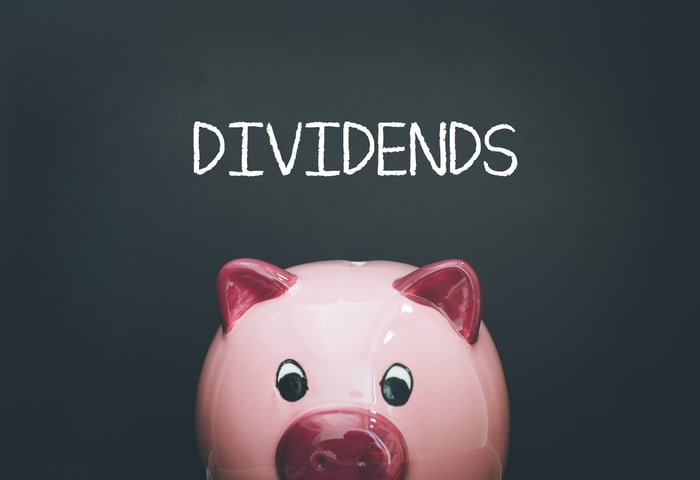 CBS (NASDAQ:VIAC) has been on a significant decline over the past 12 months, falling close to 35% in value. It was about a year ago that the stock started to crash when the company announced that Les Moonves would no longer be its chairman amid news that Moonves was facing numerous sexual misconduct accusations.

And then in August, the stock declined after investors learned that CBS would merge with Viacom (NASDAQ:VIAB) in an all-stock deal. The expectation is that the merger will be completed sometime in December. For dividend investors, it's a great opportunity to benefit from a much larger, combined company that will have more resources. CBS currently pays investors a dividend of around 2%, while Viacom's yield is much higher at 3.7%.

With content providers facing growing competition and more streaming options available for consumers, it's going to be more important than ever for CBS to have the resources it needs to be able to stay competitive, and the merger certainly helps give it that capability.

Luminex (NASDAQ:LMNX) has also run into some challenges this past year. Inconsistent financial results have been a bit of a problem for the biotech company, and that didn't change in its Q3 results, which were released earlier this month. Although revenue was up 8.6% from the previous year, it fell short of expectations, and the company posted a loss for the third time in the past four quarters.

While that might be concerning for investors, it can also be a little misleading. The company has done a good job of generating positive free cash flow and continued to do so this past quarter. Free cash flow of $4.5 million was more than enough to cover the company's dividend payments totaling $2.7 million. Noncash items like depreciation and amortization can sometimes take out a large chunk of the company's earnings and paint a worse picture than what is really the case.

Although the stock dipped as a result of the earnings report, that makes its $0.09 dividend, which was recently increased, that much better as it is now yielding close to 2% per year. The healthcare stock has customers all over the world. Its testing technologies could continue to see strong demand, making the stock an attractive investment with it trading near its 52-week low and less than two times its book value.

There's always going to be some risk investing in dividend stocks that are near their 52-week lows. After all, they've declined for a reason. But these three stocks each have a lot going for them that should make them quality long-term investments. While Luminex may not benefit from the brand recognition that the other two companies can lean on, it could arguably have more potential upside given its more modest market capitalization of $730 million.