The Dow Jones Industrial Average (DJINDICES:^DJI) gave up early gains and ended Tuesday down 0.05%. President Trump warned in a speech that the U.S. would increase tariffs on China if the first phase of a trade deal isn't reached.

Entertainment juggernaut Disney launched its Disney+ streaming service on Tuesday, bringing its vast catalog of content to anyone willing to pay $6.99 per month. The launch had some hiccups, with users complaining on social media about technical problems, but Disney should have no problem attracting customers as long as those issues are fixed quickly.

Shares of Disney were up 1.2% as investors focused on the reason behind the technical issues -- demand that exceeded the company's expectations. 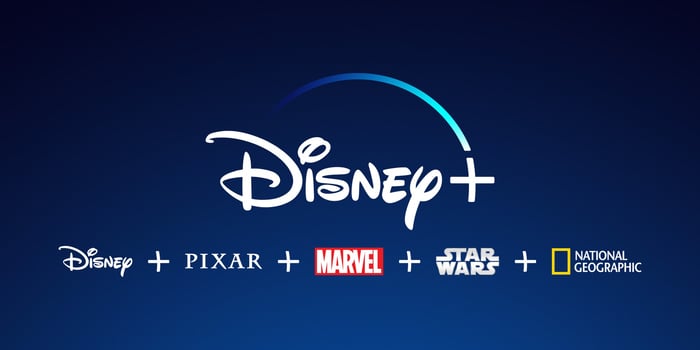 Disney has set aggressive goals for its new streaming service. The company expects to have between 60 million and 90 million users by 2024, with most of them in overseas markets. That would translate into billions of dollars in annual revenue, even if Disney doesn't raise prices anytime soon.

At $6.99 per month, or $69.99 annually, Disney has priced Disney+ well below the most popular Netflix plan. Netflix charges $12.99 per month for its standard plan, the cheapest option that includes HD streaming, more than double what annual Disney+ subscribers will pay. Many households may opt for both services, but Netflix investors should be on the lookout for increased churn now that Disney+ is available.

With the strength of Disney's content and a low price point, there's every reason to believe the company will quickly become a major player in the streaming market.

Cisco has a lot to prove

Shares of networking hardware supplier Cisco have been beaten down over the past few months. Somewhat weak guidance issued in August put pressure on the stock, and an abysmal outlook from smaller competitor Arista Networks in October only made things worse. Cisco stock is down about 17% from its 52-week high.

Cisco will have an opportunity to change investors' minds on Wednesday. The company is scheduled to report its fiscal first-quarter results after the market closes. Cisco's guidance calls for revenue growth between 0% and 2%, with adjusted earnings per share of $0.80 to $0.82.

While Cisco's products are sticky, with high switching costs allowing it to maintain its dominance, the company is highly sensitive to global economic conditions. When large customers push back upgrades or delay orders because of uncertainty, it can lead to sales declines for Cisco. On Monday, analysts at Piper Jaffray cut Cisco stock to "neutral" because of a slowing macroeconomic environment.

A decent outlook from Cisco may be enough to send the stock soaring, given the pessimism that's been building. But a weak outlook would only confirm that Cisco is starting to feel some pain from the macroeconomic environment.