Please ensure Javascript is enabled for purposes of website accessibility
Log In Help Join The Motley Fool
Free Article Join Over 1 Million Premium Members And Get More In-Depth Stock Guidance and Research
By James Brumley - Nov 12, 2019 at 11:39AM

Macy's, J.C. Penney, and several rivals are adapting, but they might need to think bigger and work faster.

The symbiotic relationship between department stores and the malls they anchor isn't exactly a secret. Mall managers rely on major chains to drive foot traffic, and department stores count on mall operators to keep smaller tenants in place to meet the specialized needs larger players can't. Indeed, the massive growth of iconic outfits like Macy's (M 9.91%), J.C. Penney (JCPN.Q), and Dillard's (DDS 6.58%) between the 1970s and 1990s went hand in hand with the establishment of shopping malls, which at that point were becoming fixtures of America's cultural identity.

Shopping has evolved, of course. The advent of e-commerce options has made it easier to avoid the time-consuming hassle of the mall, cutting department store revenue nearly in half since 2000. Smart department stores have adapted by turning some of their spaces into entertainment and even dining venues. It's working, too. But fresh data suggests these innovations are not yet common enough or effective enough to alter the department store industry's deteriorating trajectory.

The new Nordstrom (JWN 5.42%) store in New York City offers the apparel selection one would normally expect to see in a department store, but that's hardly where customers' options end. The recently opened locale boasts four different restaurants, two bars, and will even bring food to you while you're shopping. At the same time, the JCPenney store at North East Mall in Hurst, Texas, has been reconfigured with spacious lounging areas, a fitness studio, a cafe, a barbershop, and more. CEO Jill Soltau says the new shtick is "the fullest articulation of our brand strategy and we're going to use [it] as a lab." 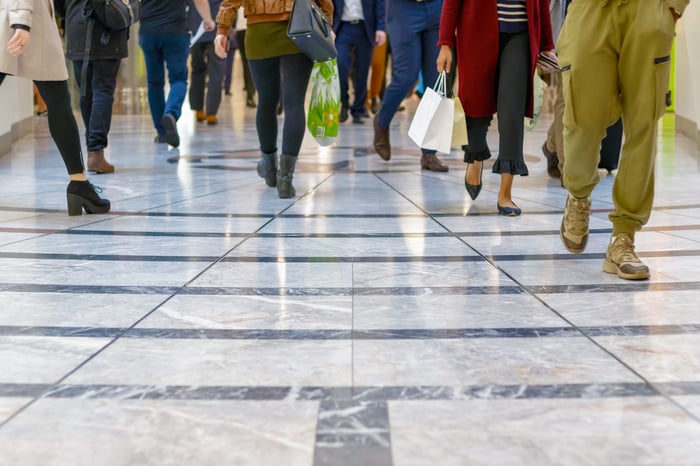 It's not just department store chains embracing the concept, though. Malls are getting in on the act too. The American Dream Mall at the Meadowlands in New Jersey recently unveiled its indoor theme park -- complete with roller coasters, an indoor ski slope, and an ice skating rink.

They're all microcosms of the new normal in the department store business, reflective of entertainment- and amenity-hungry consumers. But they may still not be enough to draw shoppers into stores and induce actual purchases.

That's the concern raised by a recent UBS survey of 2,500 consumers, anyway. The organization found that the percentage of respondents who go to a mall specifically to shop at a department store fell from 25% a year ago to only 20% now.

Where are they going? "Shoppers say they increasingly go to the mall to eat at the food court or just hang out instead of visiting a big box store," explained UBS analyst Jay Sole. He goes on to say, "Since the mall is no longer the place consumers discover fashion, it makes sense the reasons they visit the mall are changing." The number of consumers who specifically go to the mall to eat is still only a modest 7%, though that's up from 4% at this time last year.

The internet isn't helping, obviously, as more consumers learn how to buy clothes online, and that shift is only going to become tougher for brick-and-mortar chains. Roughly one-fourth of apparel shopping is now done online. By 2023, that figure is expected to be closer to one-third.

UBS says all the underlying trends work against all department stores, though it specifically named middle-class/middle-income venues Macy's and J.C. Penney as being particularly vulnerable.

To its credit, the department store industry is on the right track. Adding restaurants to the mix is a bold step to be sure, as is introducing services like haircuts and styling help. But as HeadCount Corp. CEO Mark Ryski commented in retail industry trade publication RetailWire, "Traffic for the sake of traffic does retailers no good." His prescription for players like Macy's, Penney's and Nordstrom? "Food courts, waterparks and skating rinks are all well and good, but retailers need to provide shoppers with reasons to visit their stores, and not just rely on mall walkers to stumble upon their stores."

What that specifically looks like is still mostly unknown. Consumers just seem to be saying, with dollars, that they've not seen it yet.